The big news of the last week has been the unexpected and mandatory shift in COVID-19 data reporting away from the Centers for Disease Control and directly to the US Department of Health and Human Services. It was done with minimal communication and in the middle of a pandemic, which isn’t the ideal scenario for any IT project. I guess the contractor involved had never heard of setting up a parallel system and validating data or having a robust cutover plan, let alone involving stakeholders and end users in the testing.

Needless to say, more than 100 industry groups have signed on to a letter asking the White House to reverse the shift. The major concerns revolve around transparency and data availability, but the undercurrent of public health policy versus politics is a factor as well.

Small news of the week includes a reprieve for Elizabeth Holmes, whose trial might be delayed until 2021 due to COVID-19 concerns. The trial was scheduled to start in October, but attorneys argued via Zoom that moving ahead with a trial would create risk. More than 170 people from 14 different states are on the witness list, with more than a dozen of them being high risk due to age. An August hearing will determine the exact date for a new trial.

This week has driven me to the maximum level of frustration with regards to COVID-19 testing. We are now seeing patients who have had five or more COVID tests because they continue to engage in risky behavior and “just want to get checked out.” We’re also running into employers who are requiring negative tests before allow patients to return to work. Those who have multiple positive tests but who are no longer considered contagious by the CDC standards are subjected to unnecessary medical procedures as they continue testing, which also takes away supplies from other patients. Employers are requiring testing of workers who have even remote contacts with potential patients, wasting more supplies.

We have been out of rapid testing kits for weeks, but somehow the NFL, NBA, their respective employees and the media have access to them. This is in the context of announcement that the US is trying to reduce unnecessary COVID testing. As far as I’m concerned, the message can’t get to these employers soon enough.

I also had my first patient come back in for a visit hours after he was texted with his positive COVID result, for a re-test “just to be sure, because it might be a false positive.” Hate to tell you, sir, but (a) you are still quarantined regardless of the outcome of this second test; and (b) congratulations on exposing my office staff, me personally, and everyone you might have come into contact with along the way. We had a difficult conversation which I’m sure will lead to a one-star or zero-star review, but at this point I say “bring it,” because in many ways, it would be relief to just get fired by my ratings-centric employer. I hate that the pandemic is turning something I used to love (seeing patients in person) into something I sometimes dread, and that it’s being driven largely by economic forces. 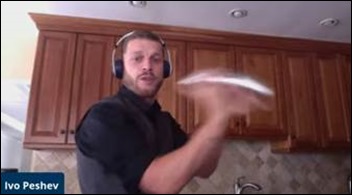 I found some time to recharge my batteries this week and enjoyed attending the Telehealth Innovation Forum on Tuesday and Wednesday. It was a welcome break from what I’ve been doing for the last several months. The sessions were engaging as well as fun. Tuesday’s end-of-day session included a live martini class, where we learned tricks of the trade. I was glad to learn that the way I shake my martinis is how the pros do it, but apparently I’ve been holding my jigger wrong.

Wednesday we had our volunteer activity of decorating backpacks that will be filled with school supplies and sent to Puerto Rico, while learning about the World Telehealth Initiative. As much as we think about telehealth as a convenience in some countries, it’s striking to realize how much of a true game-changer it can be in developing nations. Thanks to the many sponsors that made this activity possible and to Teladoc Health for putting it all together.

The US is still pretty keyed up about the promise of telehealth, although a new survey from Sage Growth Partners and Black Book Research highlights that many organizations anticipate a decline in telehealth volumes over the next year. Respondents cited lack of integration and/or interoperability as a key reason for dissatisfaction, along with a lack of data needed for continuity of care. Payment issues also made the list.

I say the jury is still out, because we have no idea what will happen when flu season starts and other respiratory pathogens start rolling in. If you’re still using Zoom to try to deliver virtual visits and haven’t begun the transition to an integrated system or one that at least plays nice with your EHR, I suggest you start looking.

In other telehealth news, I received an email announcing the “HHS Telemedicine Hack,” which is apparently a 10-week virtual learning community aimed at accelerating telemedicine implementation among ambulatory providers. The program includes various online panels and presentations along with virtual discussion boards. It runs from July 22 to September 23. I wonder if I’m the only one who thought it was weird that they announced it after it had already started. I read my CMS emails pretty religiously and searched both my voluminous inbox and my trash without finding any other announcements.

The American Board of Surgery admits a complete meltdown of its online general surgery board qualification exam last week. Candidates describe a “nightmare” scenario where morning test-takers finished Day One of two, but afternoon testers had technical issues, so the entire test was canceled early Friday morning. The Board promises to “regroup and develop a new process.” Candidates were also frustrated that the Board was communicating via Twitter rather than directly with them through email, citing delays in mass emails to over 1,000 impacted surgeons as an explanation. 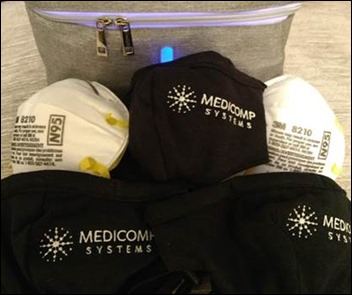 The absolute highlight of my week was a care package from the folks at Medicomp Systems. The company is a Founding Sponsor of HIStalk, a former sponsor of HIStalkapalooza, and has supported our favorite charities as we’ve competed on their game show stage at past HIMSS conferences. Along with a UV sanitizing bag for my constantly rotating supply of masks, they managed to source some coveted N95 respirators from 3M as well as classily embroidered multi-layer masks that have both a bendable nosepiece and adjustable straps. They are the “little black dress” of masks.

Given our current situation, I’m thinking of shifting my love of shoes to one of stylish masks. A patient had on a bedazzled mask last week, so there’s plenty of opportunity for creativity and style. I’m touched that they would think of me and sincerely appreciate the additions to my PPE wardrobe.

What’s the sassiest mask you’ve seen? Leave a comment or email me.