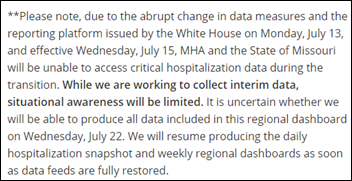 Hospital associations in Missouri and Kansas warn that HHS’s abrupt change in hospital reporting leaves them unable to update their state COVID-19 dashboards and planning data.

HHS gave just a few days’ notice for hospitals to send data to the new HHS Protect portal, whose required data elements differ from those that had been sent to CDC’s National Healthcare Safety Network.

The hospital associations say they don’t have access to HHS Protect.

The National Governors Association has asked the White House to delay the new hospital data submission requirements for 30 days.

From Former KP: “Re: Kaiser Permanente and Epic. I was a KP IT executive at the time, and while Cerner may have made such an offer of basically free software in return for CERN shares (which I would not have been aware of in my role), the selection team of IT and clinical leaders made a single recommendation of Epic. The business case was developed exclusively on Epic for inpatient, outpatient, and all related specialty areas.” 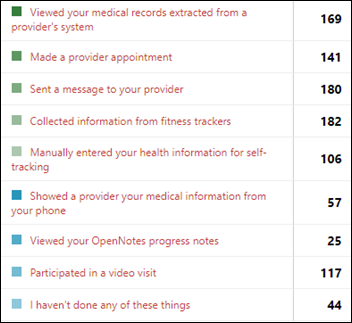 Most poll respondents have done something health-related on a mobile device in the past year, most commonly collecting fitness tracker information, sending a message to a provider, or viewing their medical records as extracted from a provider’s EHR.

New poll to your right or here: which activities have you undertaken in the past month?

Keith Hepp, SVP/CFO at The Health Collaborative and and board chair of the Strategic Health Information Exchange Collaborative, died last week. 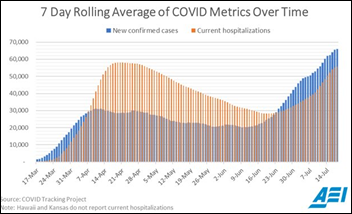 COVID-19 hospitalizations are closing in on April’s record, although a lower percentage of admitting patients are ending up in the ICU. US deaths are at 142,000.

The White House blocks CDC officials from testifying this week at Congressional hearings about how to safely reopen schools.

A report from the National Academies of Science, Engineering and Medicine says that elementary school and special needs children should return to in-person education, but with group activities minimized, physical distancing enforced, surgical masks worn by all teachers and staff members, and cloth facemasks worn by all students. The report did not address the question of the community viral level threshold that would make it unsafe for schools in specific areas to reopen.

CDC will change its recommendation that COVID-19 patients be retested before ending their isolation. White House testing coordinator Admiral Brett Giroir, MD says retesting is not medically necessary and is overwhelming the country’s testing system. CDC will recommend that isolation end when the patient has not experienced symptoms for at least three days, provided that at least 10 days has elapsed since they first experienced symptoms.

FDA gives emergency use authorization to Quest’s PCR test for pooled samples that contain up to four individual swab specimens, allowing more people to be tested while using fewer resources. If the pool is positive, the individual tests are re-run individually to determine which pool members are positive.

A New York Times investigation says overly rosy COVID-19 projects by White House Coronavirus Task Force Coordinator Deborah Birx, MD encouraged President Trump to prematurely pursue reopening with lax thresholds and to push coronavirus response from the White House onto individual states. Birx convinced staffers from her White House office that the virus was fading, leaving only “embers” to fight as she relied heavily on assumption-laden models didn’t take lifting of mandates into account. She believed the US would mirror Italy, which was entirely wrong as that country’s residents were compliant with stay-at-home orders and distancing as many Americans started ignoring them as early as late April. 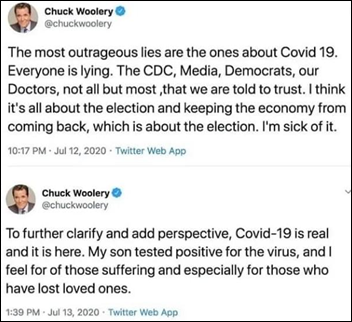 Former TV game show host Chuck Woolery, whose Sunday tweet accused clinicians and others of lying about COVID-19 to hurt President Trump’s re-election chances — a tweet that was then retweeted by the President — takes down his Twitter in announcing a few hours later that his son has tested positive. A spokesperson for the former “Love Connection” host says Woolery is “taking a break from the abuse he has received from thousands of intolerant people.” 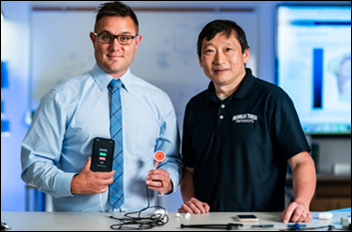 I missed this earlier. Two BYU professors, one in nursing and one in IT, develop a homegrown, $20 open source Bluetooth stethoscope that allows clinicians to listen to a patient’s heartbeat at up to 50 feet away while still wearing PPE. The 3D-printed device also records the audio for later review. Commercial devices perform similar functions for several times the price. 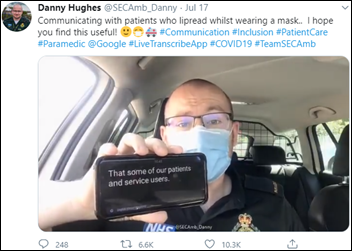 In England, paramedic Danny Hughes provides a video example of using real-time transcription such as Google Live Transcribe (for Android only) to communicate with the hearing-impaired when the speaker’s mask prevents the patient from reading their lips. 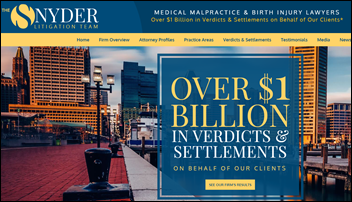 Maryland’s attorney grievance commission reviews a complaint against a high-profile medical malpractice attorney who was recorded by the FBI as he told University of Maryland Medical System that he would keep quiet about deaths and other problems in its transplant program if the health system paid him a $50 million consulting fee. Attorney Stephen Snyder, who learned about the problems in representing malpractice clients, says he himself is the victim because of his offer to “help prevent any future tragedies.”