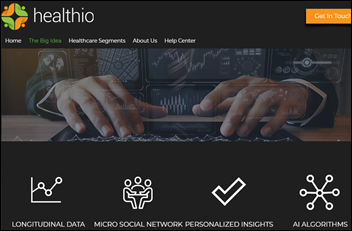 From Lab Matters: “Re: article titles. I see some that capitalize just the first letter of the first word, while others capitalize each word. Am I stuck in the grammar rules of the past? Please help settle my existential conflict.” I capitalize each word because a title looks like a weird sentence to me otherwise. Not to mention that the style guides of AP, APA, Chicago, MLA, and New York Times all agree that the first, last, and important words of an article’s title should be capitalized. However, a recent AP change suggests using “sentence style” for headlines and websites, where only the first word and any proper nouns are capitalized in a “Hawaiian shirt Friday” kind of formally dictated informality. This would be one of a few cases in which I disagree with AP since it seems to be bowing to those who didn’t know or didn’t follow its longstanding rules, although I acknowledge that sentence case is probably a bit easier to read as long as it is used consistently within the same website. I resolve my existential conflicts on style by carefully thinking through the options, choosing the one that makes most sense to me, and sticking with it, and in the spirit of grammatical harmony in the title capitalization question, I use the original style rather than my own when I cite an article from elsewhere. Let’s not even acknowledge that some health IT vendor website capitalize all letters in their press release and blog titles, maybe the same ones that insist on capitalizing all the letters in the company’s name (which gets put right back to first-letter-only here per AP style). 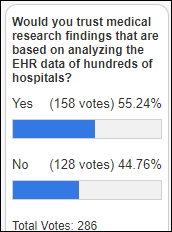 Folks who work in health IT are nearly evenly split over whether they would trust research findings based on aggregated EHR information.

New poll to your right or here: How will the use of virtual provider visits change between now and June 2021? 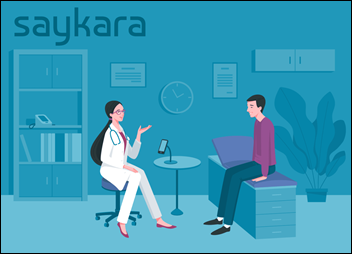 Welcome to new HIStalk Platinum Sponsor Saykara.The Seattle-based company is working to combat the epidemic of physician burnout that has surfaced from increasingly burdensome documentation requirements and time spent on EHR data entry. They’ve built the first fully ambient and autonomous AI-powered assistant for physicians. Their iPhone app, named Kara, listens to physician-patient conversations, then interprets and transforms the salient content required for notes, orders, referrals, and more, and enters both structured and unstructured data directly to the EHR. Kara is specialty agnostic and being used by doctors all across the country. Data shows that time spent charting is reduced by an average of 70%, after-hours (“pajama time”) charting is eliminated, and note quality and completeness is enhanced by 25%. Saykara was founded in 2015 by Harjinder Sandhu, a serial healthcare technology entrepreneur and former Nuance executive who has stood at the forefront of innovations in speech recognition and machine learning for more than 20 years. See their video featuring doctors from Hancock Health. Thanks to Saykara for supporting HIStalk.

The investment firm owner of Clinical Ink is putting the drug clinical trials electronic tools company on the market after owning it for two years.

A false claims act whistleblower lawsuit brought against EHR vendor Medhost and Community Health Systems by two former CHS IT executives is dismissed, with the judge saying that the “heaps of alleged facts” that were presented don’t prove the claimed misconduct.

One-fifth of US nursing homes have less than a week’s supply of PPE on hand despite the federal government’s April 30 promise to help them with their needs to address COVID-19, which has killed 43,000 residents. Many have not received PPE shipments, some received only cloth masks and low-quality ponchos, and most say the quantities they received will last only a few days. The head of one Catholic nursing home group concludes, “The federal government’s failure to nationalize the supply chain and take control of it contributed to the deaths in nursing homes.”

A Seattle man who recovered from COVID-19 after a 62-day hospital experiences survivor’s guilt after seeing his hospital bill of $1.1 million, which doesn’t include the two-week rehab stay that followed. Medicare will cover most of his bill and he may pay nothing because of the federal government’s COVID-19’s bailout money, which the Seattle paper says is “like we’re doing an experiment for what universal health coverage might be like, but confining it to only this one illness.”

Rates of new cases and test positivity are trending up in Arizona, California, Florida,and Texas, suggesting that hospitalization and ICU bed usage will be increasing to possibly dangerously high levels over the new few weeks.

A new study of COVID-19 in Japan finds that symptom-free people aged 20-39 were most often the source of primary exposure, while healthcare facilities were most often involved. The authors also conclude that close-proximity singing, cheering, exercising, and bar conversation were associated with many of the clusters.

Former Mass General Brigham and Cerner executive John Glaser, PhD makes the case to redesign EHRs around the patient-clinician medical plan rather than their current role as a place to record the byproducts it generates. He advocates keeping existing EHRs while addressing specific needs via wrap-around modules that providers can buy to meet their specific challenges (population health management, HIEs, patient-facing apps, and analytics). The next-generation EHR should include: 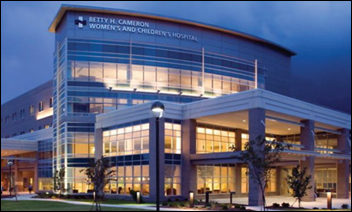 County-owned, 647-bed New Hanover Regional Medical Center (NC) entertains acquisition and partnership offers from the state’s big health systems, with Duke Health offering $1.35 billion, Novant committing to $1.5 billion at closing and $2.5 billion in improvements, and Atrium Health offering a 40-year lease at $28 million per year and along with $2.2 billion in improvements.

Epic sends an internal email only to its diversity, equity, and inclusion employee groups, warning them that they should not participate in a virtual walkout in support of Black Lives Matter. Some white employees complained to the local paper that the email should have gone to everyone.The company also updated its employee policy to limit use of company resources for work purposes.

In Canada, the medical association of Newfoundland and Labrador complains about the government’s new app that connects people with a nurse practitioner in an extension of its 811 HealthLine telephone program. The doctors are unhappy that they weren’t consulted and are worried that the NP won’t see the patient’s electronic record, but the health minister says that’s a problem in general because some doctors use paper charts, some use an EHR, and some use Meditech’s regional implementation. He adds that the service was launched because people are happy with their virtual visits with doctors and they are equally effective as face-to-face visits in most cases, also noting that doctors don’t have a monopoly on providing healthcare services.