Daniels joined the organization in 2008. He reports to Kaiser Permanente Chairman and CEO Gregory Adams. His retirement will be effective in mid-June.

From Gary: “Re: your Top Healthcare Leader nomination. The photo you included really conveys how prestigious that award is. Still, if there was an award for someone who provides value to me as a healthcare professional, you would be on the top of my list – no joke. I have been a daily reader of your blog for as long as I can remember because you not only provide timely, valuable information but also because of the humorous notes like the above. Thank you for all you do to inform, educate and amuse.” You made my day – thanks. I’m especially contemplative and appreciative as HIStalk approaches its 17th birthday in a few days. 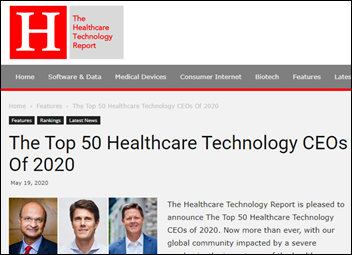 From HCITMasterClass: “Re: your Top Healthcare Leader nomination. Here’s another one you might find fun.” The Healthcare Technology Report lists its “Top 50 Healthcare Technology CEOs of 2020.” This outfit isn’t as scammy as others I’ve noted and its writers appear to be closer to native English speakers than its lower-rent competitors, although it carefully protects its anonymity by offering no address or employee lists. I Google-stalked its phone number and found that the owner is ZenLeads (dba Apollo) which sells lead generation software and databases from co-working spaces in San Francisco and Phoenix. It runs a maze of publications across unrelated industries, all of which seem to issue similar “top executives” awards. My interest in crappy news and awards sites isn’t that they attempt to extract cash in playing to executive egos since that’s apparently a viable market – it’s to see which of their featured authors and award winners proudly tout their “gosh, I sure love me” accomplishment.

From Swing Bar: “Re: HIMSS. Will they make a run at your HISsies ‘worst vendor’ and “stupidest vendor strategic move’ awards over their HIMSS20 refund policy?” Quite possibly, depending on the mood of readers in early 2021 when I conduct the nominating and voting. Egotistical behavior usually has an influence, and by many reports, HIMSS is still being terse in steadfastly defending its claimed lack of flexibility in offering HIMSS20 refunds. My experience is that it is not unfortunate or self-inflicted events that harms an organization as much as a lack of humility or commitment to change in its response to the event. We will see the full impact only when the HIMSS21 site is launched, which will include the available exhibit hall space. HIMSS may even hide that Freeman-produced floor map out of fear of creating a bandwagon effect that will reduce exhibitor and attendee registrations even further. Meanwhile, Las Vegas still has hotel deals available for HIMSS21 dates while bypassing HIMSS and OnPeak, with Harrah’s going for $69, Bellagio for $199, Caesar’s Palace for $149, Flamingo for $63, Excalibur for $40, and Luxor for $53 (upcharges over the previous non-nonconference week are modest). All hotels are offering the free, flexible cancellations that HIMSS does not. The Venetian is $483 and that makes me wonder if it’s the only hotel that HIMSS has locked down so far.

Only about 10% of poll respondents expect their family’s financial security to be a lot worse 18 months from now.

New poll to your right or here: What will your job look like a year from now? 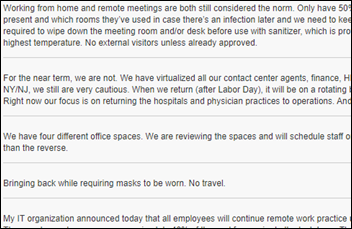 Thanks to the provider IT folks who shared their plans for returning employees to campus. 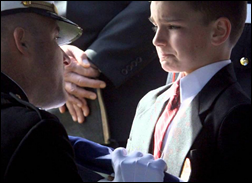 People are fretting how they’ll spend their Memorial Day summer kickoff given coronavirus restrictions and concerns, but here’s an idea – use a subset of the time as it was intended to honor those who died while serving in the armed forces. You don’t have to be a fan of the military to support those who signed up voluntarily, were paid little, disrupted their families, and died carrying out the task that was assigned to them.

In Flanders Fields
By John McCrae

In Flanders Fields the poppies blow
Between the crosses row on row
That mark our place; and in the sky
The larks, still bravely singing, fly
Scarce heard amid the guns below.

We are the Dead. Short days ago
We lived, felt dawn, saw sunset glow,
Loved and were loved, and now we lie
In Flanders fields.

Take up our quarrel with the foe:
To you from failing hands we throw
The torch; be yours to hold it high.
If ye break faith with us who die
We shall not sleep, though poppies grow
In Flanders fields.

FDA’s Sentinel Operations Center at Harvard Pilgrim Health Care Institute is working with TriNetX’s global health research network to monitor priority drugs that are being used for treating hospitalized COVID-19 patients, studying its real-time, de-identified COVID-19 data set to review utilization and safety of drugs being used in the field.

Only 60% of states report COVID-related hospitalizations, but of those that do, Florida, Alabama, Georgia, Wisconsin, Virginia, Minnesota, and Ohio are all reporting upticks. Hospitals in some large Alabama cities have no ICU beds available, while Minnesota’s COVID units are full.

President Trump vows that “we’re not going to close the country” if predictions of a second wave of COVID-19 in winter turn out to be true.

In a “good news, bad news” item, scientists say that lower levels of virus circulation in summer will push clinical trials of vaccines back into the fall.

A NEJM-published preliminary report on using remdesivir in hospitalized COVID-19 patients with lower respiratory tract involvement finds that recovery time was 11 days versus 15 for placebo. Expected death rates were 30% lower, but the study was stopped early and thus doesn’t prove that survival odds were improved. The drug’s benefit seems most significant in early-stage patients with less-severe symptoms, but study design influenced that finding as well.

A large-scale, observational study finds that widely hyped drugs hydroxychloroquine and chloroquine did not improve COVID-19 outcomes and were associated with heart rhythm problems and higher death rates, the same conclusions that previous observational studies reached.

Updated CDC guidance says COVID-19 doesn’t spread easily from touching surfaces or objects – it’s getting near your fellow humans you have to worry about.

Another round of studies finds that COVID-19 PCR tests for active infection continue to register as positive long after a recovering patient is free of infection and thus not contagious, because the tests detect dead virus. That makes clearing patients for a return to work more difficult.

Former FDA Commissioner Scott Gottlieb, MD says China is developing its COVID-19 vaccine efforts around the old-school method of using inactivated virus, while the US is focusing in newer, less-proven technology that should provide a better result. His conclusion is that China is focusing on being “first to get shots in arms” even though the resulting protection will not be broad. 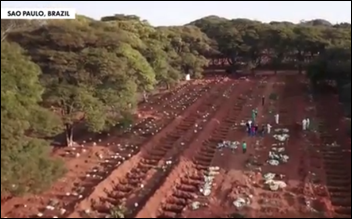 President Trump suspends travel to the US from Brazil three weeks after it became the world’s new pandemic epicenter even as its president has called COVID-19 a “little flu,”refused to implement lockdowns, and has promoted chloroquine treatments. Cities there are digging fields of mass graves and two health ministers have departed in just four weeks after conflicts with President Jair Bolsonaro. Brazil officially reports 360,000 cases and nearly 23,000 deaths, second only to the US, and a study says the real numbers likely higher than those being reported, perhaps as much as 12-fold. 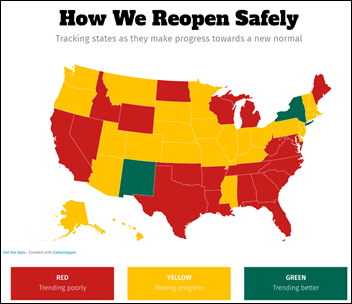 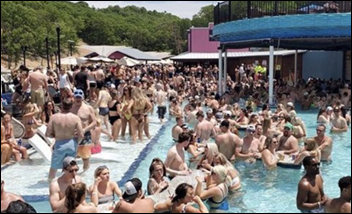 The US COVID-19 death toll will likely hit 100,000 this holiday weekend and the virus remains all around us, including at Lake of the Ozarks, Missouri, where they’re partying like its 2019. Perhaps there’s an obvious reason that we have one-third of the world’s cases and deaths. It’s not really Darwin Awards territory when these folks may walk away unharmed but kill unfortunate others due to their lax behavior.