I’m always on the lookout for good outcomes from all the work that goes into EHRs. I enjoyed reading about an EHR “nudge” that was shown to reduce inappropriate testing for the nasty C. difficile infection. The system flags patients with contraindications to testing and the authors looked at data across four hospitals ranging two years before and after the intervention. The percentage of inappropriate orders fell by 2% with the intervention, and overall orders were down 21%.

I attended a medical seminar this week and was surprised that no one is modifying their behavior in response to flu season or even fears of coronavirus. Still a lot of hand shaking going on and a couple of people gave me the side eye when I declined to shake hands. I guess everyone has forgotten the pandemic flu of 2009 when everyone was doing elbow bumps instead. CDC has raised their level of dialogue around coronavirus preparedness and HIMSS has followed suit by announcing it will be a handshake-free meeting. I anticipate some other behavior changes around whether people will accept samples of food or candy and whether people will even want to travel to such a large event. HIMSS notes that registrations are up over 2019 and the cancellation rate is below 0.05%.

Still, HIMSS has announced its preparedness plan, including collaboration with ED physicians, onsite support from the Florida Department of Health, onsite screening and isolation as needed, and more. They plan to have three medical offices at the convention center, with one of them dedicated to flu-like symptoms. There will also be an increased number of hand sanitation stations, increased wipe-down of commonly used surfaces, and the availability of medical-grade face masks at the information booths.

That’s more masks than I currently have at my office, which makes me sad. I’m a bit of a prepper already, so making sure I have enough personal supplies stocked in wasn’t a stretch, and I’ve warned my younger colleagues who rely on DoorDash and GrubHub for every meal that they might want to consider having at least a small ramen noodle supply at home. The next couple of weeks should be interesting. 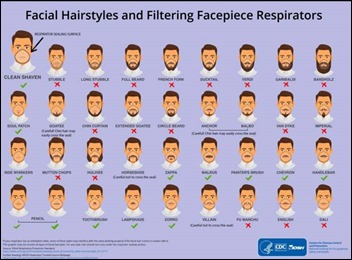 CDC is also circulating their infographic about the proper fit for high-end masks. I had no idea some of these facial hair styles even had names.

Anyone who has ever worked in hospital IT knows the fear that an upcoming visit from The Joint Commission strikes into the hearts of coworkers. There are many accrediting organizations out there, and often they are cited as the source of rules and regulations that don’t actually exist, leading to frustration for operational and technology teams alike. A recent report notes that CMS plans to strengthen oversight of accrediting organizations due to concerns about conflicts of interest. Some of the organizations provide both accreditation and consulting services which can be an issue, and CMS Administrator Seema Verma also called out accrediting organizations that use standards that are different from the CMS conditions of participation. The Joint Commission is one such organization that has created requirements above and beyond the CMS standards. 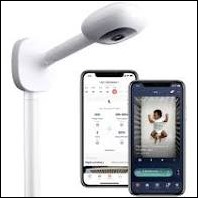 There are strong feelings out there about the way that technology is escalating the medicalization of things that were previously “normal” physiological process. From smart toilets that analyze stool patterns to diet and nutrition trackers, technology is everywhere. I’m part of an online group that mentors young mothers and nearly everyone either has or wishes they had a multi-hundred dollar smart bassinet to help their babies sleep better. A recent Washington Post article looked at the impact of AI baby monitors on nervous parents. It’s gone beyond the walkie-talkie style units of the past, with camera systems that transmit data to parents while they are away and also those that process the video to determine whether infants are in risky positions or getting tangled with blankets. Privacy advocates are concerned about the sharing of such private data and clinicians are worried that monitor companies are promising a level of safety that is not supported by research.

I’ve definitely noticed a heightened level of anxiety in the moms in my group, although I recognize that to some degree it might self-select anxious mothers since they’re participating in the group in the first place. Some of them are desperately trying to track and quantify every element of their babies’ existence, from feeding to diapers, sleep, and developmental milestones. I’ve seen mothers who have lost the ability to trust their instincts and are relying too much on data.

It’s similar to when physicians are in training and have to learn to “treat the patient, not the numbers.” The privacy issue is certainly a big one, with parents having no control over the images of their children once they’re transmitted to the vendor. Definitely food for thought.

Speaking of the quantified self, approximately a third of fitness trackers are abandoned after a while, winding up in nightstand drawers or the landfill. Recycle Health, affiliated with Tufts Medical School, has collected more than 5,000 wearables for redeployment to exercise and nutrition programs for low-income patients. Vendors have gotten into the act, with Fitbit, Fossil, and Withings sending excess inventory. Apple has not donated. In addition to individual donations, they also gather unclaimed lost devices from theme parks and tourist sites, which is a novel approach. Corporate wellness programs donate as well.

In other wellness news, recent research shows that odd-shaped parks may be better for public health. The authors used satellite imagery, cause of death statistics, and residence near a green space larger than 900 square feet as indicators. They found a decrease in deaths for every percentage point increase in green space. They found that irregular parks were beneficial because they might be more appealing to be in, or might be easier to stumble upon compared to formal parks with limited entrances. Complex-shaped parks were also linked to reduction in chronic health conditions. Recommendations for civic planners include finding ways to connect small or fragmented parks via greenways or other natural features. 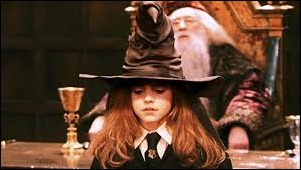 I always enjoy when a scholarly publication has a sense of humor, and a recent article in the Journal of Surgical Education did not disappoint. In “The Sorting Hat of Medicine: Why Hufflepuffs Wear Stethoscopes and Slytherins Carry Scalpels,” the authors surveyed surgical coordinator and residents to score various personality traits that tend to define medical specialties. There were more self-reported Slytherins in surgical subspecialties, particularly in orthopedic surgery. Family medicine had no Slytherins, which is not surprising. I don’t think students are going to start selecting their specialties based on their Hogwarts sympathies, but it was an amusing read.

Lots of chatter among the scribes in our office this week as the folks at Mayo Clinic Medical School mistakenly sent acceptance letters to 364 applicants. The school is blaming it on a technical glitch and said that as soon as they knew about it they withdrew the offers via email. Everyone affected has also been contacted by phone. The letters went to everyone who had interviewed, and there are typically only 46 actual spots available for students, with initial offers usually being made by phone.

The medical school admissions process isn’t something I would wish on anyone. It’s an emotional roller coaster and it’s expensive. Based on the fact that they were invited to interview, the applicants affected are generally qualified to attend, and I feel bad for them. 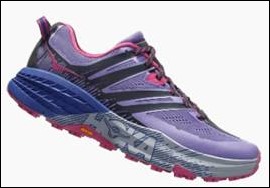 I got a chuckle out of reader Matt’s comment on my post about HIMSS shoes. He recommends HOKA, but notes that “they’re not inexpensive so you may have to add laser hair removal to your practice, add retail vitamin sales, or go into orthopedics.” You have to love a company that has a shoe named “Speedgoat” and their color combinations are certainly appealing.