VA Secretary Robert Wilkie fires his #2, Deputy Secretary James Byrne, due to “loss of confidence in Mr. Byrne’s ability to carry out his duties.”

Byrne was the VA’s highest-ranking official whose responsibilities included its Cerner implementation and other computer projects. He said in November that either he or Wilkie would make the decision of whether Cerner will be ready to go live at two pilot sites on March 28. Byrne expressed confidence in November that the scheduled go-live at Mann-Grandstaff VA Medical Center (WA) and Puget Sound Health System was on track.

Axios reports that the White House was not happy with the VA’s handling of a sexual assault complaint, leading Wilkie to ask for Byrne’s resignation.

The VA did not respond to press inquiries about who will take responsibility for its Cerner project.

Byrne is a United States Naval Academy graduate. He was deployed as a United States Marine infantry officer, served as a Department of Justice prosecutor, and was counsel to the OIG office that monitored the federal government’s $52 billion Iraq rebuilding program. He was the VA’s General Counsel for two years before being confirmed as VA deputy secretary in September 2019. He held that job for 20 weeks before being fired Monday.

From Ghost in the Machine: “Re: Cerner in Europe. Millennium is being pulled from Spain, Portugal, and France. They are also trying to find a buyer for the Siemens product in Spain and Portugal. That leaves no product to sell, so no need for sales teams and eventually everyone else. It’s not GDPR driving these actions, it’s nearly non-existent margins.” Unverified. UPDATE: CompuGroup Medical announced Wednesday morning that it has acquired several Cerner applications that are marketed in Germany and Spain — Medico, Soarian Integrated Care, Selene, and Soarian Health Archive, for which CGM paid $250 million.

From NFL Fan: “Re: Kansas City. Congratulations to Cerner and the other HIT vendors there on the Super Bowl win!” I’m glad that elitists who see the Midwest as faceless flyover country — including many who don’t know or care that two adjacent states confusingly have their own respective Kansas City – might have learned something (beyond lip synching shamelessly while booty shaking admirably) in watching the drought-breaking Chiefs win. KC area schools have cancelled Wednesday’s classes to allow customers to proudly cheer their taxpayer-supported entertainment vendor and its 20-something-year-old, possibly concussed employees who didn’t voluntarily choose to live there, so try not to whack someone while doing that questionably sensitive tomahawk chop thing. For me, I would avoid the adulatory, freezing parade masses and instead have some Jack Stack brisket and burnt ends with a Boulevard beer. Several health IT companies make the Kansas City area their home, with some of them off the top of my head being Cerner, Netsmart, and WellSky. 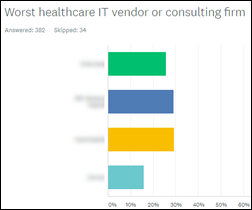 I emailed the HISsies ballots yesterday to HIStalk update subscribers. Voting is tied to those individual email addresses, so non-subscribers can’t vote (to prevent ballot box stuffing). The nominees came from reader submissions, so blame yourself if you don’t like the choices but didn’t bother to nominate your own. Voting so far has yielded few surprises despite heavy voting action in the “worst vendor” category. 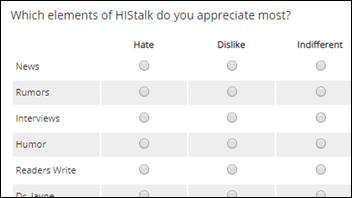 Speaking of voting, please take a couple of minutes to fill out my annual reader survey. I sit in an empty room filling up an empty computer screen every day, so this is my one chance each year to see who’s out there and how I can do a better job of meeting your needs. I always get a lot of good ideas from reader responses. I’ll sweeten the pot by doing one or more random drawings for a $50 Amazon gift card. 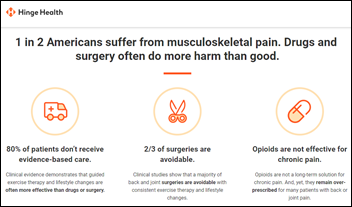 Hinge Health raises $90 million in a Series C funding round, increasing its total to $126 million. The company styles itself as “the world’s most patient-centered digital hospital” in the form of wearables, personalized exercise plans, and health coaching for back and joint pain, paid for by employers.

I care even less about McKesson now than when they were a crappy HIT vendor who bailed out, but just in case you still own shares, the company reports Q3 results: revenue up 5.3%, adjusted EPS $3.81 vs. $3.40, beating earnings expectations. 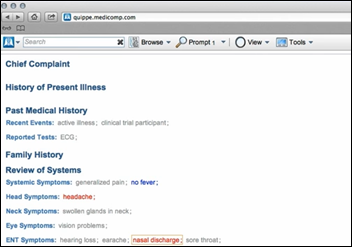 Medicomp Systems and Emtelligent will partner to develop clinician workflow and usability solutions based on Medicomp’s Quippe clinical data engine and Emtelligent’s medical natural language processing engine. The first co-developed solution is in beta testing and will be released this quarter. 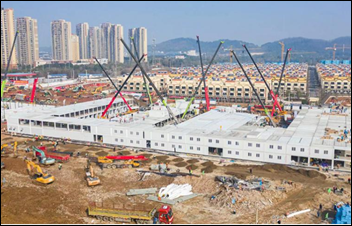 China admits the first patients to its 1,000-bed coronavirus hospital that was built in 10 days by a crew of 7,000 workers in Wuhan. A second 1,500-bed hospital will open this week. Clinicians will connect to a Beijing hospital using a video system that was installed in less than 12 hours, while medical robots will transport drugs and specimens.

Interesting: Memorial Sloan Kettering Cancer Center has hired a new CIO with no healthcare experience (Atefeh Riazi, who held that role with the United Nations) who will report to the chief digital officer it hired in November 2019 (Claus Torp Jensen, who came from CVS Health and Aetna). Former VP/CIO Pat Skarulis has apparently retired. MSKCC’s federal tax forms show that Skarulis was one of the higher-paid CIOs among non-profit health systems at $1.4 million, joining at least a dozen of her MSKCC peers in the million-dollar club. I also note from that tax form (from the 2017 tax year) that former IBM CEOs Ginni Rometty and Louis Gerstner both sit on MSKCC’s board and IBM was one of its top five contractors at $4.9 million. 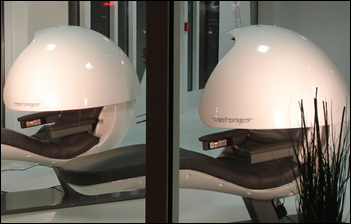 In England, NHS hospitals are installing “sleep pods” to allow doctors and nurses to take short naps during their shifts, with an average stay of 17-24 minutes. American company MetroNaps makes the pods, which include soothing music, lights, and vibrations. Sleep medicine experts say it’s unreasonable that air traffic controllers are required to take a 30-minute break every two hours to avoid mistakes, but NHS caregivers rarely get time to recharge.