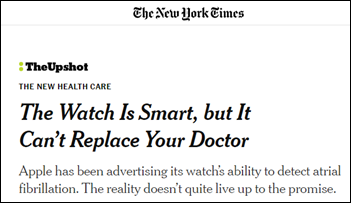 An atrial fibrillation detection study of 420,000 Apple Watch users finds that just over 2,000 of them received irregular pulse warnings, but only 450 followed up with the offer of a free telemedicine visit and verification via an EKG sensor patch. Of those 450, atrial fibrillation was confirmed in 153, with the actual outcome and health benefit to the population as a whole remaining unknown.

The physician author of the New York Times article concludes, “While there may be reasons to own an Apple Watch, using it as a widespread screen for atrial fibrillation probably isn’t one.”

From Juneau Boy: “Re: CoverMyMeds. Hacked, maybe? Their prior authorization system gives users a warning that their computer has been compromised and they need to call a telephone number to get it resolved.” Unverified. I don’t know how their system is accessed, but if it’s via browser, it may be the user’s computer that has been compromised and not theirs since malware-produced scammer pop-ups are common.

From OptumOrange: “Re: Optum. Laid off many in behavioral health on 12/23. Merry Christmas.” Unverified, but widely reported on TheLayoff.com and not too shocking given that the healthcare-milking company has 175,000 employees who are collectively insignificant compared to investors. Another round of layoffs is rumored to be on the books for January 3. The warning signs from my experience (other than working for a huge, publicly traded company, which is the most relevant layoff tell of all) are: (a) managers start disappearing for lengthy meetings, possibly offsite, to prevent leaks; (b) their assistants look dejected because they have to do the dismissal paperwork and deploy security guards and boxes of tissue to the impromptu departure lounge from which their colleagues will be forcefully bidden adieu; and (c) the managers stop looking employees in the eye, especially the ones they have chosen for the executioner, because even the microscopic, situationally malleable conscience of managers feels a tiny bit of shame at being involved in the door-showing of people who got them where they are.

I hope you had a memorable Christmas, whether you specifically celebrated that holiday or not. It’s always interesting to see how infrequently-seen relatives handle family get-togethers – the inevitable personal drama and political arguments, toddlers and some adults who are too preoccupied by shiny objects like toys and phones to interact socially, and the important ritual of telling family stories and collectively rekindling memories for the next generations. It’s also a time of despair for those who can’t be with family, those whose life circumstances present few reasons to celebrate, and those who actually believe the self-stroking fiction people post on Facebook and conclude that their less-photogenic lives must indicate some degree of personal failure in falling short of Hallmark Channel expectations. In any case, the National Suicide Prevention Hotline is 800.273.8255. We all struggle, just differently.

Here’s why you shouldn’t trust Amazon reviews for products made by companies you’ve never heard of, most of them being in China. I bought a junky flash drive that was DOA and immediately returned it to Amazon in a great customer service moment (fast and easy). When it first arrived, the company offered a second drive for free if I would post a positive Amazon review, but instead I wrote an appropriately scathing one. This week, the company offered me a $50 Amazon gift card to take the review down (which of course I did not). I immoderately love most things Amazon and Prime, but even I’m getting fed up with its lack of control over third-party sellers, counterfeit products, and the artful gaming of its review system to scam Amazon customers. Mark my words – Amazon will be the next EBay if it can’t protect one set of customers (consumers) from the other set (the third-party sellers that contributed $43 billion in Amazon revenue in 2018).

I received lots of nice emails, even several on Christmas Day, from teachers whose Donors Choose projects were fully funded by donations from HIStalk readers and my Anonymous Vendor Executive (AVE). Ms. M said the Chromebook we provided to her class is a “true blessing” since she can’t afford to buy one for her class given her $46,000 salary after 20 years of teaching. Anyway, AVE has replenished the matching funds that reader donations thankfully depleted, so we’re back on for funding more projects.

I’m pondering the past tense of “intake,” as in the “patient intake process.” When it’s over, have they been intaken, intaked, or intook? It’s a fair question when people start using made-up words and phrases, sort of like “executive producer” that begat the awkward “executive produced.” It’s also not the best reflection of the noble nature of healing the sick to impersonalize the process as “patient intake” like they are birds being sucked into a jet engine.

Listening: Shudder to Think, a long-defunct DC indie hardcore band whose album was tracking in the vinyl store / bar I was in today as I was looking over an album by Lothar and the Hand People, which I would bet nobody in the place ever heard of except me.

Scientific American says the rush of artificial intelligence systems into patient care has significant potential, but those systems are overhyped, they are often created by technology companies whose rush to market may endanger patients, they sometime deliver illogical results after being trained on illogical data, and companies haven’t proven their effectiveness via peer-reviewed journal articles. An industry expert says AI developers aren’t interested in spending the time and money on clinical trials, noting that, “It’s not the main concern of these firms to submit themselves to rigorous evaluation that would be published in a peer-reviewed journal. That’s not how the US economy works.”

An outcomes expert questions a study claiming that Livongo for Diabetes reduced medical spending by 22%, noting:

The Pentagon urges service members ignore their 23andMe and Ancestry Christmas gifts, warning that sending off their DNA samples could compromise security and place their military career at risk if their information is exposed and suggests risks to military readiness. They also note that the tests are unreliable anyway.

A Kaiser Health News article says EHRs are creating a “new era” of healthcare fraud, but it’s all over the place, trying to connect the dots from previous new stories, some of them involving accusations that haven’t yet been proven:

A fascinating set of tweets addresses the admirable American phenomenon of “aging in place” that conflicts with our suburban sprawl of cul-de-sac neighborhoods where public transportation can’t effectively reach. The result: aging people remain in their homes but are unable to drive, so they assume their transportation needs will be met by unpaid family and caregivers, but the reality is that they rarely leave. I suppose ridesharing services are the answer for those seniors who are comfortable using smartphone apps and who can afford the fare. 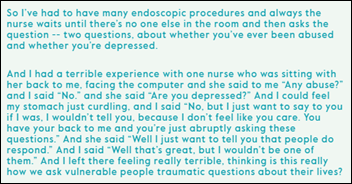 Penn Medicine Listening Lab invites people to share their stories about experiencing real communication as a form of care during their illness. One submission was from a doctor who noticed that his new patient was clutching a large envelope, and when he looked up from EHR data entry long enough to ask about it, the man explained that his son had died of cancer at 32 and “he was looking for a chance to tell his son’s story before he told his own.” That reminded me of project my health system ran years ago in which employees were coached to go beyond the rote performance of their duties to ask patients, “Can I help you with anything else? I have the time.” The “I have the time” part is the secret sauce, because we healthcare people are always rushing around in front of our current patient / widget. Our IT field support techs had already learned this – they knew that once they went out to a nursing station to work on a printer or something, they could make themselves and the rest of us heroes by simply looking up from the paper jam to ask the folks around them how it was going. It was initially surprising how many problems our clinical employees asked them for help with email, browsers, Wi-Fi, etc. and we could have fixed them easily had they opened a support ticket. We got even smarter and started rotating our support center people out on the floors, which dramatically increased empathy on both sides of the IT fence. 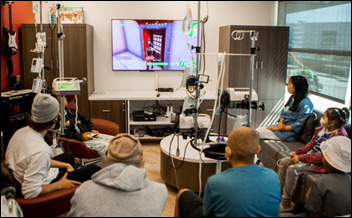 Charities, including hospitals, are fundraising by running telethon-like pitches to the live streams of online gamers and other streamers. St. Jude’s Children’s Research Hospital has raised $20 million from 20,000 participants since 2014, while Children’s Miracle Network Hospitals has taken in $70 million.