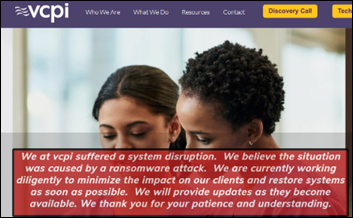 The hacker is demanding $14 million to provide the encryption key, which the company says it can’t afford.

VCPI says some of its client facilities may be forced to shut down due to their inability to order drugs, generate bills, and pay employees. 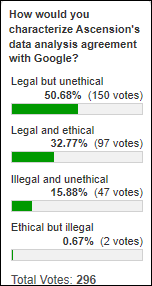 Over 80% of poll respondents think that Ascension’s data analysis agreement with Google is legal, but two-thirds also think the relationship is unethical.

New poll to your right or here: Have you ever been laid off or otherwise lost a job other than for performance issues? Click the poll’s Comments link after voting to share your experience.

I regularly worry that my 2.5-year-old, inexpensive Acer laptop will fail and leave me without a backup other than my Chromebook, which works great but doesn’t run some niche Windows apps that I need. I’ve been watching for a deal on something similar and saw a pre-Black Friday offer on an HP Pavilion 15z with AMD Ryzen 5, 16 GB of memory, 256 GB SSD storage, and a 15.6” touch display. I wanted 16 GB (which isn’t as common or cheap as it was a couple of years ago for some reason) and SSD since I’ve become spoiled by both, so my $480 order is in. I’ll report back after it arrives early next month.

Google’s venture fund provides $4 million in seed funding to Rad AI, a radiology workflow optimization software company that was started in 2018 by a radiologist who entered medical school at 16 and now practices in North Carolina. 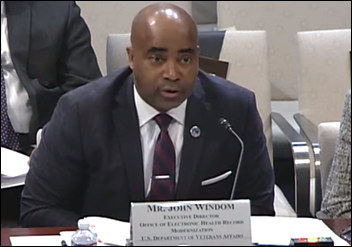 The VA says that it hasn’t worked out jurisdictional issues with the Department of Defense over patient information that will be stored in their respective Cerner systems, admitting that nobody really thought about data sharing issues when the projects were conceived. Existing laws may require veterans to make separate requests to the VA and DoD to obtain their health records despite the goal of a single record for each patient. The VA also acknowledges that its March go-live at Mann-Grandstaff VA Medical Center (WA) will involve a limited implementation that will require employees to toggle between Cerner and VistA.

Medical researchers observe that European Union’s General Data Protection Regulation has caused problems for their studies that cross national borders outside the EU. NIH Director Francis Collins says his study of diabetics in Finland ground to a halt when NIH could not meet the privacy requirements of its national equivalent in Finland. Neither the US nor Canada are recognized by the European Union as providing adequate data protection, so researchers must sign contracts to accept Europe-based audits or to cede legal jurisdiction to the originating country’s courts. GDPR isn’t an issue when patient information is anonymized, but countries haven’t agreed on how that anonymization can be performed and some studies include sample data that cannot be stripped of identifying characteristics.

Bloomberg notes that Inovalon Chairman and CEO Keith Dunleavy, MD is a billionaire once again following a 60% run-up in the analytics platform vendor’s stock price in the past year. Timing is everything, though — the company went public in early 2015 at $27 per share and is down 36% since, while the Nasdaq rose 74% in the same period.

Allscripts defends its work on an $18 million software implementation in the Bahamas that has resulted in no applications live after three years and $8 million in payments. The company responded to a newspaper’s request for comment that it is in full compliance with the contract and is waiting on approval from the government, which says it is looking for a replacement system. Allscripts misidentified its client in the response as the “Public Housing Authority” rather than the “Public Hospitals Authority.”

Medical residents in South Korea complain that while their weekly work hours are newly capped at 80, they are seeing more patients without much help from specialists in learning new procedures. They also claim that hospitals shut off after-hours EHR access to make it look like they are complying with the hours cap, but give them other work to perform instead.

In Australia, a government review of misused private data looks at Queensland Health’s Cerner IEMR, which allows employees and staff at any of its 14 hospitals to view the records of all patients. The government worries that the hospitals don’t fully understand how to configure the system’s privacy controls, such as flagging high-profile records to warn users that any inappropriate access will be investigated. However, one hospital’s HR director says its P2Sentinel access monitoring system issues reports that aren’t that useful, leading to a huge backlog of potential inappropriate viewing incidents that the hospital doesn’t have time to investigate.

Two Colorado state agencies announce that a bug in their tracking system allowed several batches of contaminated medical and recreational marijuana to be sold, triggering a recall of such products as Ghost Cake Killah and Grape Ape.