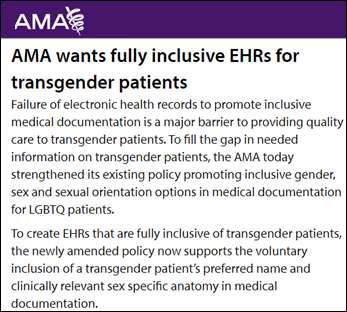 The American Medical Association adopts a policy that calls for EHRs to be able to collect the preferred name and clinically relevant, sex-specific anatomy of transgender patients.

From Creative Juice: “Re: being laid off. I’m thinking about suing. Advice?” Don’t bother. Allow me to list the steps you’ll go through after being laid off, ending with the distant speck of light at the end of the unemployment tunnel:

From Oingo Bongo: “Re: Allscripts. Heard from a contact that there’s been another round of Paragon staff. Got any info on that?” The company laid people off last week, and while I haven’t heard anything specifically regarding Paragon, I can’t imagine that’s a growth area. Also relevantly not growing is MDRX share price, down 12% in the past year vs. the Nasdaq’s 22% gain.

Reader AC made a great suggestion to turn on two-factor authentication for Gmail and other important services that don’t enable it by default, following my story about a hospital employee stealing co-worker logins using a keylogger program. I did it and it was painless. Gmail prompted me to enter a one-time verification code that it sent via SMS message, which it does each time I log in from a new device. Once I did that, it’s business as usual with no further verification unless I (or someone else) logs in from a different device. That means a hacker who has obtained my login credentials still can’t hijack my email account. An extra feature – you can ask Gmail to generate a bank of one-time codes to use when you won’t have your phone. Thanks for that advice. I can’t even imagine the headache and security exposure that would be involved with someone gaining full access to my email account, including all the personal and confidential information it contains.

Listening: the first, eponymous album by The Doors from 1967’s Summer of Love. “The Crystal Ship” alone is worth the ride. Mr. Mojo Risin’ had just turned 23 when the album came out, the beginning of his four-year term as the country’s most dangerous and reckless poet, musician, and performance artist until the unfortunate intersection of drugs and bathwater sent him to “The End” (as it did Whitney Houston and Dolores O’Riordan of the Cranberries). I’m also enjoying new from singer-songwriter JP Saxe, who I think is probably going to be pretty big.

Virtusa will add EHR data to its VLife life sciences platform from the InterSystems IRIS for Health interoperability solution .

National Veterinary Associates, which owns 700 veterinary hospitals and boarding facilities, is struggling to recover from an October 27 ransomware attack that affected 400 of its locations. The company declined to answer questions about the malware or whether it paid a ransom.

American healthcare in a nutshell: the manufacturers of heart stents assure their investors that a widely praised study that proved the less-than-expected value of such procedures won’t hurt their business much. Translation: hospitals, doctors, and device manufacturers aren’t about to let medical evidence get in the way of their profits, meaning your odds of being stented won’t change just because we now know that it doesn’t work any better than a prescription. Meanwhile, a cardiologist whose research helped develop a new drug for a rare type of heart failure criticizes the manufacturer for setting the price of the capsule at $225,000 per year versus the estimated cost-effective price of $17,000.

A Bahamas senator says he “makes no apologies” for his involvement with the 2016 signing of an $18 million contract with Allscripts and Infor that was supposed to transform healthcare there, even through the Public Hospital Authority warned Allscripts in late 2018 that it wasn’t happy that the company hadn’t installed any software anywhere despite having been paid $7 million. The local newspaper speculates that the government will give Allscripts a 60-day cure notice, then terminate the contract with expectation of a full refund. The government blames Allscripts in “a glaring lack of oversight” for “a staggering increase in implementation costs” beyond agreed-on amounts, with consulting firm Avaap billing the government $1.5 million. The paper also notes that the Allscripts proposal was stamped as received 11 days after the tender’s closing, which had already been extended by 14 days. The country’s minister of health declares the project “a bust.” 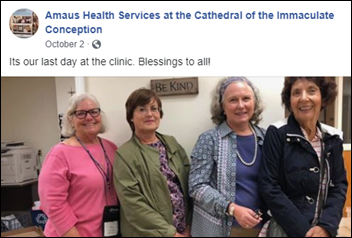 A free clinic in Syracuse, NY closes after 12 years when the part-time founding doctor found that she was spending more time maintaining its EHR than seeing patients.