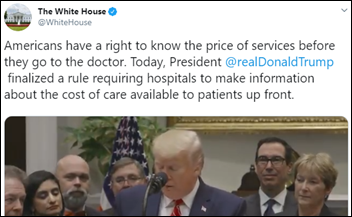 HHS, as promised, expands its previous plan to require hospitals to publicly post all of their payer-negotiated charges by also requiring insurers to do the same.

Hospitals would also be required to post the cash payment they are willing to accept for 300 common, shoppable services.

First, we are finalizing a rule that will compel hospitals to publish prices publicly online for everyone to see and to compare. So you’re able to go online and compare all of the hospitals and the doctors and the prices, and, I assume, get résumés on doctors and see who you like. And the good doctors — like, I assume these two guys are fantastic doctors, otherwise you wouldn’t be here. (Laughter.) And the bad doctors, I guess they have to go and hide someplace. I don’t know. Maybe they don’t do so well, I don’t know. But if they’re not good, we — we are more interested in the good ones. It’s called rewarding talent.

Second, we’re putting forward a proposed rule to require health insurance providers to disclose their pricing information to consumers. We’re giving American families control of their healthcare decisions. And the freedom to choose that care is right before them on the Internet and elsewhere, but on the Internet. Very, very open. Very transparent. That’s why it’s called transparency. 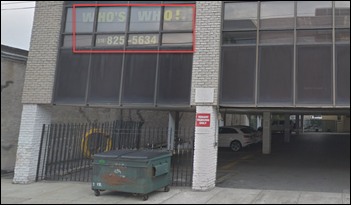 From Who Diss?: “Re: Who’s Who. This CIO was recognized as a ‘Top Medical Professional’ by a seedy-looking organization’s press release.” A variety of “who’s who” scammers contact people cold, preying on their vanity by advising them that they have been “chosen” by their admiring peers or the company’s editor to be included as a member in a paid online listing. After that, they are hit with the upsell to buy lifetime memberships or vanity crap like wall plaques and hardcopy books. You CIOs, pharmacists, doctors, and nurses who I see listed on this particular one’s site got taken, I’m sorry to tell you. Please don’t list this laughable accomplishment on your resume, which in some LinkedIn examples shares space with bogus educational credentials. Above is the company’s luxurious office suite in Valley Stream, NY, conveniently located above the dumpster in which visitors can pitch their “award” and possibly their careers right out the window.

From Gobsmacked Compliance Professional: “Re: SCL Health and Providence. I was having dinner adjacent to a restaurant’s ‘private’ dining room and was gobsmacked to overhear a detailed discussion about their plan to merge, including proposed timeline, financials, etc. Annual reports are due in December and will be interesting reading.” Unverified. SCL owns eight hospitals in Colorado, Kansas, and Montana that generate $2.5 billion in annual revenue. Providence operates 51 hospitals with annual revenue in the $23 billion range. Maybe this alleged privacy slip is yet another example of hospital people loudly saying things they shouldn’t within earshot of others.

From Register Ringing: “Re: HIMSS20. Look at this page of well over 1,000 things they’re trying to sell to exhibitors.” Vendors can whip out their checkbook to buy nearly every square inch of the convention center or to have HIMSS push their sales message to attendees, including: 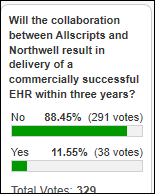 New poll to your right or here: How would you characterize Ascension’s data analysis agreement with Google? Click the poll’s Comments link after voting to explain.

The FBI arrests a former IT employee of an unnamed New York City hospital, charging him with installing a keylogger program on dozens of employee PCs to capture their email login credentials so he could steal their photos and tax records. I was thinking that this sort of information shouldn’t have been stored on a work PC in the first place, but then realized that he probably grabbed their logins to Gmail or other web-based personal email services.

The Washington Post covers “rural America’s busiest emergency room,” Avera Health’s telemedicine center in South Dakota that provides remote ED service for 15,000 emergencies each year covering 179 hospitals in 30 states “where the choice is increasingly to have a doctor on screen or no doctor at all.” Rural ED visits have increased 60% in the past 10 years, but hospitals are closing, doctors aren’t willing to move to small towns, and standalone EDs are going broke. One small hospital signed up at a cost of $70,000 per year after it received four critical automobile accident victims with just an single RN working, with no doctors available within an hour’s drive. Fun fact – the virtual service’s doctors wear scrubs and lab coats to their suburban office park location so they will look like real doctors to their TV patients. The virtual ED clinicians must work patiently with local nurses who may have no experience with intubating patients or who need help running a code blue. Avera ECare’s telemedicine network also offers services for ICU, school health, pharmacy, clinics, behavioral health, correctional health, and hospitalist coverage. 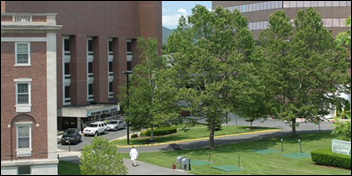 The Pittsfield, MA paper covers the $35 million implementation of Meditech Expanse by Berkshire Health Systems. The article focuses on the hospital’s problems with the Allscripts FollowMyHealth patient portal – the inability to share data, uncertainty over how the company might use its data for marketing, low usage in the 30-40% range, and patients who either can’t sign on to FollowMyHealth or who sign up directly with the service instead of through the hospital-provided link. The health system is a longstanding Meditech customer for inpatient and is apparently replacing Allscripts ambulatory with Meditech. 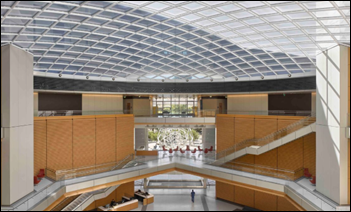 The Wall Street Journal profiles the technology underpinnings of the new $2.1 billion, 368-bed Stanford Hospital that opened this weekend. It was originally scheduled to be open in early 2018, but was delayed because Apple’s spaceship headquarters project sucked up all the Silicon Valley steelworkers. I was curious about Stanford’s financials, which show $4 billion in annual revenue, a profit of nearly $450 million, several executives in the $1-2 million range, and not-unreasonable IT compensation (the CMIO was paid $770K, while the CIO made $500K). Hospital features include: 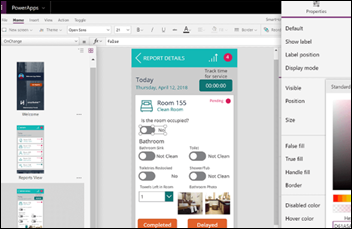 CIOs are expanding their use of “low-code” drag-and-drop automation tools such as Microsoft PowerApps to quickly create applications that automate business processes, which Gartner says will make up 65% of application development in the next five years. St. Luke’s University Health Network (PA) VP/CIO Chad Brisendine says his team has built 20 applications – none of which took more than 20 hours to create – to extract information from hospital systems. A non-programmer needed just eight hours to develop an app that extracts information from its Workday HR system to issue CME reminders to doctors. A Microsoft case study describes how Northwell Health used Dynamics 365 (and its Healthcare Accelerator) and PowerApps to develop a daily rounding app. I admit that the geek in me is aroused. 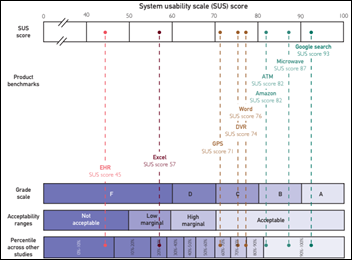 Several readers forwarded the full text of a just-published article that tried to correlate physician-perceived EHR usability with burnout, with the big conclusion being that EHRs “received a grade of F by physician users.” My critique: