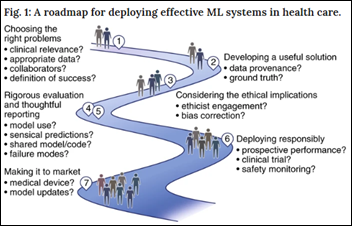 Nature magazine has run some good healthcare related articles lately (they are always called to my attention via tweets from Eric Topol). A new perspective piece covers the responsible use of machine learning in healthcare, containing many points that are likely new to the healthcare-inexperienced technologists who might be searching for any protruding nail for their proudly-created hammer:

From Mo Exposure CEO: “Re: links. Thanks for linking to our company’s news item. The response from HIStalk readers was amazing.” Thanks for deciding to sponsor the site as a result, especially since I don’t run fluff news pieces, meaning your announcement had to earn its way into my news post. Items I mention sometimes get a lot of clicks. Even webinar announcements sometimes get a couple of thousand clicks, and announcing a new sponsor always draws several hundred. Sponsor support comes from having loyal, influential readers, so my only job and outcomes measure is to make it worth their while to return.

From She Lives on Love Street: “Re: [RCM business line omitted.] Word on the street is that it’s been sold to [acquirer name omitted].” I’ve emailed the rumored acquirer’s PR contract but haven’t heard back. I’m running the redacted version to remind myself to follow up.

From Core Cutter: “Re: Apple. This CNBC article suggests internal trouble with its health offerings.” Reporter Chrissy Farr sometimes writes good health IT-related stories, but this isn’t one of them. I suspect her editors are pushing her too hard into drumming up questionably researched, speculation-based stories that hold minimal news value, as in her never-ending quest to take guesses at “what Amazon is doing in healthcare” because naming those big names draws eyeballs, but leave their owners with little useful information. This one tries to extrapolate Apple’s health-related departures into “differing visions for the future” that aren’t backed up by the stated facts. My take: 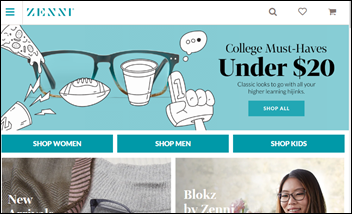 I Google-discovered Zenni in helping a friend get eyeglasses and it’s pretty cool. You key in the vision numbers from your eye doctor’s prescription (they don’t want the actual prescription), use a ruler to measure the distance between your pupils, and then head off through a long list of frames to choose your glasses. It takes a couple of weeks to received them in the mail from China and then you’re set unless you need to bend them a bit like your optician does for a perfect fit (not necessary in his case). The biggest draw beyond convenience is price – a pair of snazzy progressive glasses cost him less than $50 (they look exactly like his $300+ pair from Costco), single-vision sports glasses with polarized lenses were $60, and no-nonsense single-vision sunglasses were $15 (!!). At these prices, you could stash a pair of prescription sunglasses in every car, get some glasses set for computer monitor distance, and get backup normal glasses for next to nothing.  What you end up with is pretty much exactly what the optician would sell you for five times the price after two trips to the store. You still need an eye exam every year or two, but what happens afterward is Zenni’s strong suit. You could do a life-changing but inexpensive good deed by treating someone who can’t afford glasses to a pair of Zennis.

Color me skeptical: a new Frost & Sullivan white paper (which you can download only if you provide work details) predicts that clinical decision support systems “are poised to become the user interface of choice for clinical interaction with health IT,” replacing the EHR. My take is exactly opposite – clinical decision support systems will feed their information and recommendations through the EHR, disappearing in the background but providing no less of a service in recognizing that clinicians rightfully want everything placed into their EHR workflow and design. Nobody in their right mind would suggest that CDSS systems contain everything a clinician needs to see, or to visualize how those systems would interact with the user when several are in use (one for radiology image appropriateness, one for antibiotic stewardship, etc.) I think F&S is way off base here, and had I cared enough to download the report, I bet I would find some CDSS vendor involvement. The HIMSS rag gave it a dramatic headline, a pointless stock art photo, and a non-critical acceptance of what the report’s author said, assuming they paraphrased it accurately. This is one of those reports that predicts huge growth in some market segment, knowing that a more realistic report wouldn’t exactly fly off the shelf. 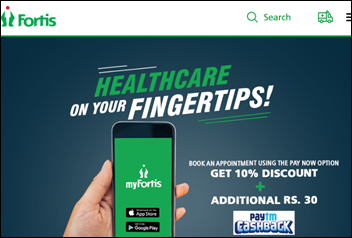 The newly hired, cost-cutting CEO of India’s second-largest hospital chain will slash its expenses by 20% in trying to recover from the misappropriation of company funds by its previous owners. Publicly traded Fortis Healthcare will reduce doctor pay, replace people with software, close underperforming hospitals, sell non-essential assets, and ensure that nurses perform only those tasks that lower-paid employees can’t do. 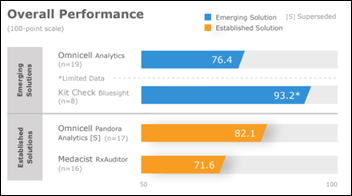 A KLAS review of drug diversion monitoring technology finds that Omnicell Analytics is the most widely adopted solution, but many customers fail to achieve their expected outcomes because they decline to pay the extra cost of EHR integration.Medacist RxAuditor has a lot of customers, but outdated technology and workflows cause most of them to use only its simplest dispensing reports in then chasing down problems via manual workflows. Kit Check’s Bluesight for Controlled Substances holds promise based on early adopter reports.

The URL of Sonoma Valley Hospital (CA) is “maliciously acquired,” forcing the hospital to change its prized three-letter domain name of “svh.com” to “sonomavalleyhospital.org.” The hospital’s URL registration was good through late 2021, but someone updated it using credentials from an unknown source to take control, which an expert contacted by the local paper says is nearly impossible to reverse. I checked the Whois for the URL and it’s now running on China-based servers with “registrar lock” turned on. I thought it was straightforward to contact the web registrar or ICANN with proof of ownership to get the transfer reversed, but regardless, hospitals should:

A fired VA hospital chief pathologist is charged with three counts of involuntary manslaughter after a review of his needle biopsy cases showed a misdiagnosis rate of 10%, 10 times the expected rate. The VA says he was responsible for at least 15 deaths and an unknown number of incorrect diagnoses. Colleagues had complained of his erratic behavior for years, but the VA let him continue working while he underwent drug and alcohol rehab, finally firing him in 2018 after a DUI arrest. 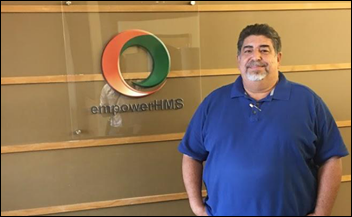 Kaiser Health News covers the plight of several “no-stoplight” rural towns that believed Miami entrepreneur Jorge Perez, who promised to save their tiny local hospitals but instead used them in a massive insurance fraud scheme that took advantage of higher lab billing rates for rural hospitals. A 14-bed hospital cranked out bills for $120 million in just six months, of which $80 million went to the hospital’s new owner and little to the hospital, as employees reported running out food, cleaning supplies, and IV fluids, with patients in one of them displaced because their hospital beds were repossessed while they were still occupying them. When insurers eventually stopped paying, 12 of the hospitals filed bankruptcy and eight closed. Perez paid $3.5 million to settle the the DoJ’s false claims charges and says he’ll now focus on his software businesses.