It’s that time of year when CMS releases updates to ICD-10 codes for the coming fiscal year. The files are now available and go into effect starting October 1. For those of you used to receiving a General Equivalence Mapping update along with your new codes, you’re out of luck. CMS previously announced that they would only update the GEMs files for three years after the implementation of ICD-10. It’s hard to believe it’s been that long since we kissed ICD-9 goodbye. I wonder how many clinicians are hoping they’ll be long-retired before ICD-11 comes around? Most World Health Organization member states are slated to start using it in 2022, but I’m betting it will be a long time before it makes it to the US.

Kaiser Health News reports some interesting data from the Food and Drug Administration database containing medical device malfunctions and injuries. Manufacturers sent data to this “hidden” database via Alternative Summary Reports rather than to the public FDA database used by researchers and patients. Top tidbits include: blood glucose meters had more incident reports (2.4 million) than any other device, with the majority of them being manufactured by a former subsidiary of Johnson & Johnson; dental implants comprised 2.1 million reports; 176 deaths were reported through the non-public workflow, including those related to insulin pumps, pacemakers, and ventilators; surgical stapler malfunctions numbered 66,000 in the hidden database vs. 84 in the public database; and breast implants accounted for nearly half a million reports. Despite the visibility of this issue, the FDA has replaced the alternative “hidden” reporting process with a new Voluntary Summary Reporting Program that may be just as hard to track as the previous Alternative Summary reports.

In the Virtual Assistant arms race, CNBC reports that Google Assistant does a better job than Alexa or Siri in helping patients with medications, although studies still indicate that voice assistants aren’t ready for prime time where health or medical data is at stake. The study looked at queries regarding the 50 most commonly prescribed medications and whether users received accurate information when asking a device to “Tell me about” a particular drug. Google Assistant identified 92% of brand name drugs and 84% of generics, with Siri scoring 58% and 51%, respectively. Alexa trailed at 55% and 46%.

It’s time to cut the cat videos. Nearly all of us have fallen down the rabbit hole that is YouTube and found ourselves minutes (or hours) later having watched video after video. (My personal favorite begins with the “Nope Ropes, Sneks, & Danger Noodles” offering  from Lucidchart and devolves from there.) New data shows that the number of people spending two hours a day or more watching TV or videos is high – 62% of children, 59% of teens, 59% of non-retired adults, and 84% of seniors. This inactivity places us at risk for obesity, chronic disease, and overall mortality. I made a pact with myself to only watch Netflix while I’m on the treadmill, so thanks to “Halt and Catch Fire” for helping me meet this month’s fitness goals. 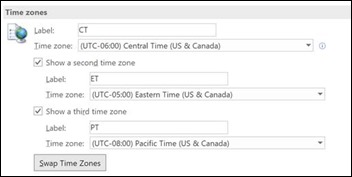 I literally could not contain my excitement when I stumbled across this option in Office 365 that allows me to display a third time zone. I’ve been wishing for that enhancement for a long time and it will make my life so much easier. Not that I don’t know how to figure out time zones, but it’s a nice check and balance to be able to confirm it on the screen. We’ve all been the victim of wrong time zone meetings and I certainly don’t want to be a perpetrator. Now if they could just come up with a calendar widget for scheduling recurring meetings on different days of the week (a la GroupWise circa 2011) my scheduling desires would be complete.

A recent Journal of the American Medical Association article introduces the concept of a TACo, or Targeted Automatic e-Consultation. The TACo aims to bridge the gap between traditional sub-specialist consultations, which are time-consuming, and so-called “curbside” or informal consultations. Traditional consults are problematic because they require analysis of the chart, examination of the patient, and detailed documentation; subspecialists who are in short supply at some facilities can run themselves ragged trying to complete all their consultations. Curbsides are informal and might be limited by the information available along with lack of an examination; usually the recommendations aren’t documented in the chart because there isn’t a physician-patient relationship. Unlike other consultations which require a physician or care team member to initiate the consult, the TACo would be automatically triggered by certain laboratory or examination findings as they are documented in the chart. The receiving subspecialist would have access to a “customized view of the pertinent information” for virtual review and could then suggest focused advice, a formal consultation, or neither.

The approach is under evaluation by the diabetes service at the University of California San Francisco. The EHR identifies patients meeting certain criteria and presents key chart elements to the diabetes sub-specialist. Management suggestions are documented and most reviews take less than five minutes. The team published data showing improvement in diabetes management through reduction in both high and low glucose events. The outcomes have allowed the organization to provide continued funding to support the time spent in review by the subspecialists. They plan to expand the TACo concept to other services including hematology, metabolic diseases, and infectious diseases with an eye to common conditions that may be managed incorrectly and can be triggered by objective data mined from the EHR. The authors note that “if TACos prove to be beneficial, a convincing argument could be made for payers to reimburse them, just as care coordination and telemedicine ultimately became eligible for reimbursement.” Even if they were billable, organizations would still need to expend resources in managing the technology required to support the approach.

Is your organization considering something along the lines of a TACo, or is it just lunch food? Leave a comment or email me.