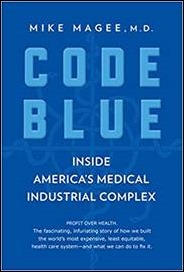 I’m an avid reader and was very excited to hear about “Code Blue” by Mike Magee. The author is a physician and chronicles decades of bad behavior by what he calls the “Medical Industrial Complex” of self-interested parties that drive our healthcare non-system.

Magee skewers physicians, hospitals, payers, pharmacies, drug makers, legislators, and other special interests. He notes that healthcare reform as been needed for decades, going back to a speech by President Nixon in 1972: “We need to work out a system that includes a greater emphasis on preventive care, sufficient public funding for health insurance for those who cannot afford it in the private sector, competition among both health care providers and health care insurance providers to keep down the costs of both, and decoupling the cost of health care from the cost of adding workers to the payroll.” It’s been a long time since we’ve seen a Republican call for greater public funding of health coverage for the poor.

Magee also calls out healthcare executives, physicians, and the American Medical Association. The worst criticism, however, is saved for pharmaceutical giants (it should be noted that Magee was a VP at Pfizer) who use profitability to determine which drugs will come to market. I highly recommend it, especially for newbies in the industry. It’s a steal at $16 on Amazon.

Road warriors take heart: London’s Heathrow Airport is installing new carry-on baggage scanners that can screen liquids and computers while they are still in your bags. Although some of us get a pass on the great unpacking routine in the US if we have TSA Pre-Check, perhaps this will clear the way to going back to a pre-2006 workflow at many more screening checkpoints. The story points out that it’s also an environmentally friendly option, helping cut plastic use since people won’t be using as many ziplocks. The technology, which is similar to CT scanners, has been in trials at Heathrow for two years and is also in use at several sites in the US, including ATL, ORD, and IAD although authorities still require us to pull out our baggies at those sites. I miss my road warrior ways, particularly since my airline status will likely sunset this year.

Speaking of road warriors, those of you on the clinical side might be interested in this Journal of the American Medical Association article on in-flight medical emergencies. I found it fascinating reading and learned a few things:

I’m a big fan of online medical journals, and this week I came across a JAMA Viewpoint piece explaining why we should consider eliminating or modifying the requirement for a Review of Systems (ROS) during patient visits. Although asking a variety of questions about body systems as part of the ROS has been part of the history-taking process for years, it became an annoyance a couple of decades ago when the number of systems reviewed was tied to the coding and billing process.

There hasn’t been much academic work looking at the validity of the ROS, although one study found that it only identified new diagnoses in 5% of cases. Other studies have noted that only a small percentage of issues identified during the ROS are even addressed.

The authors of the viewpoint article took into account that EHRs make the entry of ROS findings easy, especially if they are self-reported through a portal or kiosk, and wondered whether those findings that aren’t identified by the physician would be followed up even less. The authors go on to discuss “the fact that a complete ROS may be required by billing guidelines at times when it is clinically unhelpful.” They call for clinicians to “claim ownership of the determination of what clinical information is required for appropriate care in which setting.” Very few clinicians would argue this point. We’re tired of generating notes full of irrelevant information and we’re tired of reading it when we see it. Changing documentation requirements would certainly help with the “note bloat” we’re all subject to.

In that same train of thought, CMS is calling for additional input on its Patients Over Paperwork Initiative. The announcement claims that “since launching in the fall of 2017, Patients over Paperwork has streamlined regulations to significantly cut the ‘red tape’ that weighs down our healthcare system and takes clinicians away from their primary mission.” I spend at least half my time in the clinical trenches these days and haven’t noticed any significant change in paperwork or red tape during that time. I’m not sure where their purported 40 million hours and forecast $5.7 billion savings is happening, but it’s not on the average physician’s timecard.

It’s that time of year. Hotel registrations for HIMSS20 are open, and even though it’s barely June, my preferred hotel is already booked for my preferred dates. The HIMSS Call for Proposals is also open through July 15. No word on keynote speakers and actual event registration doesn’t start until August. HIMSS is in Orlando again this year, and I never thought I’d say it, but I’m actually looking forward to going back to Las Vegas.

Due to some unexpected scheduling issues, I’ve had to spend more time in the clinic than I normally do. This week was punctuated by an entire day of EHR malfunctions, including failure of the system to talk to the pharmacy search API, which meant that we couldn’t do anything but print prescriptions if patients didn’t want them from our in-house dispensing system. Over the last decade, patients have gotten used to us sending their scripts to the pharmacy directly, whether electronically or by fax. The idea of printed prescriptions led to many requests for us to phone in the scripts and I rapidly discovered that not a single person on my staff that day had ever called in a prescription. Needless to say, we had a lesson because I wasn’t going to spend all day calling Walgreens.

We also had multiple random Citrix issues, chronic slowness, and random popups about some index failing to call the SOAP note. There was even an error message that cited my email address and I have no idea why it would even be listed in the EHR. I’m seriously disappointed in my vendor and their response – no resolution within 12 hours for sure, and at one point they stopped taking customer calls altogether. My practice suspected it had outgrown our vendor and I’m hoping that this is a wakeup call that it might be time to switch.