HHS announces that it will use its discretion to set maximum annual HIPAA fines based on level of culpability, reducing the amount for those with no knowledge from $1.5 million to $25,000.

Above are the old vs. new penalty tiers.

Nearly 40% of a large number of poll respondents don’t see Epic, Cerner, and Meditech getting new EHR competition in the next 10 years, although 25% of respondents think Silicon Valley firms could potentially enter that market. Holly says EHRs are a dying breed with the only hope being third-party add-ons to make it all work, while Bitbot foresees data science-driven workflows that will overshadow outdated databases and processes. DrLyle takes the long view that the future entails a lot more home care, virtualization, and at-risk entities setting up clinics whose needs could be met by a slimmed-down EHR for care tasks. Matthew Holt agrees that hospitals have tied themselves to Epic and Cerner and sees the threat being that chronic care will move to the home and hospitals see their business cut back to performing procedures and attending to dying patients. 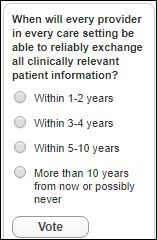 New poll to your right or here, as suggested by a reader who is COO of a health system that is making an EHR decision and looking at vendor interoperability capabilities and federal initiatives: When will every provider in every care setting be able to reliably exchange all clinically relevant patient information? (continuity of care document, consultation notes, discharge summary, imaging integration, DICOM diagnostic imaging reports, history and physical, operative note, progress note, procedure note, and unstructured document).

I’m interested in interviewing insightful, non-vendor people who are doing work that would inspire my readers. Let me know who you recommend. Many of those I reach out to don’t have the interest, time, or organizational approval to speak frankly (and some don’t have the courage to undergo an unscripted conversation), so I’m casting the net.

Meanwhile, Cerner implements a hiring freeze, telling employees that “we can do better if we target our attention on areas that represent the largest and most profitable growth opportunities and drive client satisfaction and retention.” 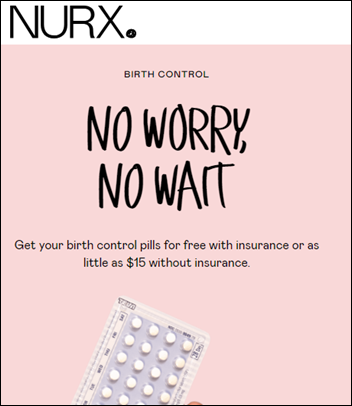 The New York Times notes the sometimes clinically sloppy practices of online birth control seller Nurx, which has used unlicensed personnel to dispense medications that had sometimes been returned by other customers, told its doctors to prescribe birth control to at-risk women as long as the patient agreed, and followed the Silicon Valley mantra of asking forgiveness rather than permission. The company responded to the article by saying that those practices ended a year ago with executive replacements. 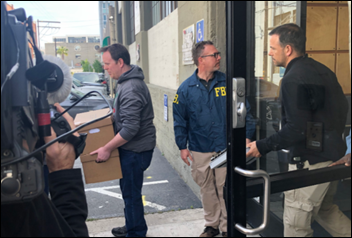 The FBI raids the San Francisco office of UBiome, which sells questionably useful AI-powered microbiome test kits for gut health and women’s health that are ordered by its own telemedicine doctors. Reports suggest that insurers complained about being overbilled by the company, while individual customers had previously filed Better Business Bureau complaints saying that their insurance was billed thousands of dollars for tests they thought they were buying in full for less than $100. The FBI is also apparently interested in how the company pays its doctors for referrals. In an interesting twist noted by CNBC’s Chrissy Farr, UBiome’s former product VP is now CEO at Nurx (see the item above).

Tampa-based, Hearst-owned MHK (formerly known as MedHOK) moves to a new 30,000-square-foot office at Harborview Plaza this week. The company has 250 employees.

Vocera announces Q1 results: revenue down 12%, adjusted EPS -$0.17 vs. $0.04, beating Wall Street expectations for both. From the earnings call: 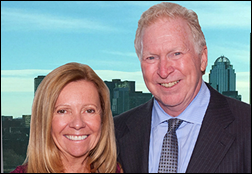 InterSystems founder Terry Ragon and his wife Susan donate $200 million to Massachusetts General Hospital to endow a vaccine research center, piggybacking onto their $100 million donation 10 years ago to fund AIDS vaccine research. The couple, whose net worth has been estimated at $2.5 billion, has signed the Giving Pledge, in which they will give most of their assets to philanthropic causes. Terry Ragon founded InterSystems in 1978 as a vendor of the MUMPS (Massachusetts General Hospital Utility Multi-Programming System) that was invented by two eventual Meditech pioneers (Neil Pappalardo and Curt Marble) and MD/PhD student Robert Greenes (now a biomedical informatics professor at Arizona State University). MUMPS powers systems sold by Epic, Meditech, and many other health IT vendors as well as the VA’s VistA. Privately held InterSystems has since added sophisticated database, integration, HIE, and clinical systems to its portfolio for both healthcare and non-healthcare sectors. 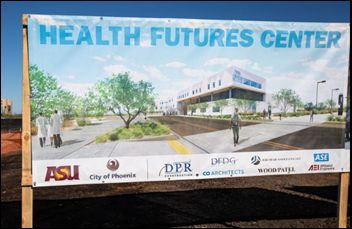 Arizona State University and Mayo Clinic break ground in Phoenix on the 150,000-square-foot Health Futures center, which will house a medical technology accelerator, research labs for biomedical engineering and informatics, and nursing programs. The facility, which will open in 2020, will be connected to Mayo Clinic