Today was an absolute whirlwind and I am only going to be able to capture the bare minimum because it’s already after 1 a.m. and it’s been a very long day.

Wednesday morning started as a disaster. Everyone was taking the shuttles because of the rain. Three passed me by without stopping, so I decided to hoof it. Since I’m always prepared, I had an umbrella, and with the traffic still managed to walk to the convention center faster than one of the shuttles that passed me. I took advantage of the plastic umbrella bag provided by the convention team, but wasn’t pleased to find the still-wet and slightly mildewed umbrella at the bottom of my bag. 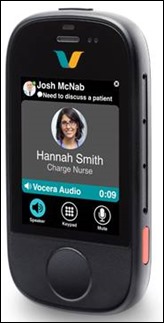 Among the things I saw today that I liked: Vocera’s new Smartbadge, which functions like a cross between their flagship communications device and a mini smartphone. Users can save directories of favorites, filter calls and messages, and set up a list of favorite contacts. It’s designed to be nearly impervious to liquids and is easily sanitized, and weighs about 90 grams. My favorite feature is the panic button, which lets staff summon help without being too obvious. With the increasing reports of healthcare workplace violence, it’s a useful feature.

Since I’m trying to absorb as much as I can about telehealth, I stopped by GlobalMed to learn more about their workstations. I liked their HD camera, which helped me see in one of their staff’s ears with a picture clearer than my own otoscope at home. It also had a dermatology camera with polarizing features which helps see deeper into the skin layers. I’m glad they didn’t demo that piece on me! They truly are a global player, in use in more than 50 countries.

The team at Lyft had pink sneakers for the gents and flats for the ladies. Even their visitor had great shoes. 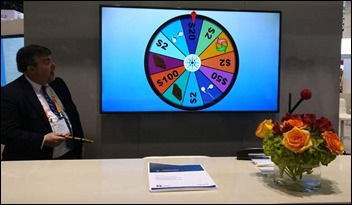 Medicomp’s wheel of prizes included chocolates and cash. You can’t beat that combination. 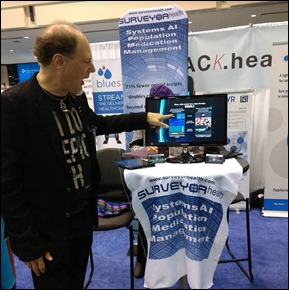 Surveyor Health showed me their medication management system. It was pretty slick. The presenter’s t-shirt that said “I DO EPIC SH_T” was a nice touch.

Vivify Health showed me their Chronic Care Management solution, complete with a Bluetooth-enabled kit that patients can use to send biometric data back to the office. The kits can be configured with scales, blood pressure cuffs, pulse oximeters, and more. The system uses a tablet to gather data and responses to patient questionnaires, plugging them in to a health score algorithm that helps identify the most at risk patients. I had a relatively new sales rep do my demo and he did a great job.

Among the things I saw today that I wasn’t too fond of: 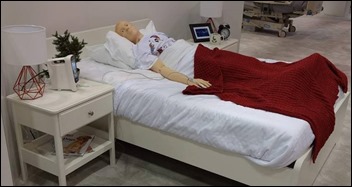 Masimo had this creepy mannequin in a room mockup. Novarad also had their model patients laying on the table while attendees used VR goggles to do something with them. They do it every year and it’s still weird.

One of the ladies doing a demo at a startup booth was chugging Red Bull during the demo. Not a good look.

Back to the happy thoughts:

Epic’s carpet was ridiculously thick and comfortable. Just be careful not to break an ankle when you first step onto it, especially if you are moving at speed. 3M also had the mega-thick carpet.

I attended a lunch featuring John Halamka and learned quite a bit from it. I’ll save it for a future write-up as there were lots of good nuggets. He was wearing his trademark black jacket and tee, leading some audience members who had never seen him in person to speculate whether he was channeling Steve Jobs.

In the afternoon I stopped by the launch of Zynx Health’s Lumynz product, which I mentioned yesterday. The team outdid itself and painted the town orange (or at least the booth) in honor of its new release. There were plenty of chocolates and wine on hand as well. That event kicked off the evening social schedule, which was one of the more robust ones I’ve had in a while. 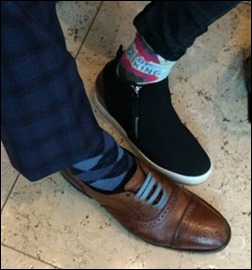 I started off meeting with some old friends at the Rocks Bar at the Hyatt, where I captured these kicks. You can’t see the detail, but the socks say “Stop Talking” and I think I need a pair. From there it was off to MDLIVE’s get together at Urban Tide, which was full of engaging people who have an interest in telehealth. I heard a lot of different perspectives on where the industry might be headed. 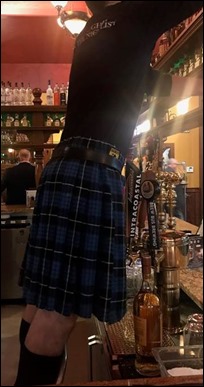 NextGen Healthcare’s party at The Pub was kiltastic. I chatted with one of their events staff because I’m always appreciative of the work that event planners perform. For those of you who don’t know the details behind how some of these booths, events, and parties are pulled off, there are many hard working people who make it happen. Thanks for a lovely time with a great band.

From there it was off to the Allscripts event at Del Frisco, with good food and nice wine along with their balcony which provided some much-needed cool air. The convention hall has been hot and muggy, at least to my senses, so I enjoyed the cool weather today after the rain stopped. The party really started swinging with the arrival of Matthew Holt and his entourage, and then we were off to the Google Cloud party at the House of Blues. 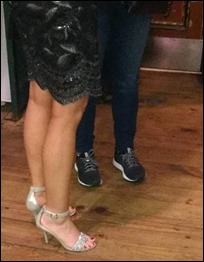 These folks arrived from the awards gala. There were many other great shoes, but I couldn’t get good pictures without seeming like a creeper. Kudos to pregnant woman in the red dress who was wearing heels, they were super cute. 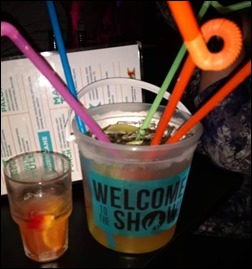 I had a chance to spend some time with industry heavyweights who convinced me to come with them to Howl at the Moon, which was quite an experience. One of the physicians in the group hoped that this multi-straw drink had a high alcohol content to kill any germs that might wind up in the communal bucket. It was one of those memorable late-night experiences, although I had to make my exit early to go home and capture the day’s events before my eyelids snapped shut. One more long day to go!