From Keeping It Real: “Re: NextGen blog post. I guess you get what you pay for in marketing and social advisors since someone was apparently OK with citing a competitor’s opinion piece.” I’m puzzled by the blog post that is attributed to NextGen Healthcare CMIO Robert Murry, MD since it not only cites a blog post of competitor Nextech, the Nextech post is hardly original (a “free” EHR may involve paid add-ons that make it more expensive than a paid system, it basically says). I’m pretty sure this was ghost-written by a NextGen marketing person since Bob has outstanding education and experience (not to mention his esteemed credential as a member of Dann’s HIStalk Fan Club on LinkedIn) and I doubt he’s looking to Nextech for inspiration. I’ll also say that I get puff pieces every day that are supposedly written by vendor C-level executives that clearly were hacked together by a marketing committee who took a quick, “OK, fine, whatever” response from the alleged author as meaning they did great when they clearly did not.

From Smallie Biggs: “Re: LinkedIn. Is it creepy when people write their entries in the third person or call themselves ‘Mr.’ or ‘Ms.’ in describing how wonderful they are? Absolutely. Stiffly written LinkedIn profiles make me question whether that person has an ounce of creativity or originality in them, and if they applied to work for me, I would be instantly prejudiced into moving on to someone who seems more human.

Listening: a good protest song and video from rapper Kap G (whose music I generally dislike) called “A Day Without a Mexican.” Kap G (real name: George Ramirez) proudly wears his Mexican lineage (literally) despite rather light cred given that he was born and raised in College Park, GA. I’m also really, really liking Spain-based Mägo de Oz (Spanish for “Wizard of Oz” with the mandatory metal umlaut thrown in because they have a sense of humor),  which deftly plays an amalgam of heavy metal, Celtic, and 1980s-style power rock, kind of like Iron Maiden, Asia, and Jethro Tull co-creating a Spanish-language metal opera from “Lords of the Dance.” They’re big in a lot of places that aren’t here.

Bedside patient engagement company GetWellNetwork acquires HealthLoop, a Silicon Valley-based developer of automated messaging for follow-up care. Terms of the deal were not disclosed. HealthLoop, which has raised $22 million since launching in 2009, will work with GetWellNetwork to develop an integrated solution called GetWell Loop in the coming months.

Audacious Inquiry names Keith “Motorcycle Guy” Boone (GE Healthcare) as informatics adept. I had to look that word “adept” up and I like it – it can be used as either an adjective or noun to describe someone who is skilled in a particular area. 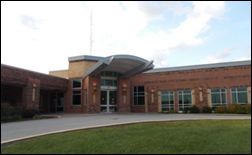 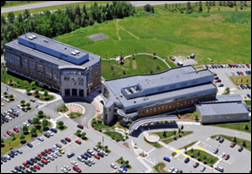 After a pilot study with Kaiser Permanente, the FDA releases the open-source code behind its new MyStudies app. The app was developed to give patients, providers, and developers an easier way to report and collect health data that can then be used to inform the development of drug and medical devices, and patient safety efforts. 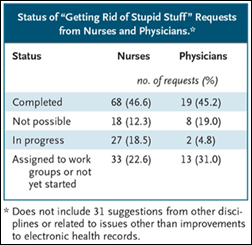 Hawaii Pacific Health VP Melinda Ashton, MD describes the origin and progress of the health system’s “Getting Rid of Stupid Stuff” program, which aims to streamline EHR workflows based on nursing and physician requests. Since launching in October 2017, requests have been submitted and acted on in three main categories – documentation that was never meant to occur, documentation that could be done more effectively, and required documentation that end users didn’t fully understand. Ashton says, “When the campaign was unveiled, it was largely met with surprise and sheepish laughter, then applause. We seem to have struck a nerve. It appears that there is stupid stuff all around us, and although many of the nominations we receive aren’t for big changes, the small wins that come from acknowledging and improving our daily work do matter.”

Mid Atlantic Permanente Medical Group cardiologist and Epic user Ameya Kulkarni, MD posts a thread of tweets reacting to Atul Gawande’s New Yorker piece on the contempt physicians have for their computers, noting more than once that the EHR is not the biggest contributing factor to physician burnout. “To fight burnout,” he says, “we need to think about how our communication systems increase loneliness and reduce agency. These are the key drivers. … And working on loneliness means 1) creating opportunities for real world interaction with colleagues and patients & 2) Simplifying documentation requirements so notes become communication tools again.”

A study of the EHR experience of medical students in Australia finds that they have no problems learning it, using it, or understanding its advantages. They also don’t feel that using the EHR detracts from patient interaction or rapport. They do, however, say that the EHR doesn’t help them learn as much as they expected. 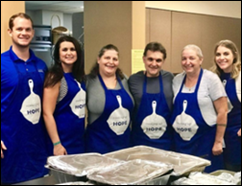