There was some chatter in the physician lounge this week about a study published in JAMA Network Open looking at the accuracy of EHR medication lists vs. the substances actually found in patients’ blood. Researchers looked at 1,350 patients and found that while a majority of medications were detected in the blood as listed in the EHR, there were many more medications detected that were not reflected in the EHR. Such incomplete documentation prevents systems from performing drug-allergy and drug-drug checking, placing patients at risk.

As much as some clinicians don’t like it, I prefer when patients bring in all their medications and supplements, even if it takes extra time going through a brown bag, shoebox, or tote. That way we can keep the EHR updated and also physically impound medications that patients shouldn’t be taking, if warranted.

There was also a fair amount of conversation around Tuesday’s elections, and the various positions held by candidates regarding healthcare. Kaiser Health News published a great piece looking at the various terms being thrown around during the election, including single-payer, universal healthcare, and Medicare for all. Gubernatorial candidates in California, Massachusetts, and Florida were pushing for state-run single-payer systems, where others were calling for less specific “universal coverage” or “public option” provisions. Like those mentioned in the article, the physicians around my lunch table didn’t fully understand the different models or what they might mean not only to their practices, but to their families.

There was zero chatter around the announcement by CMS that access to Quality and Resource User Reports and PQRS Feedback Reports will be sunset at the end of December. Since 2016 was the last performance period for those programs and 2018 was the final payment adjustment year, there isn’t much of a need for the reports to remain online. Physicians or their authorized representatives can download them until December 31, but it’s unclear how many providers reviewed the data in the first place or whether they tried to use it to drive practice-level improvements. Reports will be available eon the CMS portal for those of you looking for a little bedtime reading.

As I was getting ready to leave, one of my colleagues asked me what I thought of Atul Gawande’s recent New Yorker essay on “Why Doctors Hate Their Computers.” He takes readers through Partners HealthCare’s journey from homegrown EHR to Epic, and all of the physicians around the table were familiar with that 16 hours of training he leads with. (In our case, it was 17, and let me tell you everyone was counting.)

Having run more than a handful of EHR implementation projects, I loved Gawande’s description of his trainer, “younger than any of us, maybe a few years out of college, with an early-Justin Bieber wave cut” whose technique incorporated “the driver’s ed approach: You don’t want to be here; I don’t want to be here; let’s just make the best of it.”

Gawande walks us through his own thoughts about the rise of computers, including the once-coveted Commodore 64, which brings back memories for some of us who have been on the cutting edge. Having been the second person I knew with a modem (the first being the guy from whom my brother bought the used card from), I felt a little bit of his pride and optimism as he readied himself for training. The last three years have quashed that optimism, however, and he has “come to feel that a system that promised to increase my mastery over my work has, instead, increased work’s mastery over me.”

I appreciated his discussion of “the Revenge of the Ancillaries,” where design choices were considered by constituents from various parts of the organization. He makes a point that was telling: “The design choices were more political than technical: administrative staff and doctors had different views about what should be included. The doctors were used to having all the votes… Now the staff had a say (and sometimes the doctors didn’t even show.)”

I’ve seen that happen during several build decision projects, and it sounds like there may not have been adequate checks and balances in the governance process. For example, requiring stakeholder signoff in addition to participation in the working groups. Requiring user acceptance testing of critical workflows would also have caught some of the issues he cited, such as hard stops and required fields, prior to the go-live. He also highlights issues with the maintenance of patient problem lists that are exacerbated by governance issues, with duplications and lack of specificity in entries. Cut and paste is also an issue, one that could be addressed by governance and consensus among users about the best way to use the EHR.

Gawande does discuss the phenomenon of governance, noting that, “As a program adapts and serves more people and more functions, it naturally requires tighter regulation. Software systems govern how we interact as groups, and that makes them unavoidably bureaucratic in nature. There will always be those who want to maintain the system and those who want to push the system’s boundaries.”

I’m in agreement, but it’s still a challenge to figure out why organizations don’t spend the time needed up front to define some of these goals. What is the vision for the new system? How does it support the mission? What are the expected outcomes? How do we define success? Instead it’s often a race against a timeline, which may or may not reflect organizational tolerance for a particular speed of change. The best implementation I ever worked on had a motto of “go slow to go fast.” We may have spent more months in the design and build phase than other organizations, but when we went live, we hit the ground running and there were very few changes needed to the system in the first few months.

Mr. H has already commented on the Gawande piece, and one reader shared their thoughts on the physician mentioned who admittedly ignores messages in her inbox and deletes them without reading them. I hope there aren’t any patients reading The New Yorker who might have a concern about their care in her practice, because if she is ever called into court about a missed diagnosis, things aren’t going to end well for her. I can’t imagine publicly admitting that I don’t review results and I doubt that the medical staff administration is going to think too kindly of it.

Reading the piece from the perspective of a clinical informaticist, there’s a lot to unpack, and also a lot of opportunity to potentially improve things for the impacted physicians. I’m not sure what I think about it from a patient perspective or a non-IT perspective, since it oversimplifies and under-explains some of the complexities that have brought us to where we are. That’s what I told my colleague, and I ended with a reminder that the one of the EHR subcommittees still has some openings, so if he wants to be part of the solution, there’s a venue available. 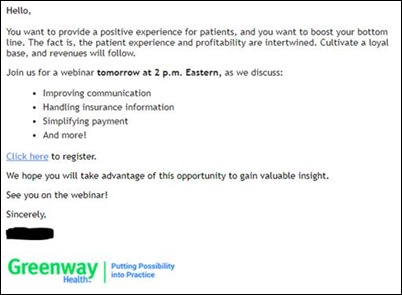 I don’t frequently call out companies for wacky marketing, but this one is baffling. The subject line of the email advertises a profitability webinar with “cybersecurity strategies you can use,” but the email itself discusses patient experience and how to “cultivate a loyal base.” Oh yeah, and there’s the part where they sent the invitation out less than 24 hours in advance for a webinar that is in the middle of the work day. For mass marketing emails, I’d recommend peer review at a minimum before sending them out. Get it together, folks.

[UPDATE] Greenway Health was quick to read Dr. Jayne’s comment and apologize that their email preview line displayed incorrect wording (the subject line itself was correct). They also note that this was the third in a three-email series, so those who wanted to sign up had ample time well before this email. They also say their surveys and best practices indicate that 2:00 p.m. ET works best for providers.

Do cold emails entice you to join webinars in the middle of the day? How many do you register for that you end up not attending? Leave a comment or email me.