A review of 9,000 EHR-related pediatric medication events in three hospitals that use Cerner or Epic finds that EHR usability contributed to 36 percent of the reports, while 18 percent appear to have caused patient harm.

The most common problem areas were lack of system feedback and confusing visual displays.

The authors recommend that ONC add pediatric safety and usability measures to its certification requirements, that vendors and providers use realistic test-case scenarios, and that Joint Commission include EHR safety in its accreditation.

From Indigenous Species: “Re: records request. I was a patient of Cleveland Clinic of Florida, which I believe is a big Epic user. They have a fancy patient portal. I used it to request a copy of an operative report and they said I had to contact the medical records department by telephone. I got through the automated attendant to the point I received a message saying I needed to either mail in a request or fax it, after which I could expect something in 10-14 days. Gazillions of dollars spent on Epic and where are we? The same place we were 20 years ago.” Cleveland Clinic Florida’s instructions (above) are embarrassing for any hospital, much less a universally-admired one – in what time warp do patients have a fax machine sitting in their homes (or for that matter, a landline to plug it into)? Why do hospital HIM departments so quickly and firmly reject the idea of printing, signing, scanning, and emailing a completed form (or even better, using DocuSign) in favor of getting their fax fix? Meanwhile, the hospital’s authorization to disclose form is, not surprisingly, a consumer-unfriendly mess for those who just want a copy of their own information. It only covers sending information to someone else, and if that’s not bad enough, the form’s footnote adds, “Cleveland Clinic Florida may, directly or indirectly, receive remuneration from a third party on connection with the use or disclose [sic] of my health information.” That’s an interesting revenue stream – taking a cut of the fees their patients are paying to obtain their own information. I hereby nominate them for my “Least Wired” consumer award, for which they may nose ahead of stiff competition via the form’s outdated reference to “venereal disease.”

From Onion Peeler: “Re: startups. Where can we send our news?” I answered, but this reminds me of a pet peeve. The misused term “startup” should carry an expiration date of maybe 3-4 years, beyond which the defining characteristics — continued outside investment, demonstrably fast growth, lots of industry buzz, and an infrastructure designed to scale — are no longer true. By that point, it’s just a less-sexy sounding small business, not that there’s anything wrong with that. Maybe “startup” should be added to the list of terms that are meaningful only when someone else uses them – innovative, world class, award-winning (preferably detailing who gave the award and for what), and disruptive. Otherwise, it’s just BSaaS. 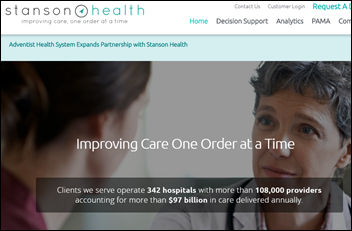 Premier will acquire clinical decision support vendor Stanson Health for up to $66.5 million in cash. The announcement also notes that Stanson is developing a prior authorization system for medical and pharmacy benefits. Founder Scott Weingarten, MD, MPH, who is also SVP and chief clinical transformation officer of Cedars-Sinai, will remain as leader of the business. Stanson had raised just $3 million in a single Series A funding round in mid-2015.

MJH Associates, which runs conferences and magazines such as Pharmacy Times and The American Journal of Accountable Care, acquires Medical Networking, Inc., which operates the Medstro communities and online challenges platforms as well as the Medtech Boston website.

Microsoft will shut down HealthVault’s Direct messaging service as of December 27, 2018, according to an email forwarded by a reader. The company did not provide a reason. The company says “other messaging services” are available, but the notice doesn’t list them and I saw no alternatives on its website except for CCD exchange. I’ve emailed Microsoft’s press contact but haven’t received a response. 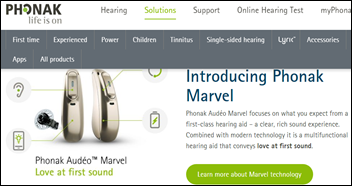 In what might be the first use of teleaudiology, hearing aid manufacturer Phonak will offer access to hearing care professionals to perform online fitting and tuning via its remote support app. The company’s rechargeable hearing aids can already connect to mobile devices via Bluetooth to provide optimized sound quality for TV, music, and phone calls and its MyCall-to-Text app converts telephone conversations to text in real time. Hearing aids are inherently unexciting unless you need them (or need to pay for them, which is exciting in all the wrong ways), but this seems like pretty cool technology. Switzerland-based parent company Sonova Group is the world’s biggest hearing care solutions vendor (or close to it) with 14,000 employees and $2.7 billion in annual sales. 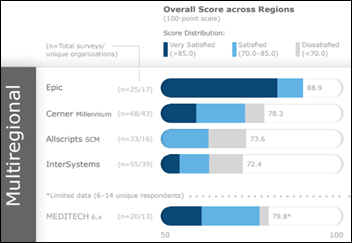 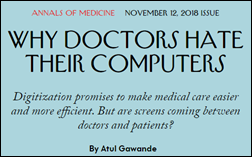 Atul Gawande’s piece in The New Yorker titled “Why Doctors Hate Their Computers” makes these points:

Epic further explains how the recently mentioned New York Life integration works. People applying for life insurance ordinarily have to supply their medical history on paper after obtaining it from their hospital, a slow and expensive process. The integration uses Epic’s Chart Gateway service, which when authorized by the patient and the health system, sends information electronically to life insurance companies. It’s not blanket access to MyChart or to the data of any other patients. This is the first time I’ve heard of Chart Gateway.

The Wall Street Journal explains why smart speakers like Amazon Echo can’t make voice-requested 911 calls, at least for now: (a) lack of GPS precision; (b) inability to be called back by operators; and (c) users would need to pay 911 surcharges as they do for cell service.