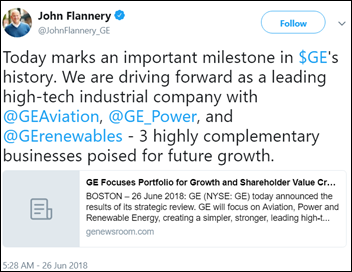 GE will spin off its GE Healthcare into a standalone business as the struggling behemoth that yearns to be a “simpler, stronger GE” focuses on its aviation, power, and generator businesses.

GE Chairman and CEO John Flannery said in a statement, “GE Healthcare and BHGE [the former Baker Hughes oil field division] are excellent examples of GE at its best—anticipating customer needs, breaking barriers through innovation, and delivering life-changing products and services. Today’s actions unlock both a pure-play healthcare company and a tier-one oil and gas servicing and equipment player. We are confident that positioning GE Healthcare and BHGE outside of GE’s current structure is best not only for GE and its owners, but also for these businesses, which will strengthen their market-leading positions and enhance their ability to invest for the future, while carrying the spirit of GE forward.”

GE Healthcare President and CEO Kieran Murphy will continue his role with the standalone company, which brought $19 billion in 2017 revenue before its jubilant unlocking.

From Sullen VIsage: “Re: Athenahealth. This poll says they should not sell out to Elliott Management.” I wouldn’t assign much value to an online poll whose results are headlined without indicating how many people voted (that site’s past polls have had a pitiful turnout), but there’s also the bias of customers and employees to resist change. Publicly traded companies, however, have just one customer – their investors — and the company is obligated to take whatever course of action that maximally enrichens them. The real question is whether that enrichment might be woefully short term versus the longer-term value that could be wrung out by keeping customers happy, improving efficiency, and allow their strategies the time to mature. However, corporate raiders are more interested in yard saling the assets and moving on to the next company rather than building value, while investors aren’t opposed of the idea of banking a quick profit by selling off the body parts.

From Pomposity: “Re: CareSync. Clueless management strikes again and leaves employees hanging.” Maybe, but we don’t know why the company suddenly closed its doors. The timing suggests a due diligence issue that was performed late in the process, plus we already know from the “ran out of time” comments that the company was desperate to mate with a sugar daddy. You have to stop the bleeding at some point. It is hard to fathom, however, how a company could raise nearly $50 million, hire a ton of people and move them into a swanky headquarters, operate in what seems like a promising business sector, and then blow up whatever asset value and goodwill remained by just turning off the lights for good. I can only speculate that despite the investment interest, the company was burdened with so much debt that even bankruptcy couldn’t have saved it. It’s also hard to fathom why CareSync needed 300 employees to run what seems like a simple, modestly promising business, but I can’t second guess the folks in charge since their money was on the line and mine wasn’t.

Outcome Health co-founders Rishi Shah and Shradha Agarwal – who had already resigned their top executive positions in a settlement with investors who claimed the company had defrauded them – leave their board positions as the company tries to regain credibility and its pre-scandal $5 billion valuation.

Change Healthcare releases Assurance Attach Assist, which reduces provider claims rejection by recognizing the documentation that payers require and providing an electronic platform for its submission and management.

A GAO report finds that the VA was spending $1 billion per year maintaining VistA, but even as it plans that system’s replacement with Cerner, work remains to define exactly what VistA is – especially regarding its site-specific customization – and how Cerner can replace the nearly 50 percent of VistA applications that don’t have a Cerner counterpart.

The American Hospital Association tells CMS that it “strongly opposes” making interoperability a requirement of Medicare participation, noting these problems: 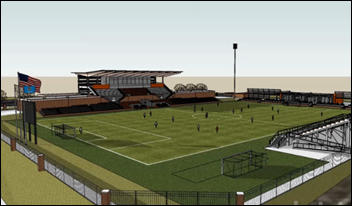 A Bloomberg analysis finds that government-encouraged employer experimentation with high-deductible health plans in the 1990s has made them nearly universal, with the result being that cash-strapped patients have simply stopped getting medical care instead of shopping for healthcare value as politicians had predicted. The plans have saved employers money, but in ways that seem to have harmed the long-term health of their employees in ways that may eventually become the problem of taxpayers who fund Medicare and Medicaid. A Comcast executive says, “Why did we design a health plan that has the ability to deliver a $1,000 surprise to employees? That’s kind of stupid.” He didn’t mention the people who buy their own insurance on the individual market who will be likely sucked in by the lower premiums of junk policies such as association health plans, whose nearly indecipherable terms exclude basically anything that requires a significant payment, such as those involving pre-existing conditions. As a restaurant guy told me once, you can buy hamburger meat at nearly any price you want to pay, but that doesn’t mean you would want to eat it.

A TransUnion Healthcare study finds that an average hospital stay sticks the patient with a $781 bill after their insurance has paid, a 67 percent increase in the past five years.

In Japan, two people with cancer die untreated after hospital radiology departments fail to share their diagnostic images with other departments within the same hospital , while several other patients required more complex surgeries due to treatment delays. An expert says information sharing has become more complicated as increasingly sophisticated medical equipment has increased data volume.

Interesting: the Kansas City paper describes a county IT guy’s experimentation with a cheap antenna to allow his laptop to pick up TV stations, during which he started intercepting unencrypted hospital pager messages that included names, demographics, and diagnoses. The paper contacted one of the patients whose name appeared in the message, to which she offered her succinct reaction: “What the hell?”