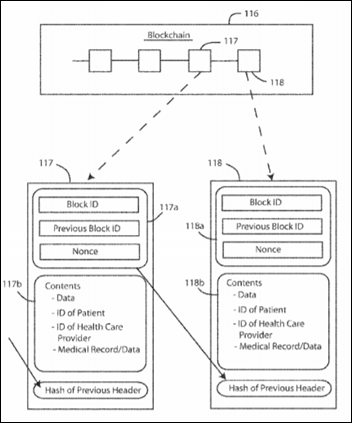 Walmart patents a system for storing a patient’s vital medical information in blockchain database housed in a wearable device.

From Uncle Carbuncle: “Re: IT department names. I’ve seen it go from DP to MIS to IT and now sometimes to technology services.” I would add “information services” to your list. I once worked in a health system’s IT department that used that name, I had a pretty great office in the executive building near the flagship hospital’s entrance. Many early mornings a patient or a visitor would exit confused from the elevator and follow the light to my door (since I was usually the first one in the office suite). They had seen the “information services” sign on the sidewalk close to the hospital’s entrance and were looking for directions. I actually enjoyed riding back down the elevator with them and walking them to the front door, especially since I’m sure some of them were nervous. I also knew that their way-finding challenges were just beginning since we had a remarkably unhelpful system of colored floor lines, puzzlingly named zones, and signage that failed to overcome user-unfriendly hallways created by constantly tinkering with the available space in ways that left even employees lost at times.

From Electric Avenue: “Re: your list of sponsors that are leaving. Did you insult them with something you wrote or failed to write?” Never, as far as I know, since my sponsors understand that they don’t get editorial control or the option to post fluff pieces on HIStalk like other sites offer. The most common reasons for dropping are: (a) the company’s low-level marketing person who was assigned to deal with us leaves and nobody left knows anything; (b) the company is acquired; (c) they’re out of money; or (d) a new marketing VP is trying to score points by cancelling any relationships they didn’t personally initiate. The first reason is by far the most common – turnover in vendor marketing departments, especially among the less-senior folks, is apparently astronomical.

I forgot to mention another gratifying aspect of my unplanned urgent care visit this past weekend that happened while taking a mini-vacation way out in the sticks. I was worried whether my problem required an ED visit and recalled that my new concierge service includes having the personal cell number of my solo practice PCP. I reluctantly called him just after dawn on Saturday morning. My doc was perfectly caring, thoughtful, and supportive in suggesting a plan of action. I told him how much I hated waking him up and he reassured me with, “that’s what I’m here for.” It’s an amazing deal for an all-inclusive price of $60 per month, which includes many lab tests, imaging procedures, minor surgical procedures, and at-cost prescriptions. He treats me like a valued customer with whom he has a long-term relationship that benefits us both. I only hope he doesn’t go broke in hesitating to price his services more reasonably. 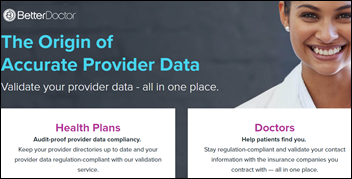 Christus Health will implement Vyne Medical’s Trace voice recording and quality assurance platform to identify discrepancies or confusion about the information given to patients.

A Change Healthcare payer study finds that value-based care is reducing healthcare costs more than expected and now account for two-thirds of payments.

UK-based Medicalchain will explore the potential benefits of blockchain in healthcare with Mayo Clinic.

A new KLAS report on cybersecurity services (advisory, technical, and managed) finds that CynergisTek leads in breadth of services and number of engagements for advisory and technical services, while Fortified Health Security has the highest number of managed services engagements. The most commonly requested services are performing risk assessments and security program assessments.

The pre-existing conditions political football has generated interesting debate, including the Republican argument that guaranteeing coverage and the same premium prices to those who are either sick or well tests well in voter polls … until the question is reformulated to ask whether it’s OK for sick people to pay the same premiums as healthy ones, in which case even many Democratic voters say no. It’s an interesting exercise trying to educate healthcare-uninformed voters exactly how insurance works, who pays and who profits, and how risk pools work to calculate premiums.

Washington Health System (PA) suspends at least 12 employees who are suspected of looking at the medical records of a co-worker who was killed when a driver lost control of his car and ran into a WHS building. 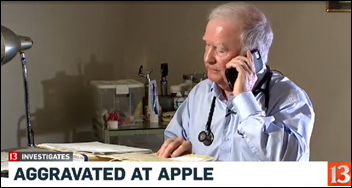 An Indiana doctor sues Apple for interrupting his medical practice with the “devious trick” of forcing IOS updates without the user’s approval as a requirement for its further use. He sent Apple a bill for the $200 time he claims he lost and demanded that his phone be returned to the previous IOS version, then filed the lawsuit after Apple declined to do either.

Bloomberg profiles – with an embarrassingly click-baiting headline – the outcome-predicting Medical Brain project of Google. It notes (barely) the failure of IBM Watson Health to accomplish the same goals of reducing cost or improving outcomes. The author’s analysis must have been superficial in failing to note that Google has already tried and failed to “break into the healthcare business” with its miserable, short-term Google Health project.

I missed this article until someone tweeted it out: “Why Doctors are Running Out of Empathy,” a physician’s bleak look at what our healthcare “system” has turned into with some interesting insights:

If we take the word “healthcare” to mean the mishmash of hospitals, doctors, insurance companies, and vendors that profit from our physical and mental maladies, then perhaps it would be more accurate to call [our healthcare system] “sickness-billing” … Government food policies … resulted in a massive increase in calorie-dense, nutrient-poor, and highly processed “foods” in our diet …led to dramatic increases in obesity, diabetes, heart disease, cancer, and autoimmune disorder rates in the United States. The costs borne by Medicare and insurance companies consequently swelled, producing a strained “system” unprepared to handle the increasing need for preventive care. In response to rapidly rising costs, Medicare (to which most insurance companies look for guidance) created a growing number of obstacles to reimbursing doctors and hospitals, and all payers followed suit. These obstacles started as documentation-focused rules, requiring doctors to record a certain number of data points for each medical visit, otherwise reducing reimbursement. This is why your doctor, during your visit for an ankle sprain, may ask if you have had any constipation, vaginal bleeding, or ringing in your ears … EMRs dramatically reduced physician productivity. This was primarily because the EMR companies got away with designing software with horrendous user interfaces and user workflows .. . the Internet buzzed with stories of Epic bullying anybody who criticized its software. Can you imagine the backlash if Microsoft or Google tried to place gag orders to prevent criticism of their software?

This says a lot about US healthcare. UK-based drug company Indivior will seek an injunction to halt FDA’s approval of a generic to its opioid addiction drug that generates 80 percent of its $1.1 billion revenue and $320 million profit. It also obtains a restraining order against an India-based competitor that was preparing to launch the generic. Indivior says it will introduce a generic of its own for some reason and will cut its operational costs, Shares dropped 23 percent on the FDA news. 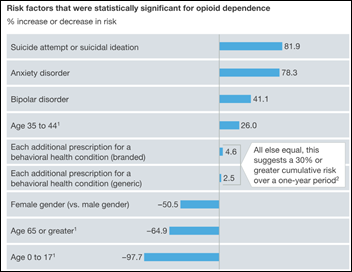 WHO adds “gaming disorder” to ICD-11, saying that it is similar to drug addiction because it can take precedence over the patient’s other activities, they can’t stop playing even after they experience negative consequences, and their sleep, diet, and work performance suffer.