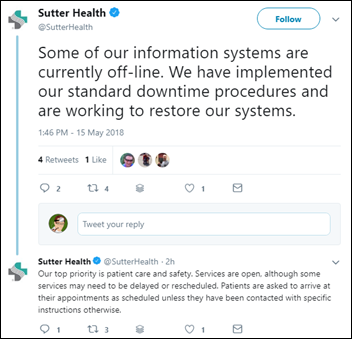 Sutter Health confirms that some of its electronic systems remain down from an unstated problem that started late Monday. Sutter’s Epic system in at least some of its facilities as well as its public website are offline.

Some of the health system’s 24 hospitals have cancelled surgeries and gone back to paper during the downtime, but have access to Epic’s locally stored copy of patient information.

A spokesperson said late Tuesday that the downtime was caused by the activation of a data center fire suppression system.

From Don’t Understand Investments: “Re: investors. Why don’t they put their money into companies that address problems like social determinants of health, public health, and mental illness? Those are the biggest issues we face.” Here it is in a nutshell:

From Skip Tumalu: “Re: EHR vendors and prescription pricing. I’ve heard that some insurers provide real-time prescription pricing to EHR vendors for physician use in helping patients get their meds filled, but in return they bar those EHR vendors contractually from displaying anyone else’s lower drug prices. That forces patients to buy medications from the payer’s own pharmacy benefits manager. Is this widespread?” Tell me anonymously if you’ve seen one of these contracts, or even better, send me a copy that I will redact. 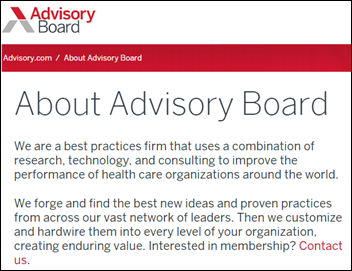 Elliott Management scolds Athenahealth’s board publicly for failing to respond to its $7 billion acquisition offer, adding that it knows Athenahealth has received acquisition interest from other parties as well. Elliott’s offer letter said Athenahealth’s value has been hurt by executive turnover, low margins, product execution, quality of service that fails to meet its “grand vision,” and poor financial forecasting and guidance. It also says former GE Chairman and CEO Jeff Immelt was a poor choice for Athenahealth’s board chair and questions why the company hasn’t hired a full-time president since promising to relieve CEO Jonathan Bush of that additional responsibility nine months ago.

Crowdsource investing platform RedCrow is focusing on early-stage healthcare startups and has partnered with Cleveland Clinic, but that’s not nearly as interesting as this: one of the co-founders is Jerry Harrison, former guitarist of long-defunct band Talking Heads.

Retired HIMSS CEO Steve Lieber’s victory lap continues as he joins recruiting firm Quick Leonard Kieffer to assist with executive search in the oddly titled position “of counsel,” of which that company has several.

Market research firm Kalorama names Cerner as the global EHR market leader with a 17 percent market share, followed by Epic at 9 percent and Allscripts at 6 percent, although: (a) the company doesn’t disclose the methodology behind the $4,000 report; (b) they don’t say what they mean by “market share” (I’m guessing annual sales, which would be a SWAG for privately held companies that don’t release that information and not the same as market penetration or number of beds or providers); and (c) the author’s credibility is questionable given her quote that Epic is “acquiring technology” for physician practices (apparently unaware that Epic has never made an acquisition) and listing Kronos as a EHR vendor (perhaps confusing the labor management systems vendor with actual EHR vendor DrChrono).

A GAO investigation commissioned under the 21st Century Cures Act finds that patients are sometimes charged more than HIPAA allows for copies of their medical record. Two patients interviewed were charged over $500 for a single request, one had to pay $148 for a PDF copy, two were told they couldn’t get their information unless they paid a subscription fee, and one was charged a retrieval fee by the hospital’s release-of-information vendor, which is explicitly prohibited under HIPAA. Investigators also found that providers were often unaware of the patient’s right to their records or that the federal government limits the allowed fees. GAO asked HHS OCR how it handles patient access complaints and the results are not surprising – providers are basically never penalized but instead are given “technical assistance” that, at least in my personal experience with filing a complaint about a hospital that refused to give me my records electronically in saying they aren’t required to do so, lets the provider off without doing anything.

A Black Book survey of 680 provider organizations finds that 96 percent of their IT security professionals worry that hackers are outpacing their ability to maintain information security due to flat budgets and lack of staffing. One-third of executives whose organizations recently bought cybersecurity solutions say they did so blindly and 57 percent of IT management respondents say they don’t even know the full extent of available solutions for mobile security, intrusion detection, attack prevention, forensics, and testing. Thirty-two percent of organizations didn’t scan for vulnerabilities before an attack and one-fourth of them haven’t performed measurable cybersecurity assessments.

Sheriff’s deputies arrest an underage high school student for hacking into his high school’s computer system to change grades. He set up a replica of the school’s website, spent five minutes sending a phishing email asking teachers to log in, then used the credentials they entered on his site to log in to the real system himself. Officers tracked him down at his parents’ house by getting a warrant to obtain the IP address of the fake website from his web host, then used an electronics-sniffing dog (who knew?) to find the flash drive he had hidden in a tissue box (a lot of good jokes are awaiting your creative ribaldry). 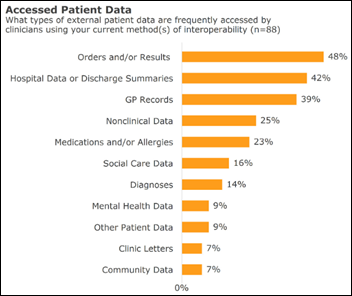 A new KLAS report on interoperability in England’s NHS finds that data-sharing is rarely integrated with physician workflow and the exchange of structured data is uncommon, with one-third of organizations displaying external information via a separate EHR tab and another one-third using a standalone portal. Other challenges include unstructured data, inconsistent formatting, and missing data. The most significant barriers to interoperability are lack of standards, unwillingness to share, vague information governance, and a lack of understanding across care setting. The most widespread sharing is via HIEs, of which InterSystems and Cerner are the top vendors. 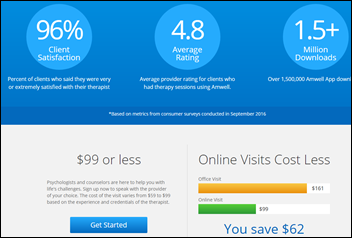 Newly released tax forms indicated that UPMC paid 32 executives $1 million or more and 10 of those more than $2 million in FY17.  I couldn’t find its CIO’s salary in the non-searchable PDF, but it was a large document and I might have missed it. 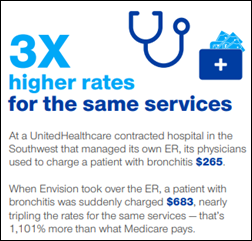 Forbes profiles money-losing ED and anesthesiology outsourcer Envision, which is taking heat for increasing healthcare costs through out-of-network billing (62 percent of its bills vs. a hospital average of 26 percent) that increases cost more than 100 percent in hospitals that hire it. A stock short-seller claims Envision’s business model is a “scam,” claiming that it pays physician groups cash upfront to lock them in at below-market rates for up to 10 years and thus is capitalizing salaries and then using its cash flow to sign up new practices. Envision blames high-deductible insurance plans, inadequate insurer payments to ED doctors, and the fact that EDs have to evaluate all patients regardless of ability to pay. 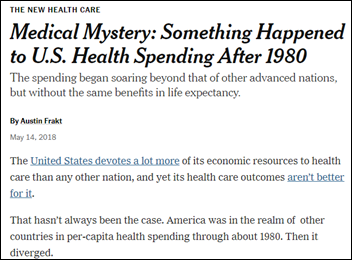 My favorite newfound healthcare expert is Austin Frakt, PhD, a professor and VA policy director who is a fun writer contributes to The New York Times. His latest piece on why healthcare costs took a dramatic upward turn versus other developed countries in 1980 even as life expectancy started declining is getting extensive exposure, but I also like his informal speculation about the cause:

Maybe our health system caters to the wealthy. As their incomes grow, so does their demand for ever more expensive, high-tech care that is only marginally better than what came before. Political and social influence being what it is, they get it, but we all pay for it. The share of our economy going to healthcare grows. But outcomes for the vast majority of the population with lower incomes don’t improve as much, because more high-tech, expensive, low-value healthcare isn’t what they need as badly as they need higher wages, better education, better housing — things provided by other social programs that the healthcare budget is consuming.