Despite technical problems that delayed business on the German stock exchange by an hour, Siemens AG raises $5.2 billion in its Healthineers IPO. Funds will be used to invest in molecular diagnostics and to acquire US-based health IT startups.

From Lizzie Borden: “Re: Theranos board and advisors. It looks like at least one member of the infamous company’s scientific advisory board is getting proactive about making sure industry insiders know she’s distanced herself from the company.” The Washington University School of Medicine has indeed assured the media that professor Ann Gronowski left the Theranos board at the end of last year, even though the company’s website still lists her as a member. Sources report that two other advisers still remain on the SAB, which was formed in 2016 to lend credibility to the company’s under-fire efforts.

Thanks to those who responded to “What I Wish I’d Known Before … Taking My First Hospital IT Executive Job.” I can’t say I’m surprised at how frequently hospital politics came up.

The next installment of the series is your chance to help future patients and caregivers learn from your past experiences in the hospital or ED. 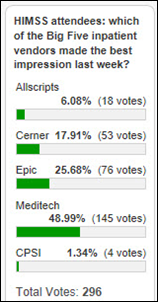 Meditech was the favorite in a highly unscientific poll that mostly garnered votes from IP addresses associated with the vendors listed.

New poll to your right or here: How far along are EHRs in delivering a "comprehensive health record" that paints a full patient picture?

CNBC reports that Amazon has hired Taha Kass-Hout (Trinity Health) to head up healthcare project business development on its Grand Challenge team. Also known as the 1492 Lab, Amazon’s team stealthily launched last year to focus on projects related to medical records management and access, though not much has been heard from them since. Much is being made of the fact that Kass-Hout was the FDA’s first chief health informatics officer. 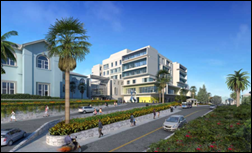 In Bermuda, the Hospitals Board integrates eForms from Access with its Cerner EHR at King Edward VII Memorial Hospital and the Mid-Atlantic Wellness Institute. 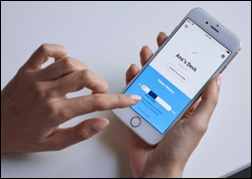 This sounds a bit Big Brotherish to me: Herman Miller introduces a smart office chair that, when paired with its smart desk and app, gives employers insight into how long workers spend at their desks, times of highest productivity, and whether they’ve gone to the restroom or left for the day.