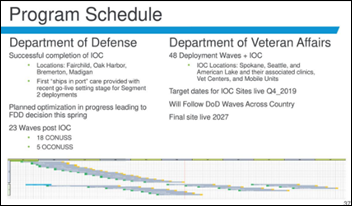 Cerner says in its HIMSS conference investor presentation that the VA will go live in 48 waves that will begin in Q4 2019 with pilot sites and then run through 2027, while DoD go-lives beyond the pilot sites will start this fall and go live in 23 waves (assuming the project reviews in both result in a go-ahead verdict). The company is also pursuing government opportunities with the Coast Guard, Indian Health Services, and CDC.

From Amy Contagious: “Re: HIMSS. I’m wondering what if any sickness people returned from the conference with? I have a light case of norovirus or similar. Wondering how many colds, flu, food issues, etc. since I don’t recall anything except exhaustion last year.” Attendees, tell us here. I’m happy to have returned just fine, other than I’m scared to get on the scales to measure the after-effect of a week’s worth of dietary destruction. Some of it was worth the calories, such as the amazing burger and fries, pizza, and wings at Home Plate Grill & Bar. I didn’t go to a single party or vendor event, spending my evenings in the rental house writing HIStalk, so low-key places nearby were just fine.

From Patiently Participating: “Re: patients at HIMSS. Did you sponsor patients to attend again this year?” I did not. I like the idea of having tech-savvy people who are actively involved in managing their chronic conditions (as well as caregivers) participate in health IT. However, I learned last time that more prep work is needed before just turning people loose in the glitzy exhibit hall to challenge random booth salespeople. Like most trade group conferences, HIMSS isn’t really designed for people who aren’t working in the field  (whether that’s a feature or a bug is debatable) and just having consumers drop in isn’t necessarily productive despite noble intentions. My recommendations for offering scholarships are:

From Tarheel: “Re: Novant SVP/CIO Dave Garrett. Has left the organization.” Unverified. Dave hasn’t ever been listed on the health system’s leadership page from what I can tell, but it now contains the bio of EVP/Chief Digital Officer Angela Yochem, who was hired in January. She doesn’t have any healthcare experience except for a short stint as CTO for drug maker AstraZeneca. Novant paid Dave $1 million per year, according to its latest tax forms, but he still made less than the chief consumer officer ($1.5 million) and several others just in case you were thinking that “non-profit” implies “modestly-compensated executives.”

With HIMSS behind us, let’s get back to the “What I Wish I’d Known Before” question about taking your first hospital IT executive job. Or more specifically, your response. Here’s mine: I wish I’d know that non-profit health systems have just as many conniving middle managers as any business, stabbing your back regularly in trying to wrest internal or external IT control. A lot of hospital people are really nice, but quite a few aren’t.

My Android phone puts me in the one-third minority among poll respondents.

New poll to your right or here: HIMSS attendees, which of the Big Five inpatient vendors made the best impression last week?

I’m interest in your thoughts about the conference. What were the best and worst parts? 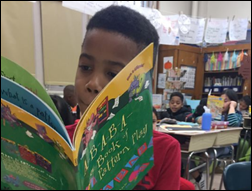 Since I didn’t do a “Weekender” post last week, here’s a DonorsChoose update from Ms. M in New York City, who asked for take-home math tools for her third graders. She reports, “They couldn’t wait to see all the math games. They were even more excited when they found out they were going to be able to take the materials home with them for homework. They are so excited! These materials will help us strength our math skills and prepare us for the state exam coming up. These games will allow my students to review past math chapters in a fun and interesting way. Once again, thank you for the donation!”

A reader complained about too-small images in news posts and I said I would put it to a vote. The choices are as follows.

Use small images (250 pixels wide) for low-detail items like a hospital photo, larger images (350 pixels) for web captures or anything that would be hard to read in the smaller size. Even the large size could be hard to read if the image contains a lot of text (like a dense web page). Examples are below. 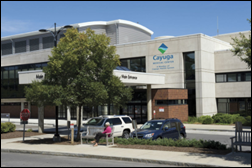 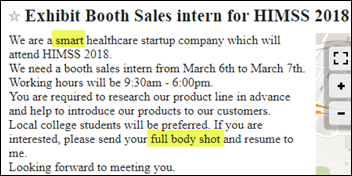 This option involves making the standard size 350 pixels wide in all most cases, even low-detail images such as the hospital example above. The downside is that wider images are also taller, meaning it requires a bit more scrolling to read the entire post. 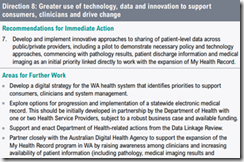 Images would be displayed as a “thumbnail” preview that’s about the same size as the current small image. Clicking the image displays it larger, and the larger size could be much bigger than the current 350 pixels. Downsides: pretty much every image would need to be clicked to view it. You have to page back after reviewing to return to HIStalk. Accidentally hitting the image with your finger on a mobile device takes you out of the HIStalk page.

Vote for your preferred option. 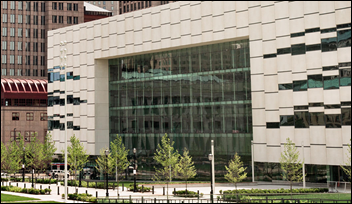 HIMSS extends its lease through 2021 of the top floor at Cleveland’s Global Center. They should get the American Optometric Association on board since the building’s visually jarring design has probably spurred quite a few eye exams.

Pharma bro Martin Shkreli — who had previously boasted that prosecuting attorneys in his securities fraud case were “junior varsity” — cries like a baby before being sentenced to seven years in prison. His own attorney said in his closing statement that while he sometimes wants to comfort his client, “there’s times I want to punch him in the face.” Note that Shkreli was found guilty only of ripping off fellow rich people – ripping off not-rich patients and their insurers by jacking up the price of Daraprim by over 5,000 percent remains perfectly legal and, from a purely business standpoint, admirable.

Odd: a 52-year-old, female New York City EMT is arrested for hitting a hospital employee over the head with a computer tablet following an argument.