The pre-HIMSS madness has started, with companies starting to churn out press releases that try to act very important but don’t actually say much. More than a few vendors save up even the smallest tidbits to try to release them for HIMSS, but miss the fact that their news is just going to get lost in the shuffle. The buzz words are out in full force, so for those of you playing along at home I offer up a HIMSS18 Buzzword Bingo card for your enjoyment: 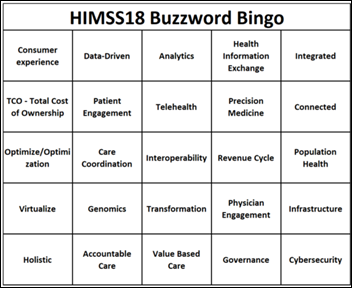 Some vendors are sending out sneak peeks of what will be in their booths, but quite a few others are sending cold-call type emails that are sometimes registering as spam. One arrived today thanking me for my interest in a particular company and asking me to click to verify my email address. It was a mainstream vendor, so I didn’t think a lot about it, but on the other hand, it sounded more like phishing so I decided to take a pass. Vendors need to think twice about the wording in their messaging (or hire public relations people who will think about it) if they want to truly get attention and not be accused of spamming people. 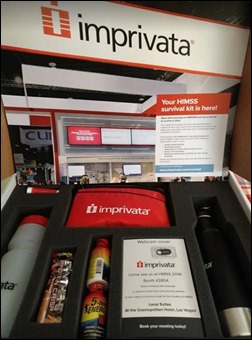 Other vendors are going for the “wow factor,” with Imprivata shipping this HIMSS survival kit. In addition to protein bars and 5-hour energy shots, it has both plastic and metal water bottles, along with lip balm. The red survival kit has tissues, hand sanitizer, vitamin C supplements, and lollipops. The cutest part is the little black trinket stuck above the Imprivata logo – it’s a camera cover for your laptop, that slides to cover or reveal the lens depending on your needs. Usually I keep a piece of tape over my camera, but I’m going to test drive their slider and see how it does. I had some accidental camera exposure on a call several weeks ago, when I had to switch laptops at the last moment. It was one of those “crazy ponytail” days with an unmade hotel bed in the background, and the person I was talking to wondered why I covered my camera abruptly.

CMS announced its Annual Call for Measures for Eligible Hospitals and Critical Access Hospitals participating in Medicare EHR incentive programs. They’re looking for measures to be included for rules that are made during 2019 and would be optional in 2020 and required starting in 2021. CMS is looking for measures that build on Certified EHR Technology and increase interoperability, along with those that might improve program efficiency, effectiveness, and flexibility. Last on their list (although most clinicians might say it should be first) are measures that address patient outcomes and emphasize patient safety.

Much as there is increasing research into distracted driving, I’d like to propose some evaluation in the latter two categories that would look at distracted practicing. It’s increasingly hard to focus on the patient when you’re busy with data gathering, finding the right fields for documentation, and fielding clinical decision support popups. As systems become more sophisticated, I sometimes feel like I’m in the cockpit of a fighter jet rather than trying to care for patients.

CMS is also eager to find measures that would reduce reporting burden, avoid duplication of previous measures, and include an “emerging certified health IT functionality or capability.” It’s sexy to focus on new features, but how about allowing physicians to focus on the technology they already have and learn to use it well? I see numerous physicians who are underusing features such as order sets and clinical decision support, which should be able to drive clinical outcomes, reduce inappropriate ordering, and improve efficiency. They also tend to under use features that would make them not only more efficient but more satisfied with their systems, such as personalization features and individual preferences. Those features take time to set up on the front end but pay dividends on the back end, Shortsighted physicians who skip the pre-work wind up with many more clicks down the road.

Speaking of CMS programs, physicians continue to vote with their feet, not only opting out of the incentive programs, but by opting out of Medicare altogether. Based on data from the Provider Enrollment, Chain and Ownership System (PECOS) as of the end of the year, more than 16,000 physicians have filed affidavits to opt out of Medicare. The number was down in 2017 from a peak of more then 7,000 in 2016, but the overall trend is concerning. I recently received my letter from the Department of Health and Human Services detailing the penalty I’ll be taking this year. Since I’m in an employed situation and my practice isn’t participating in the incentive programs, there’s not much to be done. But if I were back in private practice, I might start thinking twice about CMS participation vs. moving to a practice that doesn’t have a payer-based compensation system. Nearly 40 percent of my residency class is now in practices that are either retainer-based or offer substantial savings through cash-only services. 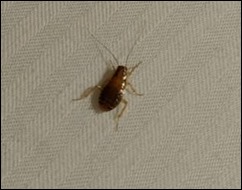 I’m in a no-travel zone leading up to HIMSS, which I desperately need after my most recent travel experience. After a flight that included some turbulence that felt a bit like the prelude to astronaut training, I made it to my hotel and found this little guy in my bed. Fortunately I spied him (or her) right when I came through the door and not after I had gotten settled in. I’m not sure what it is (it seemed too large to be a bed bug and not quite the right shape), but I am waiting to hear back from an entomologist friend. Although the hotel was apologetic (and moved me to a top floor corner suite), it’s unsettling. I’m hoping the only living thing in my room at the Venetian is a CMIO with tired feet, although a plant would be OK too.

What’s the weirdest thing you’ve found in a hotel room? Email me.