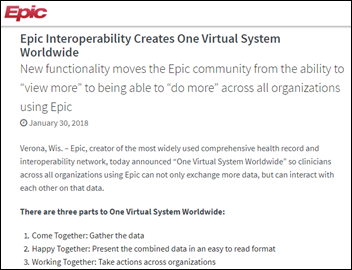 Epic sites using Working Together can:

Future plans include the ability to: (a) check for duplicate imaging and lab orders across sites; and (b) schedule referred patients directly at the new, Epic-using site. 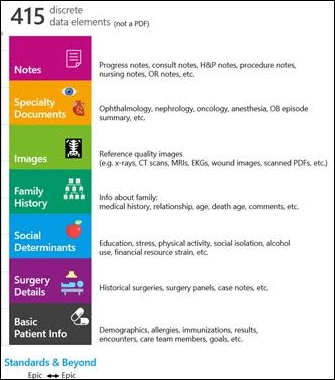 The announcement also notes that Epic sites can exchange 415 discrete data elements vs. the government-required 56.

From Portal Data Download Blues: “Re: patient portals. Apple’s Health Records has drawn attention to patient portal data, but providers and EHR vendors aren’t great at keeping those running despite collecting Meaningful Use dollars. The download function of University of Washington’s MyChart hasn’t been working for weeks. Either it’s not popular or there are too many obstacles to getting the data. Probably both.”

From WorryWart: “Re: hackers demanding bitcoin. Looks like that practice has started without health records. It’s scary to think about emails starting with, ‘We know you have a mental health condition – deposit two bitcoin or we release it.’ Could be the end of bitcoin itself.” The FBI warns of a surge in emails that start with, “I’ve got an order to kill you” but then offer to cancel the hit for $2,800 in bitcoin.

From Potential Voter: “Re: the HISsies awards. How can folks vote?” I directly sent ballots to the 13,000 or so people who have signed up for HIStalk email updates. Those ballots are tied to their email addresses, limiting votes to one per reader in preventing ballot box stuffing (SurveyMonkey is brilliant and — as far as I know, unique — in offering that option inexpensively). Those emails went out Monday night and around 700 ballots have been completed as I write this. So far, the majority’s vote matches my own in 14 of 16 categories.

What do you wish you’d known before bringing an ambulatory EHR live? Take a few seconds to tell me to increase your enjoyment of reading the collective recap later this week.

I’m anxious to load up on Cerner shares and maybe some Adobe given the obvious analytical prowess and overall attention to accuracy by this PhD-claiming editor, who offers on the side his services described as, “Enhance you’re allowing to compose me to edit and alter your archive for the standard linguistic and expressive blunders that we all make.” I shall hazard a guess – supported by a lack of LinkedIn contact information for Dr. Editor – that his American-sounding name wasn’t any more parentally assigned than that of an unintelligible, far-away call center rep claiming to be “Chuck” or “Wayne.”

USA Today’s technology columnist bangs out a quick story, “I tried Apple’s improved Health app. Here’s what I found,” that buries a critical point about his Health Records test drive 15 paragraphs down: “Since none of the 12 health institutions are in my back yard or store my data, I could only go so far in testing the updated app.” Translation: all he did was navigate to the Health Records login screen.

Amazon, Berkshire Hathaway, and JPMorgan will create an independent company to provide healthcare services to their 1.2 million employees that will be “free from profit-making incentives and constraints.” Warren Buffett referred to healthcare in the announcement as “a hungry tapeworm on the American economy,” Amazon’s Jeff Bezos said that “reducing healthcare’s burden on the economy while improving outcomes for employees and their families would be worth the effort,” and JPMorgan Chase CEO Jamie Dimon said the company will create solutions that not only benefit employees, but “potentially, all Americans.” That’s nearly $200 billion of net worth talking. Skeptics note that big businesses have tried and failed in the past to band together to force provider costs down, but healthcare-related stocks still led the market sharply down Tuesday after the announcement. 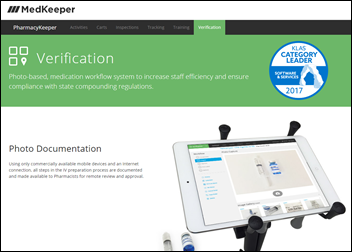 Dell may undertake a reverse merge with publicly traded VMware – of which it already owns 80 percent, gained in its $67 billion merger with EMC in 2015 – to allow Dell to become publicly traded without running a separate IPO. It would be the biggest merger in tech history, allowing Dell’s shareholders to reap the benefits of the merger and helping Dell pay down its $50 billion in debt. VMware’s growth has slowed as customers move from running data centers with virtual servers to cloud-based systems. 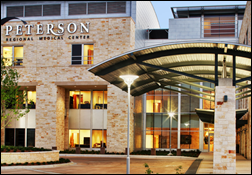 HCR ManorCare will roll out PatientPing’s care coordination platform to its 500 post-acute and long-term care facilities. 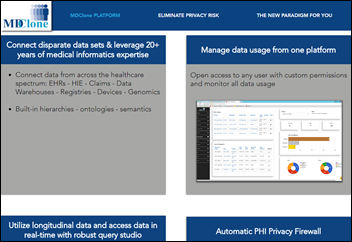 Washington University School of Medicine (MO) signs a partnership agreement with Israel-based MDClone to aggregate research data from BJC HealthCare in the company’s the first deal outside of Israel. The 25-employee MDClone was founded in March 2016 by Ziv Ofek, who started dbMotion and sold it to Allscripts for $235 million in 2013. 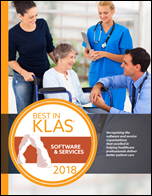 A GAO report to Congress says the US Coast Guard is placing service members at risk because it went back to paper recordkeeping following its attempt at implementing Epic, which consumed seven years and $60 million (not counting internal and external labor costs) before the project was abandoned in October 2015. USCG retired two legacy systems that Epic was supposed to replace, with project’s failure forcing it back to paper and Microsoft Office applications. USCG had implemented the DoD’s old CHCS system in 2002, but decided the cost of moving to AHLTA in 2009 wasn’t worth it and instead signed a $14 million contract for Epic’s ambulatory EHR. It found during implementation (!!) that several other of its legacy systems were outdated, requiring a project expansion to include another 25 vendors at an additional cost of $56 million. GAO analysts found poor project oversight and still-undocumented lessons learned. The GAO recommends that USCG get moving on deciding what it wants to do given that it launched a procurement process in February 2016 and identified its desired solution in October 2017. USCG responded that it plans to award an EHR contract later this fiscal year. USCG’s health division covers 50,000 service members, retirees, and dependents from its 41 clinics and 125 sick bays (easily depressed taxpayers shouldn’t perform the cost-per-member math of yet another bungled government software project). In a follow-up House committee hearing, Rep. Duncan Hunter (R-CA) pressed USCG to “not waste time and money” and simply choose Cerner as did the DoD and VA, but Rear Admiral Michael Haycock says that while that’s an option USCG is considering, more due diligence is needed before signing a contract.

Iowa’s state senate is reviewing a bill filed by the Board of Pharmacy that would make it illegal for providers to hand-write prescriptions, which worries the state’s medical society, which fears that providers won’t be ready by the the July 1, 2019 compliance date. 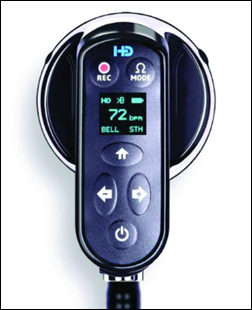 A doctor in Canada is suspended for one month for altering the electronic medical record of a patient after she died, modifying several notes to falsely indicate that the patient had refused treatment recommendations. 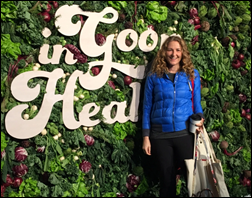 Jen Gunter, MD writes a hilarious, occasionally profane, and brilliantly scathing recap of her undercover attendance at the “In Goop Health” conference run by Gwyneth Paltrow-owned Goop and the out-there medical claims made by its speakers.

I was initially worried they wouldn’t let me register, but some quick homework told me they had offloaded registration to a third party, so I thought it highly unlikely there was a no-fly list. I did consider that I was just full of myself and they just didn’t care about me attending; however, along the way I received a tip that the Goopsters hate me more than gluten, cow’s milk, and McChemicals combined, so I think they just never thought I would go … There were non-toxic manicures that smelled as bad as regular manicures, some weird facial station that involved a mask that looked like an early prototype from “Phantom of the Opera,” and Sonic Womb music … There was a drink that tasted like the inside of a spa. If you actually rinsed down a spa and put the effluent into bottles, this is what it would taste like. There was also charcoal lemonade. It tasted like lemonade. The guy handing it out said it was good for “toxins.” I explained that charcoal was an antidote for poisoning and that it did not bind toxins and that I was toxin-free. He didn’t care. At “In Goop Health, ” the truth is irrelevant and words are meaningless … The actual content started at 10 a.m. GP (her formal name, no one calls her Gwyneth) was the mistress of ceremonies, and for such a seasoned actress, she said “um” a lot. She looked fine, but up close she looks her age, so there is no magic in Goop skin care products. The glowing twenty-something skin on the magazine covers is just the power of Photoshop.

In India, a hospital visitor dies after accompanying an elderly family member to the MRI room while carrying the patient’s oxygen tank, causing the 32-year-old to be sucked into the MRI machine where he was crushed. I’m guessing that someone offers a magnetic or metal-detecting door sensor that won’t allow anyone to enter an MRI room with metal when the machine is turned on.