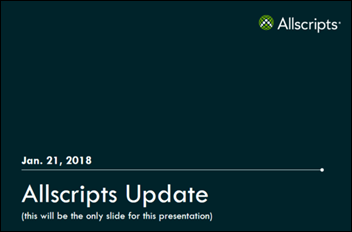 Allscripts hasn’t said how the malware was introduced, but SamSam’s sole method of entry seems to be unpatched installations of JBoss software, for which Red Hat released SamSam-protecting patches nearly two years ago.

I was mildly amused that to listen in on the Web-based Allscripts ransomware update Sunday morning, I had to install the notoriously buggy and unsecure Flash browser plug-in, which took forever to load, suggested adding other crap software, and required a browser restart. The Allscripts folks on the call noted that several participants couldn’t hear the Flash-powered audio and suggested trying Chrome or Firefox instead of IE/Edge. I was appreciating the potential irony of an anxious doctor dreading an EHR-less Monday morning having his or her home PC infected with Flash-enabled malware while listening to a Flash-required malware update.

From Tired of the Greed: “Re: Optum Ventures. Bought several companies in 2017, including Advisory Board, because UnitedHealth Group was making so much money they wanted to put capital in the marketplace. Tax reform gave them a huge windfall that they will not be sharing with employees. Raises remain in the usual 1 to 1.5 percent range with zero bonuses for most of my department. Yet upper and senior management (all male in my division) will get nice bonuses and who knows what kind of raises. This is an old boys’ network lining its pockets and those of its shareholders on the backs of patients and physicians with cooked-up ways to deny paying for legitimate medical care.” My reactions are as follows:

From Party Shoes: “Re: HIStalkapalooza. I read HIStalk religiously every day and haven’t seen the details.” It’s amazing how many people who claim to pore over my every word somehow missed the several times I’ve mentioned that I’m not doing the event this year. TL;DR: no HIStalkapalooza this year.

From Chuck Roast: “Re: HIStalk. I read your email newsletter every day. Good job!” I stopped putting teaser bullets in the email blast for exactly this reason – people were confused into thinking it was a self-contained email newsletter rather than a single link to the real online thing. Other folks haven’t figured out that the daily headlines are in addition to the usual M-W-F full posts and complain about overlap. My advice has never changed – if you don’t check HIStalk each weekday, you are almost certainly missing something I thought was important. Just click the home page link and read down the page until you hit something you’ve already seen. The email link goes directly to that particular article, so you won’t see the other stuff there from that link.

From Bitter Pill: “Re: Amazon and Google in healthcare. How could they possibly fail?” In about a million ways, foremost being the error in seeing healthcare as, like every other industry, being driven by consumers who simply require new technology to further empower them with the threat of taking their business elsewhere. Evidence: if patients were empowered consumers, hospitals wouldn’t offer inconvenient parking, 9-5 weekday hours for non-inpatient services, halls full of roaming providers who aren’t in the patient’s insurance network, next-available appointments running weeks into the future, and inflated but incomprehensible bills. Unlike every other market, healthcare is poorly run and consumer-hostile, but full of entrenched players who can easily steamroll any outsider’s efforts to make it better at their expense.

Of the 81 percent of poll respondents who don’t trust KLAS’s product rankings, half think the company is biased or caters to paying vendors.

New poll to your right or here: is Epic an impediment to innovation as Fairview’s CEO says?

Maybe this isn’t new, but I hadn’t noticed. Signing up for any HIMSS18 pre-conference symposium includes the Pre-Conference Plus benefit. You pay for a particular session, attend its opening keynote, but then are free to move around to other symposia during breaks (it would  be interesting to see which sessions send attendees fleeing for the doors). They all cost $350, so there’s no gaming the system by signing up for the cheapest one and then switching. I also noticed that some conference sessions now list “conference supporters” that HIMSS has convinced to spend even more money, removing yet another safe space for non-vendors trying to evade commercial pitches (you knew that was coming when HIMSS started selling escalator advertising). My brilliant ideas – pay the food court vendors to attach flyers to their $13 chicken Caesars or hire one of those Las Vegas stripper card flippers to further clog the seedy sidewalks. 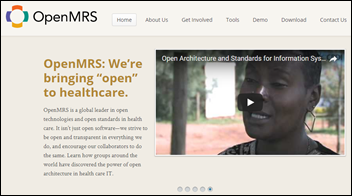 Open source EHR vendor OpenMRS – whose product is used in developing countries – receives a $1 million donation from cryptocurrency philanthropy organization Pineapple Fund (its tagline: “because once you have enough money, money doesn’t matter.”) OpenMRS learned that the person who started that organization had previously  contributed OpenMRS software patches. OpenMRS is a non-profit collaborative led by Regenstrief Institute and Boston-based Partners in Health.