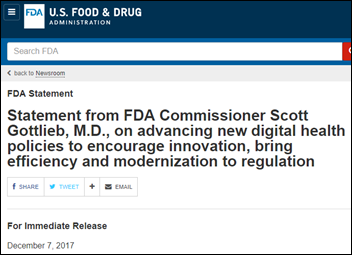 FDA releases three sets of digital health guidance: clinical decision support (draft), reassertion that lifestyle apps will not be treated as medical devices (draft), and how software will be assessed as a medical device (final). 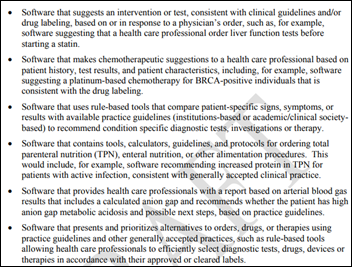 FDA says software isn’t a medical device just because it:

FDA also says it will not enforce its own requirement that electronic patient software be classified as a medical device if it isn’t certified by ONC.

Software that stores, converts, or displays medical images will also be moved to non-device status, but software that analyzes the images will be treated as a medical device.

Software that flags patient results based on specific parameters (such as out-of-range results or opportunities for complementary tests) will not be regulated as a medical device as long as it only performs the same interpretation that the practitioner could do themselves. 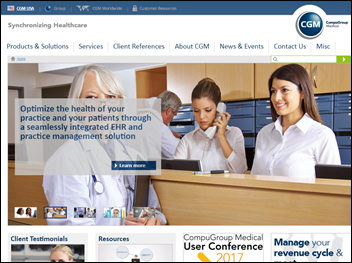 CompuGroup Medical and its US CEO Benedikt Brueckle donated $500 to my DonorsChoose project, which when matched with funds from my anonymous vendor executive and other sources (I found some GREAT matching, as you’ll see, $5 for each $1 in some cases) fully paid for these classroom projects:

Several teachers, including Ms. E, responded almost immediately: “We want to thank you for your warm heart and generosity. I can’t begin to tell you what it means to these kids to have information at their fingertips! They are kind-hearted, sweet, intelligent kids who sometimes just need a little boost and you are a part of them. Again, thank you, and we will send pictures after we get the books. Our classroom is a better place because of your awesome contribution.” 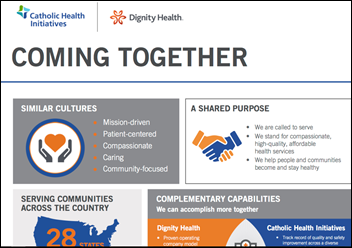 Dignity Health and Catholic Health Initiatives sign a merger agreement that will create the country’s largest health system as measured by operating revenue. The new Catholic health system will have $28 billion in revenue, 139 hospitals, and 159,000 employees, operating in 28 states. The CEOs of each organization will become co-CEOs of the new system. Dignity uses Cerner, while I believe CHI runs a mix of Meditech, Allscripts, Cerner, and Epic. 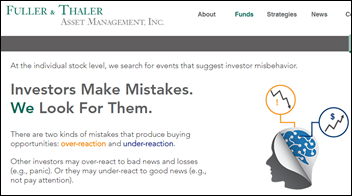 I’m interested that the asset management company co-owned by Nobel-winning economist Richard Thaler – which focuses on shares that are mispriced due to irrational investor psychology – holds 2.8 percent of the outstanding shares of Allscripts, worth around $72 million. MDRX shares are up around 12 percent over the past 12 months (vs. the Nasdaq’s 48 percent) and 30 percent over the past five years (vs. the Nasdaq’s 129 percent). It’s Thaler’s theories rather than his investing acumen that earned him a Nobel — the Fuller & Thaler Behavioral Small-Cap Equity fund has performed consistently worse over several years than the Dow, Nasdaq, and S&P 500.

A Huffington Post article profiles ReHAP, an algorithm-driven system for hospitals to help hospital rehab therapists identify and prioritize patients who need their services. The co-founder is Krishnaj Gourab, MBBS, who is chair and medical director of rehab informatics and analytics at Johns Hopkins Bayview Medical Center (MD). 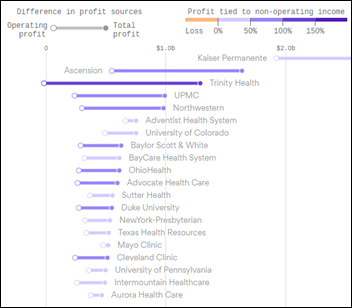 An Axios financial analysis of 84 large health systems finds that while their patient care margins are slim, they’re making a fortune with their Wall Street investments and M&A activity in raising their overall average profit margin to 6.7 percent on their huge revenue volumes, with the article concluding, “Large not-for-profit hospital systems now resemble and act like Fortune 500 companies instead of the charities they were often built as. They consequently hold immense financial and political power.” The analysis unfortunately and rather obviously mixes up “millions” with “billions” in the pop-up graph legends, but commendably provides the raw data as Google Docs spreadsheet. The most profitable health system is Kaiser Permanente at $3.1 billion in FY2016-27 profit, of which 38 percent was generated by its investments. To take the counterpoint, one contributing factor in the success of any charity is to accumulate enough assets to iron out the operational cash flow challenges, although people often get suspicious when those war chests swell and executives take home multi-million dollar salaries. Not to mention that the stock market won’t always perform as well as it has lately. 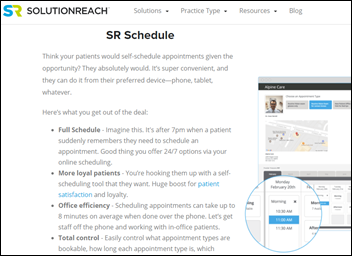 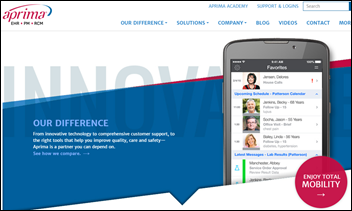 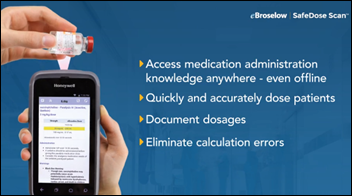 The rate of growth of US healthcare spending slowed in 2016, but still increased by $354 per capita to $10,348 in consuming 17.9 percent of the gross domestic product. 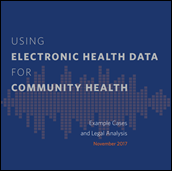 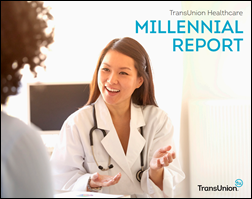 A TransUnion report on Millennials finds that 60 percent don’t understand their health insurance benefits. They also also pay their medical bills more slowly than other generations, mostly because they entered the workforce as lower-income employees just as employers shifted more healthcare payments onto consumers and thus they don’t have the money. The report suggests that providers educate Millennial patients at the point of service, give them an upfront cost estimate when possible, and encourage them to pay at the time of service. 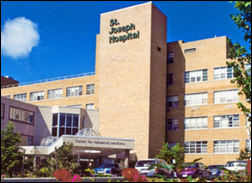 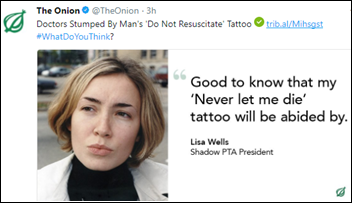 Fun from The Onion.