AWS Re:Invent has become one of the most important technology conferences of the year due to the sheer size of the Amazon Web Services cloud and the rate of technology innovation announced. The influence of the conference on health IT has grown over the years as well.

There was not an industry-shattering Cerner announcement as was rumored in the CNBC article the week prior. Cerner held a session focused on a few interoperability topics that was well received by the deeply technical audience. But nowhere during its session, nor the daily keynotes, was the announcement made. We bumped into a few Cerner individuals at the event who all commented that they are excited about the future capabilities of AWS’s international regions. International expansion is a priority lately across many health IT vendors and it appeared both Cerner and AWS have similar ambitions based on the Cerner conversations we had at the event. 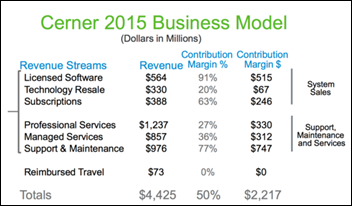 The amount of money Cerner makes on managed services (which can be largely interpreted as hosting) and support and maintenance (which one can presume has a large amount of hosting-related support) dwarfs the company’s revenue from licenses and subscriptions. The international market is the greatest area of growth for its core revenue model, but international data centers are exponentially harder to build and maintain yourself vs. co-location in the US. Cerner has built and maintained its  own data centers nationally.

There are legs to the rumored CNBC story as well as credibility to the other rumors around population health-related partnerships, but the best insight from Re:Invent we can lend is that any rumored partnership is much more about hosting management than it is about APIs or cloud-based data interoperability.

Without question, compliance and security were the two most important topics at the conference. Simply charting the messaging from vendors demonstrates the point: at least twice as many vendors were touting compliance and security management tools, while at least half as many vendors were there to market developer empowerment tools. It’s like the cloud grew up to an enterprise option in the last 12 months.

This is also backed by our observation of the number of C-suite attendees at the event. Supposedly the attendee count jumped from 30,000 last year to 45,000 this year—a number and rumor that was floated often throughout the conference. If true, from our vantage point, the 15,000-person increase was a major jump in “suits” who were there to evaluate how to make this cloud thing work rather than developers who are already leveraging the cloud for projects.

As such, compliance and security was the buzz amongst serious enterprise and healthcare buyers, while the general zeitgeist amongst developers was machine learning and artificial intelligence. But, as we all know, health IT is always woefully behind!

HIPAA, HITRUST, GDPR, GxP, FedRamp, and others were the topics we continuously heard discussed. Interestingly, there are so few options to help truly manage these complex compliance frameworks on AWS. Ultimately, the sentiment we gathered across the healthcare landscape is no one is really helping, especially with HITRUST, GxP, or GDPR. No one had a true GDPR message or product. (Datica will be GDPR ready in Q1 2018.)

John Moore from Chilmark Research once told us that he goes to Health 2.0 to see what’s going to happen and HIMSS to see what’s already happened. Re:Invent has similar characteristics as Health 2.0.

The pace of innovation and accessibility to digital health developers is so fast that the products and changes to health IT are going to become ever more rapid despite the industry’s best efforts to slow it down. The sense that the AI revolution is just around the corner was one of the strongest observations from Re:Invent. That more AI tooling is being made available to health IT developers on AWS’s cloud means that better products more adeptly addressing patient care and reducing costs are going to come at an ever faster pace. It’s going to be an interesting next few years.