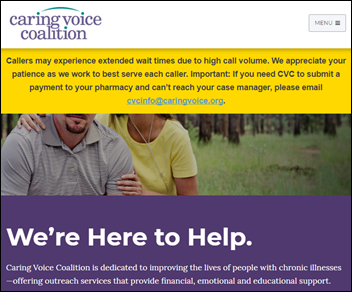 HHS OIG cracks down on drug co-pay charity Caring Voice Coalition, removing its seal of approval after finding that the charity shares data with the drug companies that provide its support.

CVC, which has received hundreds of millions of dollars from drug companies earmarked for paying patient prescription co-pays, had been exposed by several former employees as fast-tracking assistance for patients that use a donor company’s drug while wait-listing those who are prescribed drugs sold by non-donors.

OIG says the information sent to the drug companies could help them raise Medicare prices by accumulating anecdotal patient-reported successes.

CVC told OIG that it will probably shut down following the ruling.

The Justice Department had previously sent subpoenas to a handful of drug companies in its investigation of patient assistance programs, after which United Therapeutics set aside $210 million in case it gets caught up in a False Claims Act lawsuit over its donations.

The Internal Revenue Service is reviewing the tax-exempt status of another patient assistance program, Chronic Disease Fund (now known as Good Days), which took in more than $1 billion of drug company money over six years, of which the charity used $35 million to pay for data processing services provided by a company owned by the charity’s founder. Good Days has filed eight lawsuits so far this year to fight IRS subpoenas. 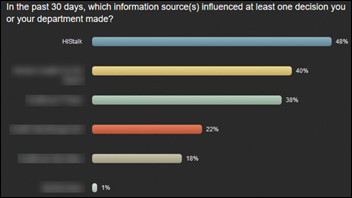 From Dollar Bill: “Re: [site name omitted.] Who finds actionable information there?” I can’t say, but the above is from Reaction Data’s independent C-level survey that asked about which sites influenced their decisions. I’ve blurred the names, but the one you’re asking about finished poorly in this and the other four categories (most-read, most-influential, most interest-generating, most positively affecting job performance, and most recommended). I immodestly note that the winner in all categories was a spare-bedroom, one-author one.

Nuance announces Q4 results: revenue down 8 percent, adjusted EPS $0.20 vs. $0.31, beating analyst estimates for both and sending shares up to extend a run that started in mid-November. The company says its June malware attack cost it $53 million in revenue for the quarter. NUAN shares have risen 4 percent in the past year vs. the Nasdaq’s 30 percent. From the earnings call:

Siemens will take its Siemens Healthineers healthcare business public in Germany at a valuation of $47 billion, the country’s largest IPO in 20 years. The company chose the German exchange after ruling out London due to Brexit and the US markets because it wants to appeal to investors from Asia. 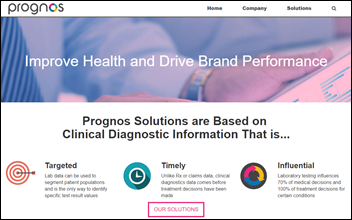 Bizarre: three-employee medical translation training vendor MiTio files for a $10 million IPO despite having only ever enrolled 1,000 students, naming as its CFO/CIO/CTO the founder’s 16-year-old son who is “a rising star in the coding community.” The company says it won’t sell shares publicly,  but had to file for an IPO because it will give investors cryptocurrency tokens. That’s the second company I’ve seen today offering that form of investment (see the Health Wizz item below). I admit that I don’t understand that concept.

The Ministry of Health of the Republic of Kazakhstan will implement Elsevier’s ClinicalKey reference solution in 200 locations.

Nuance hires Tom Beaudoin (SimpliVity) as EVP of business transformation. He was EVP/CFO for Nuance from 2008 to 2015.

The VA misses its target date to sign with Cerner, which it originally vowed to get done in November in responding to a lawsuit protesting its no-bid selection. A VA source says the contract is ready to sign as soon as Congress approves moving the money to the correct accounts. 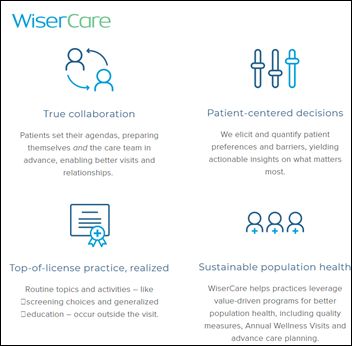 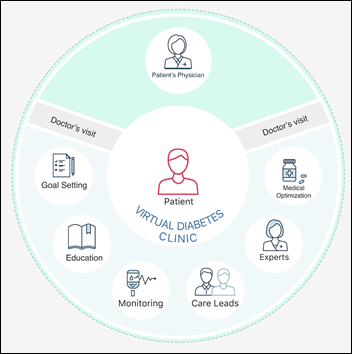 Glytec’s Glucommander Outpatient will be integrated with the virtual diabetes clinic of Onduo, whose parent companies are drug manufacturer Sanofi and Alphabet’s Verily. 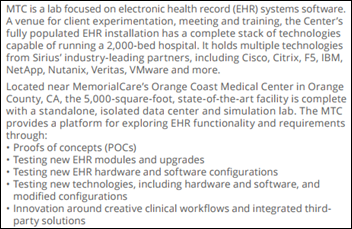 MemorialCare (CA) opens a technology testing and training center in conjunction with systems integrator Sirius Computer Solutions. It includes the technologies need to run a 2,000-bed hospital, an isolated data center, and a simulation lab.

Health Wizz launches a blockchain-powered consumer tool for managing and sharing their medical data with research organizations and drug companies that can offer to pay them. The company is recruiting investors who will receive digital tokens. 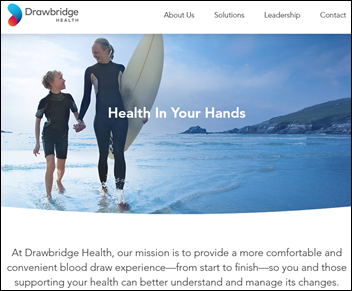 GE launches blood collection firm Drawbridge Health, which will allow physician offices and clinics that don’t have a blood draw technician to easily draw small-volume blood samples and send them to third-party labs. I like the idea of going back to the good old days when you could get your blood drawn during your office visit instead of starting over with the DMV-level indifferent employees of Quest or LabCorp and then listening to your NPO stomach grumble while watching the Unemployment TV Network of fake judges, on-cue fistfights over infidelity, and ambulance-chaser commercials. 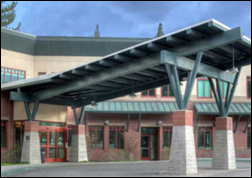 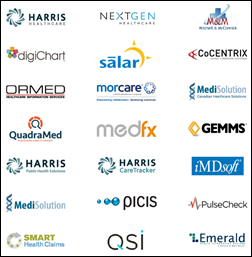 QuadraMed and Harris Healthcare launch individual websites that cover their respective products, with QuadraMed offering its EMPI solutions and Harris Healthcare covering Affinity Patient Self-Service, Affinity ERP, AcuityPlus staffing, Team Notes, the QCPR EHR, and Affinity RCM. The Harris Health Group brands are listed above, although it should be noted that it acquired only the hospital division of NextGen and not the entire NextGen Healthcare product line or its parent company Quality Systems, whose logos appear on the page. 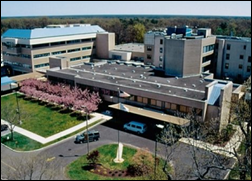 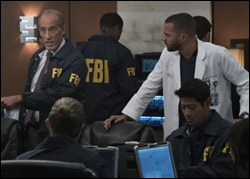 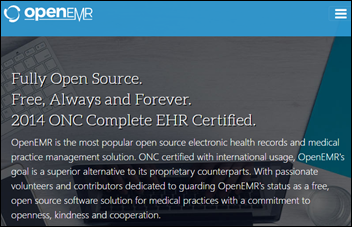 Security researchers find that the installation script of free, web-based OpenEMR does not automatically remove itself upon completion and that the instructions don’t tell users to delete it, allowing hackers to gain administrative access and to execute PHP scripts of their own. Kudos to the developers, who released a patch within four days, made a community announcement about the vulnerability, and updated its instructions to include removing unnecessary files after installation. The system is used by thousands of healthcare facilities and users in supporting an estimated 90 million patients.

In England, a financial administrator who was worried that she was being out-earned by co-workers hacks into the hospital’s systems, looks up salaries, collects data on celebrity mental health patients, and deletes key files. The judge let her off with a suspended sentence since she argued that her deeds were to “ease her mind” rather than for financial gain.

A federal court drops child pornography charges against a California oncologist after his attorney argues that the warrant used to search his home – in which child pornography was apparently found – was invalid because the FBI’s tip from a Best Buy technician was triggered by a photo of a naked girl that was not pornography but rather “child erotica,” which is not illegal but may not be the kind of image you hope your oncologist is studying intently. 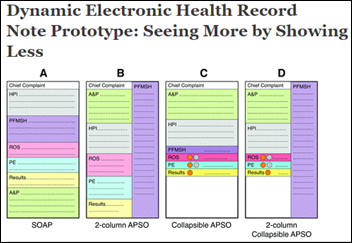 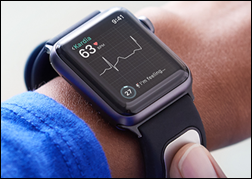 FDA approves AliveCor’s EKG watchband replacement for the Apple Watch to warn users of possible atrial fibrillation. The KardiaBand use what it claims is AI on the smart watch to determine a specific user’s normal heart rate based on activity, then issue a warning to run the EKG function if the rate goes outside the normal range. The band costs $199 plus a $100 per year subscription. Like other “advances” that find previously undetected conditions that require expensive treatment, we’re all going to be paying for it. Going problem fishing by using data for bait isn’t usually as good for patients as it seems. 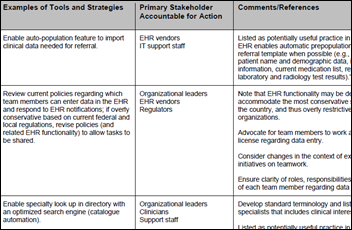 IHI/NPSF publishes “Closing the Loop: A Guide to Safer Ambulatory Referrals in the EHR Era.” Recommendations include developing better interoperability among EHRs used by PCPs and specialists; conducting a risk assessment of the electronic referral process using the SAFER guidelines; creating collaborative care agreements for PCPs and specialists that include how patients will be managed and communications etiquette; and developing easy ways to track referral status by patient. The impressively credentialed expert panel notes that 24 percent of malpractice claims are caused by missed or delayed diagnosis; the volume of referrals has skyrocketed and more frequently involves multiple specialists; and that patients don’t follow through on up to half of referrals. The study also observes that while EHRs have potential to improve the referral situation, they generate a lot of ignored noise and a lack of evidence-based guidelines makes it tougher. 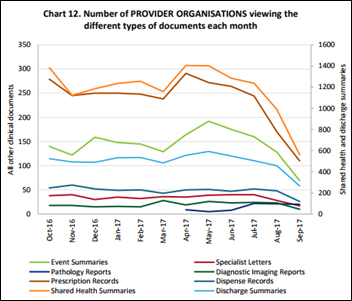 Australia’s My Health Record – rollout of which cost up to $1.5 billion with annual costs of up to $300 million — is being roundly ignored by both providers and consumers, according to the government’s dashboard that shows few new voluntary registrations and that only 200 doctor-entered patient summaries were viewed by hospitals in August.

Big health systems keep moaning about how financially strapped they are and brag about how they’re moving away from the lucrative “heads in the beds” financial model, but Ohio State University joins a bunch of other health systems that have recently announcing huge construction projects. The cost of their much-anticipated erection – which includes an impressive 840-bed tower – has not been determined.

A study estimates that healthcare illiteracy – which includes half of Americans, according to the CDC – costs the country up to $175 billion per year.

Snapchat CEO Evan Spiegel says the factors that have driven social media – more friends, more likes, and more free content – will undermine it. He says that automated, personalized newsfeeds based on what friends are consuming — like Facebook’s — “came at a huge cost to facts, our minds, and the entire media industry.” 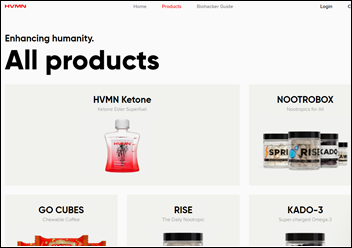 Weird News Andy will love this. A startup that raised millions to develop its $40-a-bottle “cognitive enhancement” concentration pill (aka “nootropics”) tries to bury the results of its own study, which conclude that the expensive product is less effective than just drinking a cup of coffee.