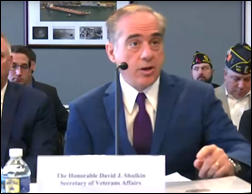 VA Secretary David Shulkin, MD asks Congress to move $782 million from its 2018 appropriations to get its Cerner implementation underway, starting with an immediate $374 million in reprogramming since that’s the maximum that can be moved in the short term. 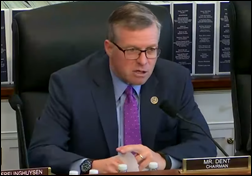 Committee chair Charlie Dent (R-PA) and ranking member Deborah Wasserman Schultz (D-FL) opened the session by expressing their frustration with previous VA-DoD interoperability efforts, the failure of the VA and DoD to follow the previous directives of Congress to create a single system, and their skepticism that the Cerner project will run as smoothly as the VA is assuring.

Some comments from Wednesday’s session: 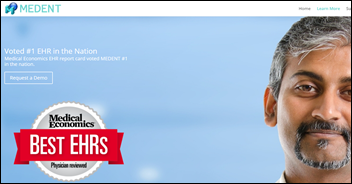 From Winter Rye: “Re: Medent sale. I’ve never understood its reach despite the apparently success of its family and 8,000 reported deployments. The resignation of the son-of-the-father CEO may be telling that other family members want to sell after the father / founder died earlier this year. Potential buyers?” The family seems to be angrily split on selling the 260-employee EHR/PM vendor, which is based in Auburn, NY. It claims 8,000 physician users, with ONC placing it at #13 on the Medicare EHR Incentive Program most-attested vendor list with just under 4,000 EPs. It’s not the best environment to be selling an ambulatory EHR vendor given that segment’s consolidation, but it’s all about the asking price and the acquirer’s confidence of either maintaining the revenue stream or converting users to their own product (the former is much more likely than the latter). The worst thing that could happen is that the family members can’t agree whether to sell and the product languishes amidst the bickering. 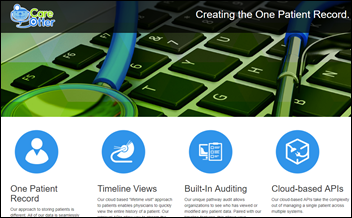 From Allscripts Curious: “Re: the new Allscripts ambulatory EHR showcased at MGMA. Anyone seen it and have feedback? It claims to offer cloud hosting, usability, interoperability, mobility, and embedded AI, but management was short on details.” I’m interested as well. I assume this is the Allscripts Care Otter project, which after I mentioned it via a reader’s tip in August wondering why it wasn’t ready to be shown at ACE, all online traces of the project were immediately taken down. This reminds me of why I’m skeptical when vendors suddenly claim to have embedded the oh-so-trendy AI in their products, leading me to wonder exactly what that means beyond the usual hard-coded programming logic (the real definition of AI is that the system simulates human intelligence in applying what it learns to complete new tasks, which sounds kind of unlikely for an EHR).

From Nice Hat: “Re: patient access technology. What does that mean, exactly?” It’s less noble than it sounds, usually referring to technology that increases the number of profitable patients that can be cranked through the system.

Thanks to Healthfinch, which has upgraded its HIStalk sponsorship to Platinum level.

At least 50 percent of the usage of the possessive “its” that I’ve seen lately incorrectly spelled the word as “it’s,” raising the near-certain likelihood that dictionaries will start listing the misspelling as acceptable in their self-assigned role of being descriptive rather than prescriptive.

Here’s the video recording of this week’s webinar titled “How Hospitals and Practices Can Respond to Consumerism by Better Engaging Patients Through Price Transparency and Payment Options.” 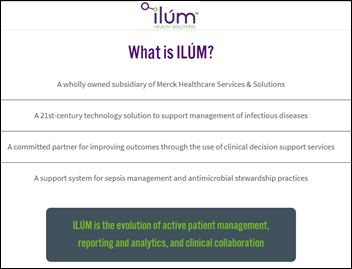 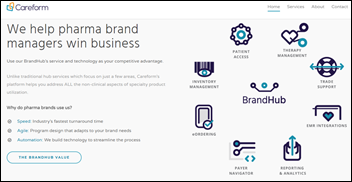 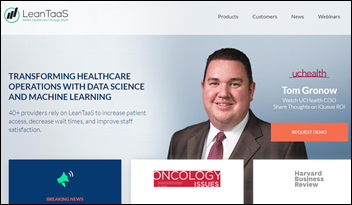 Hospital and infusion center scheduling system vendor LeanTaaS raises $26 million in a Series B funding round, increasing its total to $39 million. 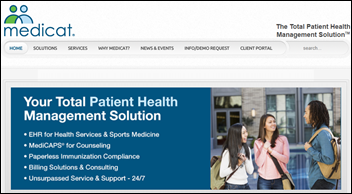 Banyan Software acquires Atlanta-based student health EHR vendor Medicat. I was puzzled why the company that developed the Vines networking system would buy an EHR vendor, not realizing that Banyan Systems has been defunct for nearly 20 years. 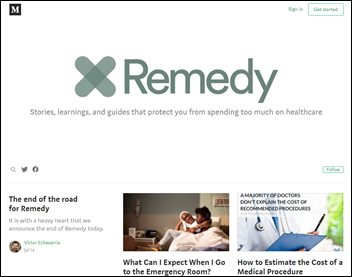 Fast Company profiles Remedy, a shuttered startup that used technology and human billing experts to help people get their incorrect medical bills fixed. The company says hospitals, practices, and insurers wouldn’t cooperate by giving it access to the billing records of their customers, saying in its goodbye message, “Until the industry begins respecting the rights people have to their own information, it will remain difficult for individuals and their agents to be vigilant against baseless medical bill overcharges.” The article acknowledges that perhaps the company should have done more due diligence before placing investor bets on external data access, but adds that the company’s billing subcontractors were buried in paperwork as hospitals and practices required completing manual forms, lost the submitted forms so they had to be completed again, and incorrectly told them that HIPAA made it illegal to work with the company. 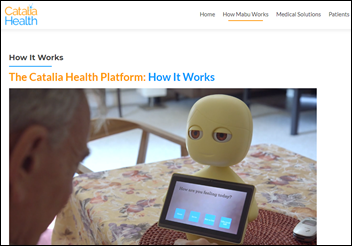 AI-powered patient engagement platform vendor Catalia Health raises $4 million in a pre-Series A round, increasing its total to $7.75 million. The company offers Mabu, a supposedly human-like conversational companion whose robotic voice is about as un-human as it can be, making that a good place to spend some of the new windfall. 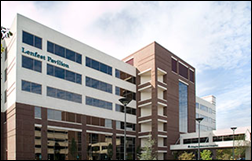 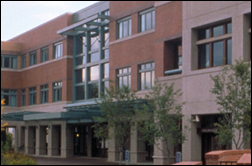 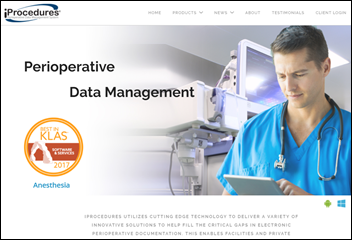 In Australia, Royal Adelaide Health chooses the anesthesia information system of Florida-based IProcedures as part of its Allscripts contract. 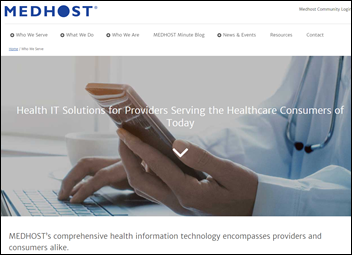 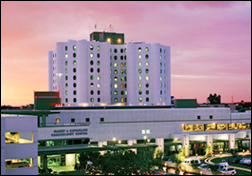 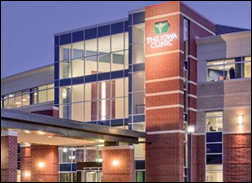 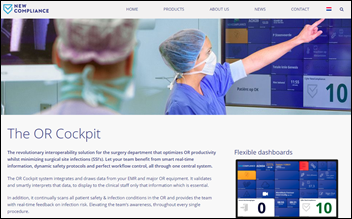 The local paper covers the first US deployment of Netherlands-developed, infection prevention-focused OR Cockpit at Ocean Springs Hospital (MS).

Philips and Nuance will bring AI-based image interpretation and reporting capabilities to radiologists in integrating their respective Illumeo and PowerScribe 360 products.

NextGen adds the IMO Problem IT Terminology diagnosis entry tool by Intelligent Medical Objects to the mobile workflow solution that was part of NextGen’s acquisition of Entrada earlier this year.

In Canada, Canada Health Infoway and OntarioMD will align the privacy and security components of their respective EHR certification programs.

An “internal network infrastructure issue” leaves CVS Pharmacy unable to process prescription refills. Annoyed Twitter users dispute the company’s claim that new prescriptions are being filled normally, saying that the multi-day outage has disrupted all CVS prescription activity and has caused store personnel to suggest they head over to Walgreens.

CHIME suspends its highly publicized, $1 million prize National Patient ID Challenge after two years, saying “a new approach is warranted” with no good solutions found and admitting that “we cannot do this alone.” CHIME President and CEO Russ Branzell also notes that Congress may soften its stance on prohibiting HHS from creating a national patient identifier. CHIME says it will bring together key stakeholders to find a national solution that identifies people with 100 percent accuracy (its million dollars would be safe there for sure).

A woman sues EClinicalWorks for $999 million, hoping to attain class action status in claiming that her husband died because ECW’s EHR left him “unable to determine reliably when his first symptoms of cancer appeared in that his medical records failed to accurately display his medical history on progress notes” without really describing what happened. The complaint cites the certification issues that were listed in ECW’s settlement with the Department of Justice. 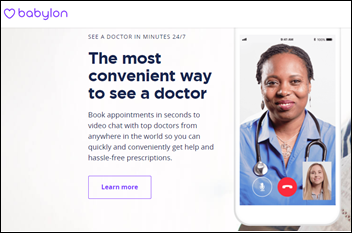 In England, a physician’s op-ed piece complains that a private telemedicine provider is advertising itself as a replacement for seeing GPs while excluding more complex patients, thus cherry-picking the easiest ones and threatening GP practices that are paid a fixed $200 per patient per year in which the healthy subsidize the sick. The yearly fees are transferred to telemedicine provider Babylon when a patient signs up for an online visit. The author says his practice can’t provide services to truly ill patients if telemedicine providers skim off the profitable ones:

But while anyone can join its service, the website says it may not be suitable for “complex mental health problems or complex physical, psychological or social needs.” Or if you’re pregnant or older and frail, and as long as you don’t have dementia or learning difficulties or safeguarding issues … We cannot refuse to register patients or advise them to register elsewhere based on age, gender, or disability. If my surgery put a list on its website telling the most ill people in our catchment area we weren’t suitable for them, NHS England would serve us a breach of contract notice and could close us down. 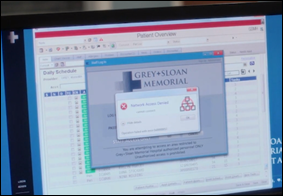 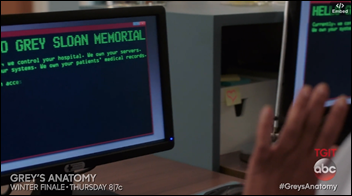 I mentioned that Thursday night’s “Grey’s Anatomy” winter finale involves a hospital cyberattack, with a sneak preview showing that it’s ransomware. It’s a pretty realistic EHR screen and “Tim from IT” gets a fun line before his day is wrecked in cutting off the nurse’s description of the problem by asking her if she’s tried turning the computer off and back on. Hollywood loves playing sounds when text displays on a screen like a teletype and did so here, which might be desirable for ransomware but not otherwise. The hacker appears to be demanding 4,932 bitcoin, making the ransom at bit steep at $38 million.