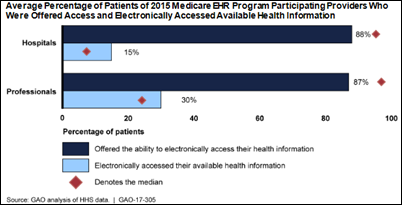 A GAO report says HHS should investigate why few patients access their electronic medical information even though 90+ percent of hospitals and practices claim to offer such access.

The report suggests that patient portals are the most common method by which patients look up their information, most commonly that of the provider’s EHR vendor. The report notes the limitations of portals:

The report suggests that providers provide portal brochures, promote the portal during each interaction, make computers available in the hospital or practice, send reminder emails, reward clinical staff, or offer patients prizes or discounts for using the portal.

From Inquiring Mind: “Re: Soffet. We’re converting to Cerner Patient Accounting and the reference site mentioned a product called Cerner Charge Integrity from Soffet. We’ve searched HIStalk and haven’t found it. Where can I find this mythical company and product?” Some pretty impressive Googling (if I do say so myself) turned up Softek Solutions, which offers EHR performance and revenue integrity solutions for Cerner sites. 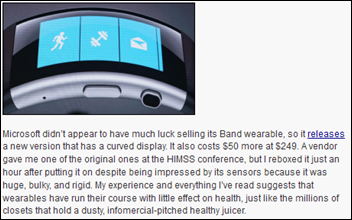 From Shoulda Shorted: “Re: fitness trackers. You wrote in 2015 that fitness trackers had run their course. I sent that comment to my broker when Fitbit was trading at $35, but I should have also shorted shares – they are now at $6.” I also now see that Microsoft has killed off its poorly designed Band tracker that I had panned after trying it, with its demise going unnoticed due to indifference. My take today: the only fitness tracker that will ever be consistently used will be built into your phone, with any required sensors being effortless and invisible. Nobody wants to wander around like Dick Tracy with a big old gadget on their wrist or risk embarrassment after missing a fad shift in still wearing one of those once-ubiquitous but now-defunct Livestrong yellow rubber bands. My weekend poll might ask how many trackers you’ve owned and whether you still use one (my early 2014 survey found that 37 percent of respondents claimed to use their tracker at least five days per week, “use” being loosely defined). The early-market churn as companies rushed supposedly improved products to market and convinced consumers to change brands created the illusion of ongoing demand, but there’s only so much to be gain health-wise by counting steps and most Americans don’t really want to take a lot of steps anyway. At least you can hang clothes from unused treadmills. 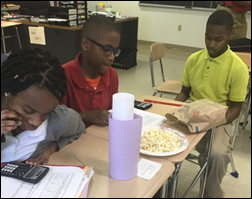 Readers funded the DonorsChoose grant request of Ms. H in Indiana, whose seventh graders are using the scientific calculators we provided to perform complex experiments in calculating the volume of cylinders using popcorn. 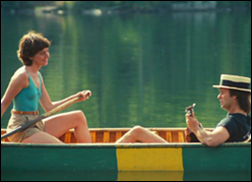 Lorre’s post-HIMSS specials for new sponsors of the site and of webinars ends when March does, so interested companies have a couple of weeks to speak up before we slack off during those lazy, hazy, crazy days of summer.

I was reading a questionably authoritative article that proclaimed that data centers will be obsolete within five years because of the cloud. I think they missed the fact that data centers aren’t going away – they’re just being centralized. What has changed is ownership and the length of the cord attaching the end user. As I often say, the cloud is just someone else’s computer, although that’s a flip response if a vendor really offers a “cloud” – a pool of interchangeable, commodity servers that are physically touched only when installed and discarded and that are managed collectively, spun up quickly via software, scalable, and are sold as a metered service. It would be interesting to know which health IT vendors are truly operating in this type of cloud vs. just parking the same old server in their own building instead of one owned by the customer. And speaking of Dilbert (which I wasn’t, except to include the strip above), Scott Adams is putting together a list of startups that could lower healthcare costs and is seeking submissions in case you work for one of those.

Listening: new from Norway-based but American-sounding Beachheads, jangly, hook-laden power pop that defies your toes to stop tapping even with a pleasant soupcon of the punkish minor chords that I require.

CareDox, which offers a free EHR for K-12 public schools, raises $6.4 million in a Series A funding round, increasing its total to $13.5 million. The company is vague about how it makes money, but it appears to sell de-identified student information and to send care reminder-type advertising messages to parents. 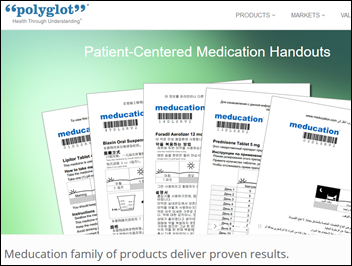 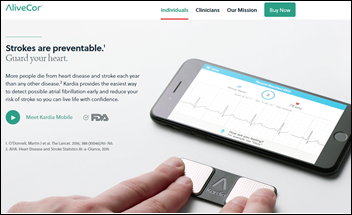 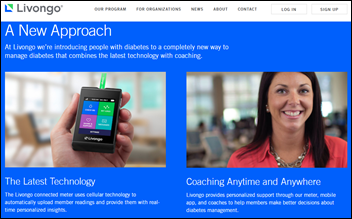 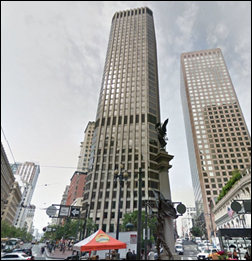 McKesson is rumored to be selling its San Francisco headquarters building for $300 million. The company previously announced plans to sell and then lease back the 38-story building. 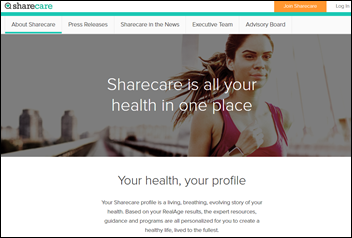 Mayo Clinic says that its tighter margins have forced it to start giving appointment priority to privately insured patients over those covered by Medicare and Medicaid. Mayo had a $475 million profit in 2016. What’s most surprising is that Mayo announced publicly what most health systems do privately – market to those with private insurance and, all things being equal, give them smoother passage through the system without affecting clinical outcomes. Perhaps there’s a market for a targeted patient dissatisfaction program to keep the low-paying customers away without actually banning them. 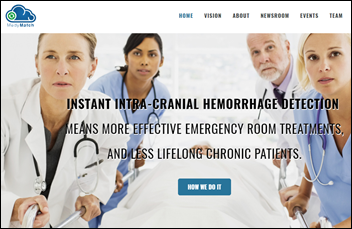 The White House’s budget proposal, which would cut NIH funding by 19 percent, would also move HHS’s AHRQ into the National Institutes of Health. 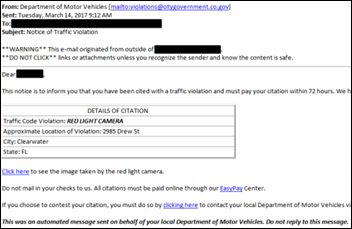 A phishing employee awareness test by BayCare Health System (FL) creates headaches for the tax collector’s office when appropriately wary workers call to verify the phony government-looking email. The health system expected unsuspecting employees to click on links as the email instructed, which would have automatically presented them with a lesson on why their actions were inappropriate.

A second Dallas death is attributed to a “ghost call” problem in which 911 callers can’t get through because the lines are overloaded by calls from T-Mobile cell users who didn’t actually dial 911. The Dallas-only problem seems happen when someone completes a 911 call, then sometime later the cell service thinks the call didn’t go through and tries again. The city admits that a six-month-old died while his babysitter was on hold with 911 for 30 minutes last week, with records indicating that 360 callers were waiting on hold at one point in the day.

A federal judge dismisses a lawsuit brought against Amtrak by Temple University Hospital that demanded payment of $1.63 million for treating a passenger injured in a May 2015 derailment. The passenger was covered by Medicare but the hospital didn’t submit its claim in time to collect the $269,000 that Medicare would have paid. 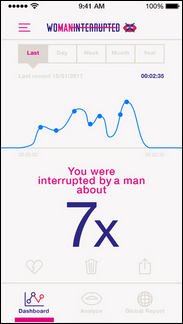 I mentioned last time that a new app measures the percentage of time men vs. women speak in a meeting, but here’s one I like better. Woman Interrupted allows measurement of “manterruption,” when a male interrupts a female who is speaking. I’m sympathetic since there’s nothing that drives me crazier (and often into pouty silence) than when someone of either gender repeatedly interrupts me, either in a one-to-one or group setting. It’s usually one of two extreme personality types: (a) an egotist (often the highest-ranking person in a meeting) who thinks they possess super-human insight into what needs to be said; or (b) someone so lacking in self-confidence that they have to talk over someone else to feel validated. I’m pretty sure those interrupters hate being interrupted themselves (since everybody does), so I always wonder if I should just say, “I’m going to leave now since you’ve turned our dialog into monolog and thus rendered my presence superfluous.” For the app, I suggest a Nuance-powered enterprise version that maintains speech profiles on every employee so it can provide a meeting recap indicating: (a) how much time each person talked; (b) how many times they interrupted someone or were interrupted themselves; and (c) who the primary interrupters are on the rudeness leaderboard. Perhaps it could also record which ideas each person argued for or against and then reconvene the groups six months later to see whose thoughts most closely aligned with the eventual reality and then automatically remove the chatty but wrong ones from future invitations.