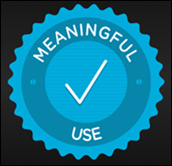 Many organizations are starting to get ready for their Meaningful Use attestations early next year. Those that prepared well in advance and monitored their performance as the year rolled along are simply dotting the proverbial “i” and crossing the “t” before the year closes out. Others are in panic mode, realizing that they waited too long to get serious about it, or failed to follow up. I was contacted recently by a couple of clients that fell into the latter category, and was sorry to have to tell them that there isn’t a lot that I can do to help them.

One group started the year strong, using their EHR’s quality measures dashboard to make sure providers were posting solid metrics for their identified measures. They provided retraining for the end users as needed, making sure documentation was done using as much discrete data as possible. They were headed strong into May, and then had some changes in their office dynamics that resulted in the loss of some key staffers. The new office manager was tasked with picking up the Meaningful Use readiness work, and there is some debate about whether she simply didn’t do it or whether she told one of the partners that she was too overwhelmed to take it on.

Practice leadership realized about a month ago that they hadn’t been seeing any reports, and hired a new resource to start managing things. It took her several weeks to get up to speed, and even then it seems that it was too little, too late. Many of the providers have slipped back into documenting their visits using free text and dictation, and based on how the system reports, they aren’t getting credit for their documentation. The managing partner reached out to me asking for my firm to completely take things over for the rest of the year. I was willing to give it a go, until he demanded that I assure him that his providers would meet certain numbers on the metrics. Without a magic wand or a time machine, it would be pretty impossible to correct that much missed documentation, so I elected to take a pass.

Another client had a supposedly savvy IT person who was modifying patient visit data on the backside of the system. He would take the providers’ visits, and if there was free text documentation that kept the visit from qualifying for certain metrics, he would perform database inserts to trigger the discrete data points. That might be a valid approach as long as there is solid documentation on what is being done and clear boundaries around it, but they failed to document the plan or the authorization. Now the physicians are in a battle about having people modify their charge without approval of the individual visits, and it’s probably going to tear the practice apart. They wanted me to come in and audit the database and see how widespread the modifications are, but given the state of the practice, there isn’t enough money on the table for me to get into the middle of something like that.

These examples illustrate, in part, a major issue that we’re still seeing in healthcare IT. Far too many providers and organizations still think that these types of projects are technology projects. I hear a lot of nebulous references to “the IT department” owning such initiatives when really they are clinical/operational initiatives with IT support. There’s also a lot of blame on the EHR vendors. Although I’ve definitely seen my share of flawed workflows, strange workarounds, and oddly calculating measures, clients have to realize that unless they’re willing to switch systems, they have to work with what they have in front of them. Of course, they should also open tickets or support cases or use whatever complaint mechanism their vendor provides, but at some level the customer is responsible for selecting or staying with a particular vendor.

When physicians push back against my assertion that they need to own these projects along with their practice operational leaders, I ask them if they would assume that the company that manufactured the fax machine or the person who dialed it is responsible for the information written in the letter they’re sending to their consulting or referring physician. (Don’t get me started on the fax machine analogy. It’s sad that I have to use it, but so many offices are still faxing letters back and forth that it’s an effective way to make the point.)

It’s now December, and there are somewhere around 17 or 20 work days left in the year for most practices, depending on how you handle your holidays. If you’ve been asleep at the quality measures wheel for most of the year, there is virtually no way to make it up before the attestation window closes, unless you’re willing to engage in database shenanigans or know someone who will on your behalf. You’re not going to be able to retrain providers to fix their workflows for this year, but you can start educating them on what they need to do differently for 2017. And hopefully those organizations who are in a bind at the moment have realized what they too need to do differently for next year, if they want to be successful.

Whether you look at it as succeeding in a world of changing payment structures or avoiding penalties or complying with the requirements of your employer, staying ahead of quality reporting requires a lot of work. Providers have to be constantly monitored for compliance with recommended workflows. End users have to be educated on ways to support the providers so they don’t become data entry clerks. Practice managers and administrators need to be running reports regularly and taking action to mitigate issues as soon as they identify them.

Leadership should be careful on how often they run reports though and what results they expect – I had one client who was running them twice a week, and complaining that they weren’t improving. We had to have a lengthy conversation about interventions and how long they take to bear fruit, since it’s nearly impossible to change provider or end user behavior overnight. That’s also assuming that you actually reached the providers with the intervention, and that half of them weren’t in the operating room or missing it because they were rounding or not reading their email. Even with significant incentives or penalties, it’s still going to take several weeks (if not months) for new workflows to become part of daily routines.

Managing quality metrics is definitely more of a marathon than a sprint. How is your group doing with MU attestation preparation? Email me.