From JB: “Re: data blocking. A Politico piece claims Epic and EClinicalWorks are impeding the sharing of data with public and specialty registries. It’s surprising that EMR suppliers aren’t going full-tilt toward open practices given regulatory pressures and pending VA procurement.” Epic says it has a problem with the for-profit companies behind medical association registries that also sell analytics software and apparently patient data. Epic and Practice Fusion say they will submit CCDs, but registry companies complain that CCDs don’t include all the information they need and a fully automated process would require EHR vendor customization. As is always the case, the patient is excluded from the vendor-vendor bickering even though the data in question (although not necessarily the benefit from its use) is theirs. The largely overlooked open.epic.com lists the public health registries to which Epic offers standard integration. There’s also the question of whether specific EHR vendors don’t allow submission of data at all (which is apparently sometimes true in Epic’s case) or simply charge EHR users extra to do so (like EClinicalWorks). Epic is the crown jewel since its refusal to participate means that large academic and government projects (including the FDA’s planned medical device monitoring program) are missing the information of the largest health systems. A point to note: correctly or not, I’ve never seen Cerner mentioned even once as a problem – it’s nearly always Epic and EClinicalWorks that come up, such as in the AMA’s proposed policies to be discussed in its upcoming meeting that call out those vendors specifically (see above). 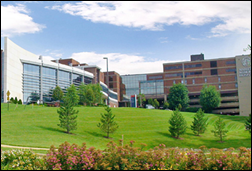 From David Watson: “Re: Memorial Health System in southeastern Ohio. We have deployed Meditech 6.15, including ambulatory, of which we are Meditech’s largest client. Physicians and staff alike have joined together with a small army of technology folks committing hundreds of hours to design, build, test, and validate a comprehensive solution. We appreciate their dedication to delivering a system that enhances MHS’s ability to provide exceptional patient care.” Congratulations to MHS and David, who joined the system in July after coming over from Duke.

From Chatty Kathy: “Re: online chats. I would like to see HIStalk provide scheduled ones for readers to share information.” I’m not a fan of Twitter for that purpose since it’s kind of kludgy, but perhaps other tools exist – YouTube and Facebook Live for video chats, GoToWebinar or conference calls for voice chats, and probably something other than Twitter for text chats. I’m skeptical at the level of demand for something like that since Twitter and Facebook seem to draw mostly people who aren’t decision-makers or influencers who just supportively stroke each other’s egos, but I’m open to ideas. My best one to use a moderated GoToWebinar session (one recognized speaker at a time) with the conversation transcribed afterward. 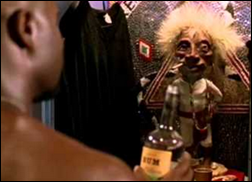 I admit as a card-carrying curmudgeon that I don’t understand why people identify emotionally with sports teams as though they are more than just their paying customers (except maybe for the community-owned, non-profit Green Bay Packers). The most brilliant marketing strategy in history was to brand companies that hire athlete-entertainers with city names, which profitably confuses locals into mustering misplaced civic pride in saying “we won” instead of the accurate “they won while I watched” (I’ll skip my usual porn analogy). Still, Cubs fans seem pretty excited, so perhaps their lives are now complete and at least Facebook will become nearly tolerable again once the World Series and the election are over. I lost what little interest I had when I heard that Charlie Sheen wouldn’t be allowed to reprise his “Wild Thing” Rick Vaughn character to motivate the Indians, although apparently there were some Jobu sightings. 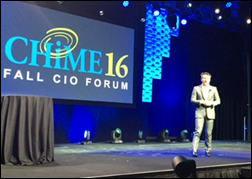 I’m looking at tweets and streaming video as Robert Herjavec of “Shark Tank” (and founder of two IT security companies) presents at the CHIME Fall CIO Forum in Phoenix. He’s going to be a winner at HIMSS17, along with his co-star Kevin O’Leary. I watch “Shark Tank” only when traveling since as a cord-cutter I can’t get it, but those guys (and their fellow sharks) are insightful and entertaining. The recently released book by the “nice shark” gets pretty good reviews on Amazon, although the “look inside” preview shows mostly the wide-margin, collaborator-written chattiness that boosts page count without necessarily imparting additional wisdom. The CHIME tweets also make it obvious that, as is the case with HIMSS, vendors get a lot of influence, podium time, and questionably designated awards in return for their financial support. The CHIMErs were set to rock out (air quotes optional) Thursday night to Foreigner, featuring the band’s one remaining 71-year-old member from its late-1970s heyday. The best thing I can say about Foreigner is that at least they aren’t Journey. 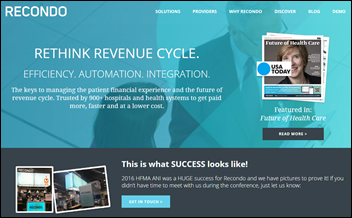 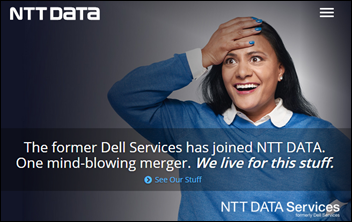 Tokyo, Japan-based NTT Data completes its $3.1 billion acquisition of Dell Services, renaming the business NTT Data Services. It was the former Perot Systems, acquired for $3.9 billion in 2009 by Dell, which apparently either overpaid or underperformed in bleeding off a large chunk of its value before offloading it to buy EMC. 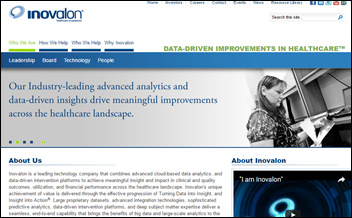 Analytics vendor Inovalon (known as MedAssurant until 2012 and acquirer of Avalere Health) reports Q3 results: revenue flat, adjusted EPS $0.10 vs. $0.09, beating revenue expectations but falling short on earnings. Shares rose sharply on the news, but are still down 24 percent in the past year. 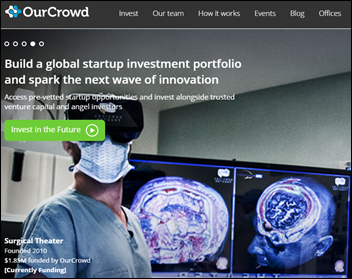 Israel-based equity crowd-funding organization OurCrowd launches a $50 million digital health fund with Johns Hopkins that will invest in early stage Israel-based companies. Accredited investors can invest as little as $10,000 in each company with pre-emptive rights to future fundraising. 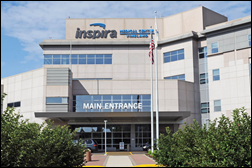 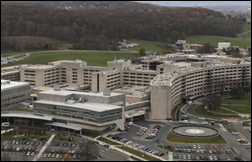 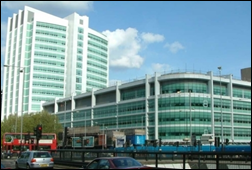 Great Lakes Health Connect will offer researchers access to “remnant specimens” from lab tests by matching them with patients who match their requests and who have consented to make their de-identified information available.

Catalyze participates in the HITRUST CSF Inheritance Program that allows its customers to demonstrate their security measures without doing their own testing. 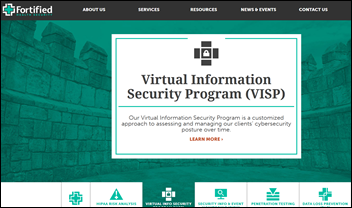 Mount Sinai Health System (NY) launches Rx Universe, a catalog of curated, evidence-proven mobile health apps that physicians can prescribe. The health system has launched a company, Responsive Health, that will license the app prescribing platform to other health systems.

I’m really going to miss Acting CMS Administrator Andy Slavitt when he leaves the job in January. His comment above came when he was asked  why the drug industry is the only group complaining about a national test of a YMCA diabetes prevention program. He also describes healthcare cost issues in Thursday remarks to the American Academy of Actuaries:

Transparency into costs is important in a world where more people are paying their own premium. Hospital profits in many cases are double or more what they were before the ACA. Drug costs are growing at record levels. And there are more endemic issues like the costs of untreated chronic diseases like diabetes or the large “tax” the fee-for-service system imposes on us when care isn’t coordinated or when bad quality is delivered. While people may not equate these costs or inefficiencies to the premiums they pay each month, we need to make those connections clear that this is where the real work needs to happen.

ONC names the 10 Phase 1 winners of its Move Health Data Forward Challenge, which calls for using APIs to enable consumers to share their information with providers and family members. I started to list the 10 and what they offer until I realized I had never heard of any of the companies and the products all sounded the same. Anyway, the 10 will be narrowed to five finalists in the next round and then one or two winners of the final phase. 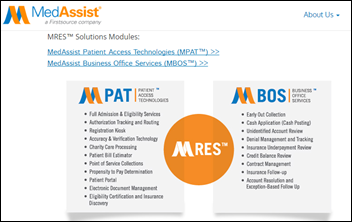 A corporate lawyer sues a Miami, FL hospital for allowing its telemarketing company MedAssist to call his mother with recorded marketing messages every seven days following her hospital visit. MedAssist says its messages are informational and that the hospital’s patient waiver includes their consent to receive robocalls. The lawyer is seeking class action status. 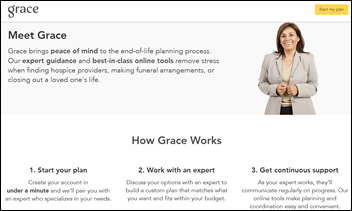 Forbes profiles Magic Leap, a secretive startup valued at $4.5 billion that is developing a next-generation computer interface, a head-mounted display that projects directly onto a user’s retina to create a mixed-reality environment. They’re targeting the consumer market, but possible healthcare uses are extensive (the founder earned a master’s in biomedical engineering). The video above – recorded directly from Magic Leap – shows the possibilities in perhaps showing a patient’s medical record while talking to them, reviewing surgical information in the OR, or reviewing medical literature while rounding.

An analysis finds that Microsoft’s IE and Edge browsers have lost 331 million users so far this year, dropping the company’s browser market share from 44 percent to 23 percent even though those products are bundled with Windows. Google’s Chrome jumped from 35 percent to 55 percent market share. Firefox users (including me) held steady at around 11 percent, while Apple’s Safari represented around 5 percent. 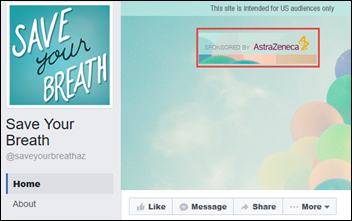 Facebook panders to drug companies with big advertising budgets in creating a new automatic scrolling for long lists of side effects, allowing drug companies to turn off comments on pages that promote their products to relieve them of their FDA responsibility to report any unverified side effects that patients might enter, and creating condition-specific community pages that drug companies can sponsor to promote their product. Facebook put together a team just to work with drug companies, explaining, “This was borne out of tons of interest we were getting from pharmaceutical advertisers to figure out Facebook.”

A South Florida woman complains that Boca Regional Regional Hospital charged her $7,000 for delivering her baby even though she gave birth in the hospital parking lot before she could get inside. Laypeople will miss the RCM aspect of the story – she didn’t get the bill until seven months later. 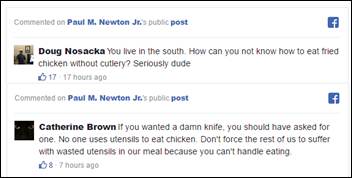 An attorney sues the Popeyes fried chicken restaurant for including only a spork in his drive-through order, claiming that be choked for lack of a plastic knife. In an update, the attorney drops his suit following “extreme comments directed to me and my family.”