HIStalk looks at the ways in which patients, providers, and vendors are using Amazon’s virtual assistant technology to improve healthcare inside and outside of the hospital.
By @JennHIStalk 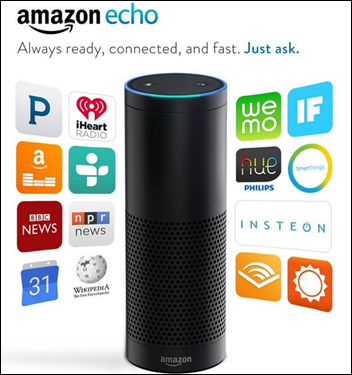 When it first launched in mid-2014, the Amazon Echo looked like nothing more than what many thought it initially was – a voice-enabled wireless speaker that could offer up information via the company’s proprietary Alexa voice assistant technology. Whether it was traffic conditions, weather forecasts, or trivia questions, the Echo at first seemed capable of helpful but extremely basic tasks.

As consumers began to dig into its features and Amazon opened up the Echo’s platform to developers, new capabilities began to emerge, many of which caught the eye of those with a keen interest in the role consumer-facing technologies can play in healthcare.

Straight from the Patient’s Mouth

As with many technologies today, (wearables being a prime example), consumers soon began using Alexa as a personal healthcare assistant. Julie McGovern, CEO of practice management consulting firm Practice Wise, was quick to recognize the value its features could offer in helping her care for her ailing mother. “Alexa has made life easier for my mother on a daily basis,” she says. “Besides medication reminders, which we set as timed alerts, she uses Alexa to add items to her shopping list, get news and weather updates, listen to music and audio books, and amuse herself by having Alexa tell her jokes.”

McGovern has her eyes – and those of her mother’s providers – peeled for new Echo aging-in-place features. She’s especially excited about a new interactive medication management feature that will notify designated family members and caregivers if her mother doesn’t acknowledge to Alexa that she has taken her meds after a certain number of attempts.

From Contest to Market

McGovern and her mother may soon be able to take advantage of just such a feature from DaVincian Healthcare, the Overall Champion of the PYMNTS.com & Amazon Alexa Challenge held earlier this summer. The Austin, TX-based startup created DaVincianRx for the competition, an “interactive prescription, communication, and coordination companion” designed to improve medication adherence while keeping family caregivers in the loop.

The prototype, which took six weeks to create, was developed with the end goal of helping patients become more active in their own care and staying on track with medication plans. “When we combine prescription abandonment and non-adherence costs,” explains DaVincian Healthcare Chief Medical Officer Meredith Porter, MD, “they are staggering. Estimates range around $300 billion every year. Yet even more concerning than the wasted medical costs are the clinical costs – worsening medical conditions, unnecessary appointments and hospitalizations, and poor health outcomes, including death. Out team focused on leveraging Amazon’s Alexa to find a real solution to address this problem, keeping in mind the importance of closed-loop communication between the patient, provider, and family.”

Porter adds that Alexa-enabled tool, which the company plans to roll out through the Amazon ecosystem, is perfectly suited for aging-in-place patients like McGovern’s mother. She also believes that it will do well, “especially with those who feel overwhelmed or isolated when it comes to their health management. Our skills help people stay on track with knowing why and when they should be taking medications; reminding them about new prescriptions or needed refills; and tracking adherence to offer the critical closed-loop connectivity to family members and health teams.”

Bringing Alexa to the Bedside

Providers are certainly aware of Alexa’s potential, perhaps none more so than Boston Children’s Hospital, which developed an Alexa-based app earlier this year that offers parents advice when their child runs a fever. BCH Chief Innovation Officer John Brownstein, PhD attributes the hospital’s interest in Alexa to its well-documented interest in emerging consumer technologies and how they might be applied to healthcare. “As voice-assisted technologies have emerged,” he says, “we began to think about whether or not this could be a new channel through which consumers can receive health information. Echo became a great example for us to choose because it had been such a commercial success, and we had this ability to work within the Amazon environment to build out Alexa-related skills.”

Brownstein has been pleased with reception of the KidsMD app, which has thousands of users. “It’s really a two-way form of communication in that we’re providing useful information to patients and also collecting really interesting data about symptoms that could potentially be used for better understanding things as they’re happening in various parts of the country. That background data can be useful for public health.” 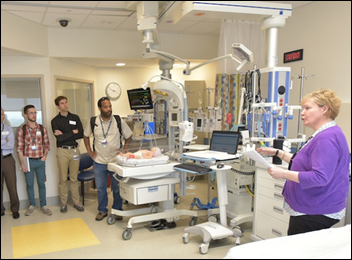 The KidsMD app is just the beginning as far as Brownstein is concerned. His team is busy evaluating a number of other use cases, many of which evolved out of a mini Alexa hackathon held at the hospital in May. “Could you use voice to pull up an image from the EHR while you’re in surgery so you don’t have to scrub out, for example? Can you use it as you’re interacting with a patient to take an image?” Brownstein poses. “We’re really excited about Alexa’s potential in situations where you want to either have the ability to keep working without having to change course,” Brownstein says, “or where you might want better interaction with your patient by not having to turn your back to them and start typing on a computer. Not to mention the opportunities for patients in their rooms. If they need to access information and they’re not mobile, this might also be an opportunity for them to access information or communication. We’re experimenting with all of these scenarios in parallel.”

Brownstein adds that patients invited to BCH’s Alexa brainstorming event were most interested in potential home uses, and his team in turn became interested in the resultant opportunities in collecting feedback and offering post-discharge care guidelines and educational materials. “To be able to get to that level of detail quickly through voice is really interesting,” he says.

BCH hasn’t yet pulled the trigger on formally launching these ideas because of privacy and security concerns. “We’re working with Amazon to figure out HIPAA compliance and better understand what the risks are,” says Brownstein. “We’ve built a consumer version of Alexa with the KidsMD app, so we’re not concerned from that perspective because it’s just providing general information. When you start talking about electronic medical data or interfacing with the hospital system, that’s when you really need to figure out how the enterprise version of Alexa will have to emerge. We’re still working on that.”

Prioritizing internal opportunities also plays a part in BCH’s further development of Alexa-related enterprise capabilities. “Like anything,” Brownstein explains, “it has to be thought of in the context of other efforts and where that should be prioritized. Then, of course, there’s the integration issue. There’s still a challenge to integrate with our existing Cerner EHR. We’ve done a prototype of it, but the integration into the core IT fabric of the hospital will take a lot of work.”

Whether it’s enterprise environments or home-based opportunities, Amazon’s Alexa technology is well poised to impact healthcare delivery and outcomes, not to mention patient satisfaction scores. “I think that any time you make information more easily available to patients, any time you make the experience more enjoyable, more seamless, I think you’ll have a real impact on the overall patient journey,” Brownstein enthuses.

Porter is equally enthusiastic about the innovation Alexa could bring to healthcare. “We recognize that the potential for this technology in healthcare is nearly limitless,” she says, “from health education and chronic disease management to reducing healthcare costs and transforming lives in health.”

The ultimate litmus test for Alexa’s role in transforming healthcare will be conducted in the lives of patients like McGovern’s mother. An enjoyable, seamless, and even humor-inducing experience that results in improved medication management and care coordination will surely help escalate Amazon’s virtual assistant technology to a vital part of the care team.