ProPublica begins posting OCR’s “closure letters” indicating the resolution of HIPAA-related complaints, noting that most of the letters involve the VA and CVS Health.

From Sharing CIO: “Re: Velocity Technology Solutions. My hospital was down also. They acknowledged a hardware failure that was exacerbated by human error, poor judgment, and a failed communication strategy. This is our second outage this year – the other one was Dell, who also had hardware failure combined with the fact that humans are not perfect.” More and more people are realizing that “cloud” is synonymous with “someone else’s data center” plus the hopes that a focused vendor will operate it better than they themselves. Most of the time that’s the case, but when things go wrong, the IT department is like end users in being stuck trying to get status updates, pestering the technicians who should be trying to restore systems rather than explaining why they’re down, and backseat driving the process.

From Stealers Wheel: “Re: my article. See this link!” I never know what to do when someone sends me the PDF of a book they’re working in, a LinkedIn article they wrote, or a link to a something they’ve written for a competing healthcare IT news site. I don’t really want to read someone else’s articles or using HIStalk to promote them, so I usually don’t reply because I know someone’s ego is involved. 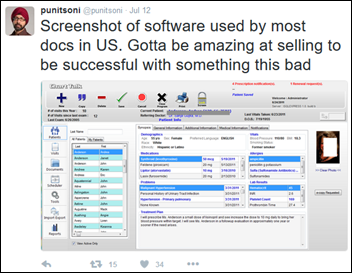 From LinkedInGuy: “Re: Epic. An ex-Google VP disses it.” At least he’s assertive in his cluelessness in smugly dismissing the entire healthcare IT industry on the basis of a single screenshot he doesn’t consider pretty. He’s awfully proud of his former Google background (working on games and products I’ve never heard of), so perhaps he should consider the rousing failure of Google Health, or for that matter, the horrendously awful UI and user-unfriendliness of Gmail and Google Docs, which make most healthcare software look positively cool by comparison. He seems confused  by the screen shot that he found on the Web since “most docs” don’t use a single specific EHR and the screen he illustrates is not Epic –  it’s actually a 2011-era screenshot of the Chart Talk EHR, a minor EHR player. He probably felt well informed with his tweet, but anyone who knows healthcare would infer the opposite.

From Pointy Head: “Re: work-life balance. Shouldn’t you be willing to sacrifice early in your career for later payoff?” That’s reasonable as long as you realize that the payoff might never come. There’s also that point in your career where you have to accept the reality that your career altitude has reached its zenith unless you change employers or jobs. I once worked for a health system executive who gave rather blunt but accurate advice to director-level people that applies to most everyone: if you yearn to be a C-level executive and either (a) your employer has already passed you over; or (b) you’ve hit 40, adjust expectations accordingly or perhaps start your own business if you feel your potential has been overlooked. Right or wrong, people in their 40s and certainly 50s shouldn’t confuse the hamster wheel they’re on with a career ladder in thinking they’ll get called up to the big show since the odds aren’t great. Those are the folks I hate to see busting their humps thinking they’ll somehow be rewarded accordingly. 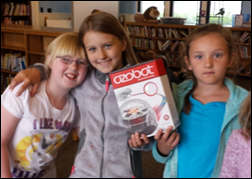 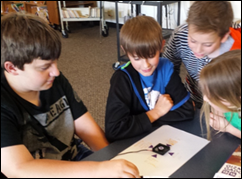 We funded the DonorsChoose grant request of Ms. McMahon, who requested maker space materials for her North Carolina elementary school media center. She reports, “The STEAM activities in our media center have ignited the creative spirit in my students. They just can’t wait to show me what they have created and just love to have their creation up for display or to see their picture on our website or news program. I have noticed a great improvement in the children who were often discipline problems in the past. They are engaged and excited and just hate it when its time to leave. There is high time on task and with a few rules in place – they abide by them well so that they don’t lose the privilege of working in our Creation Stations!”

I’ve been busy un-following dozens of people on Facebook who keep droning their heartfelt but one-sided and sarcasm-heavy political commentary. I really, really wish for enhancements to Facebook and Twitter that would force users to categorize their emanations into “work,” “politics,” and “114 photos of my angelic child,” allowing me to focus on the limited segments of their thought stream that I care about instead of just muting them completely. Social media have dumbed a lot of people down in filtering the news and opinion they follow, making them believe that nearly everybody thinks like they do and emboldening them to react with vitriol and personal contempt when faced with the inevitable other side of the argument. It’s like modestly talented executives who mistake the butt-kissing of their carefully chosen yes-men underlings as confirmation of their inherent brilliance. Unfortunately, real life is beginning to more and more resemble high school.

Listening: Cloves, who is actually 19-year-old Australian singer-songwriter Kaity Dunstan. I would say that she reminds me a lot of Adele, other than the fact that my fastest reflex is hitting “scan” on the car radio when a song by the ubiquitous Adele comes on and I’d actually stick around for Cloves. 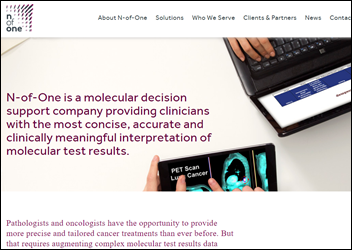 Oncology precision medicine decision support vendor N-of-One raises $7 million in a Series B round, increasing its total to $11.7 million. CEO Christine Cournoyer used to be president and COO of Picis. 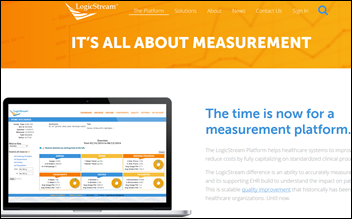 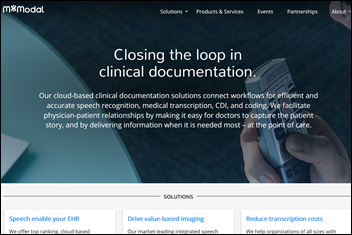 Cambia Health Solutions will merge its HealthSparq and SpendWell Health offerings under the HealthSparq name, offering users the ability to compare procedures and providers and then use SpendWell’s “buy now” technology to book appointments. 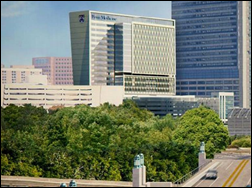 University of Pennsylvania Health System (PA) will build a 540,000 square foot, 18-story Center for Healthcare Technology in downtown Philadelphia, with Penn Medicine’s IT department being a major tenant. 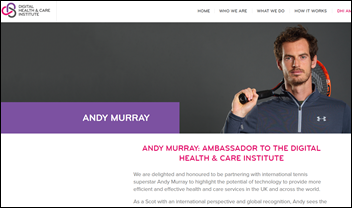 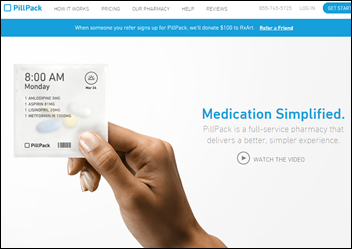 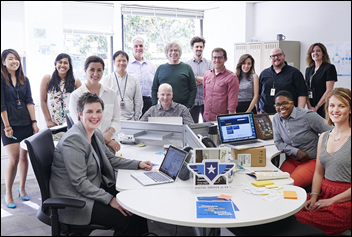 A fascinating article profiles the White House’s  US Digital Service, a group of mostly former Silicon Valley engineers that bypasses government red tape and contractors in saving taxpayers many times its $14 million annual budget by creatively solving IT problems that have long stymied federal IT lifers. It mentions Digital Service at VA (photo above), another skunkworks project that developed a new VA benefits appeals system, created a consolidated website at Vets.gov, and figured out a way for the VA and DoD to exchange scanned documents. Everybody loves the groups except fat cat IT contractors and the internal federal government bureaucracies that created the messes the kids are sent to clean up. I liked this passage about how the group broke the VA-DoD document logjam in just a few weeks:

They did not pick a toy task, but embarked on a challenge that had bedeviled the military for years. Unbelievably (except for in government), the DoD and VA use different systems for medical records, and the two systems get along just about as well as North and South Korea. Moving a medical history from one to the other — a pretty common task, since service people by definition become veterans upon discharge or retirement — could only be done by physically scanning the military records and sending files to the VA. But even that often failed, because the VA system was very finicky about file formats … “We had good people working on that, some of our best people,” says Secretary Carter. But they hadn’t cracked the problem, and indeed, hadn’t shipped anything for over a year. Nor were they thrilled at the idea of a bunch of hacker-types appearing in medias res. “At first the people who were working on the program were insulted at the suggestion they needed help,” admits Carter. “So some of them needed to be nicely helped to understand that was a good thing.”

A corporate payroll employee of the Phoenix-based Sprouts supermarket chain falls for a phishing scam in sending the 2015 W2 statements of all 20,000 employees in response to an email disguised to look as though it came from a company executive, with some employees already reporting that the scammers are trying to steal their IRS tax refunds. 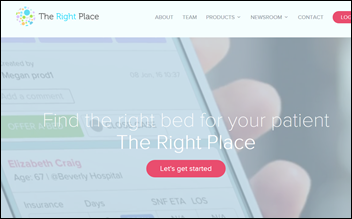 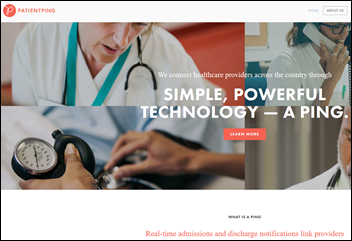 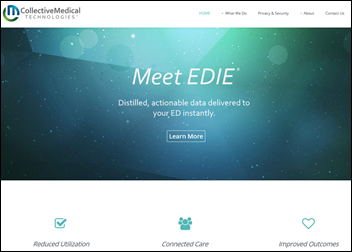 Collective Medical Technologies (team communication for managing patients who are regularly seen in multiple settings, such as EDs).

South Shore Hospital (MA), whose proposed acquisition by Partners HealthCare was nixed last year due to anti-trust concerns, tries to raise $222 million in donations to pay for a campus expansion ($62 million) and its Epic implementation ($160 million).