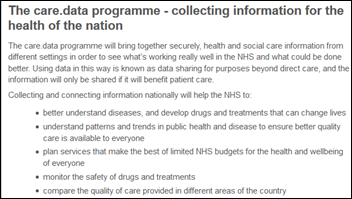 England’s NHS scraps its plan to create Care.data, a huge national database of patient information that was to be extracted from provider EHRs.

NHS planned to sell the partially de-identified information of patients who didn’t opt out to drug companies and other willing purchasers, but decided to end the program after two commissioned reports criticized its opt-out and consent policies as being less than transparent. 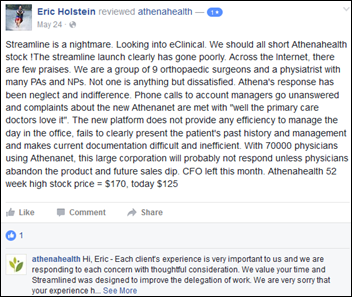 From Jolter: “Re: Athenahealth. The company is not immune to the same challenges as competitors, as feedback on this software rating site about their Streamlined upgrade says. I had caught wind on their last investor call that Streamlined isn’t well regarded within their customer base. Instead of worrying about unbreaking healthcare, they should be unbreaking AthenaClinicals.” Physician customers say Streamlined has changed Athenahealth’s EHR into a click-intensive “opaque, cumbersome product” that “has made a mockery of the Athena system” that is now “the worst system I could have ever imagined,” with Athena’s support reps blaming Microsoft or whatever browser the customer is using for their many problems. A pulmonologist says Athena is “crippling my practice” and claims the company is censoring its client forum. Athenahealth is also getting publicly ripped by many customers on Facebook over the forced upgrade. One doctor summarizes Streamlined as, “When it works, it stinks. When it does not work, it really stinks.” It’s tough to keep riding the “disruptor” horse when you’re a publicly traded company worth $5.5 billion, have an installed base of customers to maintain, and need to fawn to impatient investors who constantly demand improving profits. Imagine the outraged fun Jonathan Bush would have with this seemingly major stumble if he ran Epic or Cerner. Athena has quite a few product and acquisition balls in the air, so this is where they get to prove that they earned their seat at the Wall Street table as something more than a future-promising puppy nipping at the heels of dowdier but much larger and experienced competitors. 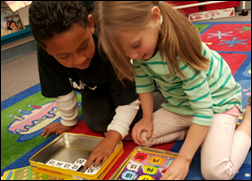 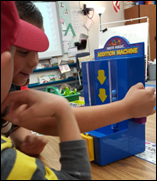 We funded the DonorsChoose grant request of Mrs. D from Nevada in providing math learning games for her kindergarten students. She reports, “As I pulled each math activity out of the box, they cheered, begging me to open it! …  the students thought it was ‘amazing’ and ‘so cool’ that a complete stranger would give us math games … The real gift within that box was the gift of knowledge and understanding. For some of my students, these math games are more than just math games, they are clarity and a road to success and confidence. I have witnessed so many ‘light-bulb-moments’ while using these games. Knowing my students are grasping complex mathematical concepts (for their age) is the greatest experience!”

July 13 (Wednesday) 1:00 ET. “Why Risk It? Readmissions Before They Happen.” Sponsored by Medicity. Presenter: Adam Bell, RN, senior clinical consultant, Medicity. Readmissions generate a staggering $41.3 billion in additional hospital costs each year, and many occur for reasons that could have been avoided. Without a clear way to proactively identify admitted patients with the highest risk of readmission, hospitals face major revenue losses and CMS penalties. Join this webinar to discover how to unlock the potential of patient data with intelligence to predict which admitted patients are at high risk for readmission. 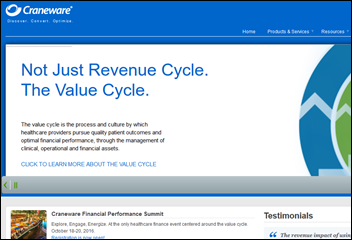 Scotland-based Craneware announces record sales for the year ending June 30, with revenue rising 60 percent on $58 million worth of contracts. 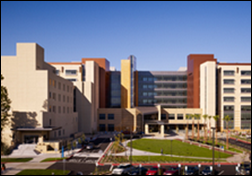 ONC issues a white paper contest for the potential uses of blockchain in healthcare, with submissions due July 29. Up to eight winners get their  travel expenses paid to present their paper at a NIST-hosted workshop September 26-27 in Gaithersburg, MD.

The government of South Australia finally funds the initial planning project for the migration of SA Health’s long-sunsetted patient administration software. The system’s vendor, Global Health, sued the government for breach of contract after it repeatedly refused to stop using the 1980s-era system, of which it is the only remaining user. The SA government has been focused on its troubled Allscripts EPAS rollout, but the state’s rural hospitals aren’t included in the implementation plan and also haven’t committed to upgrading to the current Global Health product. 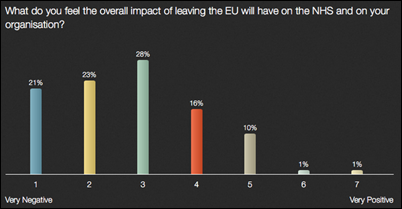 Peer60 is doing research on Brexit’s impact on England’s NHS. I was curious about its preliminary results even though they’ve surveyed only 80 hospital leaders so far (out of 200+ responses expected). Respondents offered some interesting comments:

The Federal Trade Commission drops its anti-trust challenge of the proposed merger of the only two hospitals in Huntington, WV following the state’s passage of a law that was intentionally written to shield hospital mergers from federal scrutiny. The FTC walks away with a warning that hospitals can work together to deliver clinical integrated care without buying each other in reducing competition, noting specifically that while it rarely intervenes in such hospital mergers, its quality and cost red flags were raised in the Huntington market. 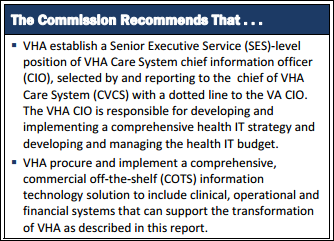 The independent Commission on Care, established by Congress to review the VA following the wait times scandal, includes among its recommendations that the VA replace its “antiquated, disjointed clinical and administrative systems” with commercial software products and that it establish a VHA Care System CIO position reporting to the chief executive. The chair and vice-chair of the commission are both CEOs of provider organizations that use Epic (Henry Ford Health System and Cleveland Clinic).

A federal appeals rules that anyone who shares a password may be violating the Computer Fraud and Abuse Act, which is intended to address hackers. The case in question involved an employee who gave his company password to former employees, but the ruling could technically allow people to be prosecuted under federal law for sharing their Netflix log-ins. 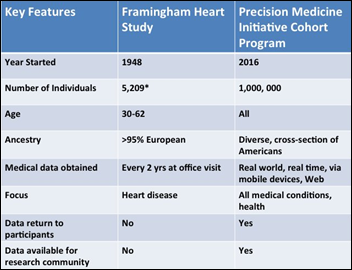 NIH awards $55 million in precision medicine grants to study the self-contributed data of 1 million volunteers, with the lead recruiting centers being Columbia University Medical Center (NY), Northwestern University School of Medicine (IL), the University of Arizona (AZ), the University of Pittsburgh (PA), and the VA. Vanderbilt, Verily, and the Broad Institute will provide data analytics. In addition, Scripps Translational Science Institute and Eric Topol, MD (whose summary of the project is above) will  get $120 million over five years to develop apps, sensors, and processes to recruit the “citizen scientists” and give them the ability to share their collected information with their physicians. The scientist in me loves the idea, but the public health angel on my other shoulder wishes we would focus on the less-sexy blocking and tackling of reducing infant mortality, managing expensive chronic conditions, addressing social determinants of health, and resolving the ugly dichotomy of expensive “healthcare” vs. “health” in applying equal vigor to chasing goals that move the overall health needle further without having as their primary motivation the eventual lining of someone’s pocket.

The Wall Street Journal suggests that Apple fanboys resist the urge to pounce on the just-released public beta of iOS 10, warning that it’s buggy (not surprising for a beta release) and a pain to revert back to the prior version if things go wrong. The article tries to talk up a few new features, but they seem lame. 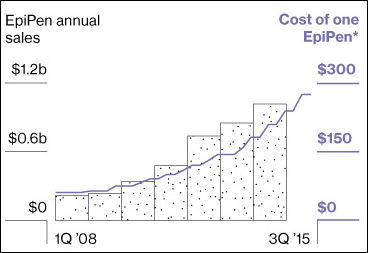 Mylan Pharmaceuticals has jacked up the price of decades-old emergency allergy auto-injection EpiPen to nearly $600 per two-pack over the past few years, giving cash-poor, high-deductible insurance consumers and public service agencies the choice to either go without the drug or draw up the much-cheaper generic ampules into syringes as needed for emergency doses. The drug was prescribed 3.6 million times last year as Mylan turned its 2007 acquisition into a billion-dollar product that provides 40 percent of its profits, pushing federal legislation that encourages schools to stock the injections and to recommend two doses instead of one per allergic episode. Mylan, which has a market cap of $22 billion and makes a lot of money selling drugs to the federal government via Medicare, shifted its headquarters offshore in 2015 to dodge US taxes.

The number of HIEs has dropped from 119 to 106 as federal funding ended, a study finds, with half of the surviving ones reporting that they are not financially viable. The most prevalent HIE problems include lack of a sustainable business model, the inability to integrate HIE information into provider workflow, and lack of funding. 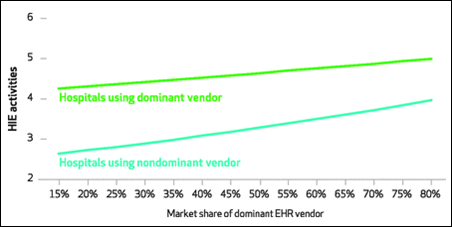 Another study in Health Affairs that reviewed AHA’s IT survey data finds that hospitals that use their area’s dominant EHR (usually Epic or Cerner) engaged in a lot more data exchange than their competitors that run other EHRs, which the authors speculate is because it’s easier to exchange information with other Cerner or Epic shops and that those vendors will help make it happen. My takeaway is that hospitals in a mostly-Cerner or mostly-Epic region that use different EHRs have to spend more money to exchange information and are thus less likely to do so, especially if their competitors are indifferent or hostile to the idea. 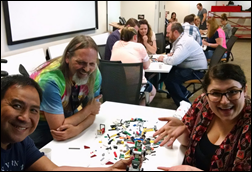 AdvancedMD tweeted out this photo of their team-building Lego derby. It’s always fun to see the folks in the trenches. 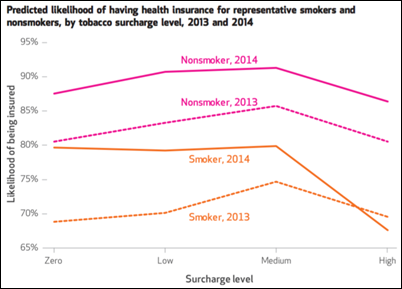 Smokers are less likely to buy health insurance than non-smokers, apparently because they are unwilling or unable to pay the higher smoker premiums allowed by the Affordable Care Act. The penalties levied for not being insured don’t seem to be working, especially when they represent only a small fraction of the cost of insurance.

I’m not entirely convinced that this Microsoft email is genuine even though he company has apologized for it, but it’s still funny to picture some low-level, corporately oppressed recruiter (whether it be at Microsoft or Epic) trying to relate to the kids he or she is recruiting by inviting them — in their cringe-worthy, baby-talk vernacular – to stop by for “hella noms” and  “dranks” just like someone’s white bread mom scanning Urban Dictionary looking for hip phrases to drop at the most embarrassing moment possible.