HIStalk looks at the resurgence of house calls, aided in part by government-sponsored value-based care programs, a need for increased market share, and growing consumer demand for app-enabled convenience and pricing transparency.
By @JennHIStalk 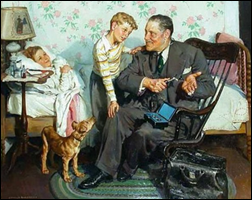 In today’s technology-driven society, the concept of the house call may seem quaint, evoking Norman Rockwell-esque images of the neighborhood physician toting his black bag down Main Street to Grandma’s house. Mobile health tools, however, are turning that image on its head as providers look to increase market share by increasing patient access points.

While house calls have always been around to some degree, digital health startups like Pager, Heal, and PediaQ are putting a new spin on what it means to “go to the doctor.” Even more traditional home care companies like Visiting Physicians Association are placing more emphasis on the role technology plays in caring for the elderly and chronically ill, often with the aid of government-backed incentives.

This new era of house calls is not without its detractors, however. Some physicians are quick to point out that patients can’t establish a true, trusting relationship with this new generation of house-call providers, and that care coordination will suffer. Others, especially those in more metropolitan areas, point to struggles for market share between the local health system, urgent care centers, and app-based house call companies.

Consumers will likely have the last word, as their increasing insistence on convenience and easy access, plus heightened awareness of healthcare costs, leads them away from higher-priced health system monopolies into the arms of the more tech-savvy (but somewhat unproven) competition. 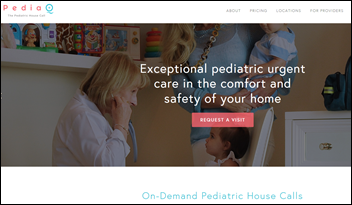 Dallas-based PediaQ has made technology a core part of its business model. Founded in 2014, the app-based pediatric house call provider has raised $6.4 million to date and has already expanded beyond Dallas to three additional cities in the Lone Star state.

“PediaQ has been developed as a function of change in our culture towards on-demand services, as well as innovation in creating new access points for health systems that are expanding their networks to capture market share,” explains CEO Jon O’Sullivan, adding that the cultural shift to making purchasing decisions via smart phone played a big part in PediaQ’s decision to steer clear of brick-and-mortar locations. “I’ve been on the business strategy side of provider services in healthcare for over 25 years now, and for much of that time I worked with health systems that sought to expand their market share through their provider networks. Throughout that time, I’ve watched the healthcare market evolve to a much more consumer-driven equation.”

While PediaQ’s funding seems to indicate investor confidence, O’Sullivan points out that building trust with customers and the surrounding healthcare community has taken time. “Initially, like any new brand, we had to spend a majority of our resources on consumer education,” he says. “However, once parents started using PediaQ and were able to experience the ease and comfort of a house call for a sick child, the results were nothing short of phenomenal. The main catalyst for our consumer activation and expansion very quickly became the users themselves.”

When it comes to perceived competition with local PCPs, O’Sullivan points out that the company sees itself as an augmenter and supporter of the relationships its customers have with their PCPs. “We’re not out to replace that relationship,” he says, “which is reflected in the fact that PediaQ focuses on after-hours care and ensures that the medical record from the visit is delivered to the PCP the next day.”

Aside from apps, telemedicine has probably had the biggest impact on the resurgence in house calls. It has certainly given companies like Aspire Health and MedZed an edge over more traditional home care companies, especially when it comes to “windshield time.” 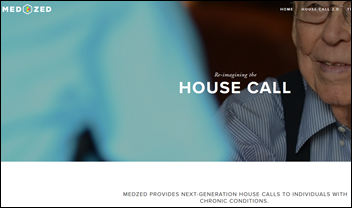 Technology has been crucial to the nascent success of Atlanta-based MedZed, which identifies itself as a telemedicine-enabled home care company that provides “21st century house calls” for high-risk and needy patients.

“We decided we had to go into the home in order to service these people,” says MedZed co-founder and chief medical officer Neil Solomon, MD. “We were also well aware that it’s very expensive to pay a doctor or even a nurse practitioner to drive all over the place, especially in certain geographies that are either very spread out or have heavy traffic, like Los Angeles. You can only do maybe four or five visits in a day if you’re driving. It’s inefficient. Plus, there aren’t enough doctors to do this in order to scale this kind of business.

“Our model utilizes telemedicine to make the delivery of care much more efficient,” Solomon says, adding that the first half of a MedZed visit is spent between a care provider and patient going over medications, screenings, and assessments, while the second half is spent on remote consult with a physician, all of which is documented in MedZed’s Drchrono EHR.

“All of our care providers can see the same notes in our EHR,” Solomon explains. “We can export those notes in a fashion that other EHRs can read. We can import laboratory and pharmacy data from other sources so that we can see the full picture of the patient.”

MedZed seems to have distinguished itself from other modern-day house call companies in that it has written its own software for HIPAA-compliant video conferencing and logistics.

“Writing the logistics software was challenging,” Solomon admits. “It helps determine where to send each care provider during the course of the day, figures out drive times, and interfaces with the PM systems of MedZed-affiliated physicians so that they can easily access our video consults. We couldn’t find software on the market that could do all of that.” 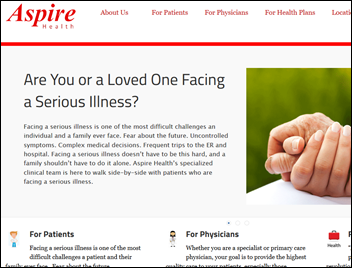 Founded in 2013 with high-profile help from former Senator Bill Frist, MD, Nashville, TN-based Aspire Health incorporates telemedicine as well as a number of other technologies into its business model, which focuses on home care for seriously ill and end-of-life patients. Aspire Health Chief Medical Officer Andrew Lasher, MD has seen technology make a tremendous impact on the company’s ability to provide compassionate palliative care to its patients in 11 states and Washington, DC.

“Patients and families are more connected than ever,” he points out. “Secure video conferencing can be an incredible adjunct to high-touch care at the bedside, and in some cases can act as a stand-alone visit. Much of what we do at Aspire is communicate – clearly and compassionately – with vulnerable patients and the people who love them. These family members often live far away, and we can use telemedicine to bring a distant family member to the bedside. There are also medical conditions that can be evaluated perfectly well with video, and many patients will tell you that the conversations they have with a doctor or nurse practitioner through telemedicine is every bit as sacred and impactful as the ones they have in person.”

“There are a number of other technology supports that can support care of the seriously ill,” Lasher adds. “We’re only just beginning to scratch the surface with remote-monitoring devices that help keep track of blood sugar, blood pressure, and that connect isolated patients to Aspire and community-based resources in moments of crisis. We’re seeing that these sorts of devices can integrate fairly seamlessly and in no way hurt the patient experience. Patients can often be reassured through technologic connection, and it only makes the care we provide more personalized.”

Aside from telemedicine, the Aspire team is also looking at solutions around the storage and transmission of advance care-planning documentation, solutions around immediate notification of when patients go to the ER or hospital, and placing tablets in patient homes that enable Aspire caregivers to monitor symptoms and needs on a daily basis. “Anything that helps us relieve a patient’s suffering or avoid an unnecessary and dangerous hospital stay is something we’ll investigate,” says Lasher. “I expect that we’ll be doing more with technology in the next year as the evidence base increases and the offerings improve.”

Analytics and Home Monitoring will be Key to Independence at Home 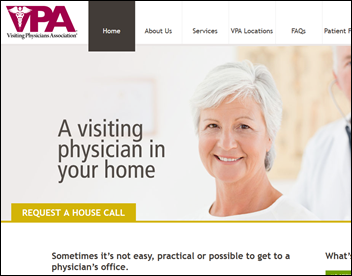 Home monitoring technologies are also in the cards for the Visiting Physicians Association, a key participant in the Independence at Home program for Medicare beneficiaries with complicated chronic health problems and disabilities. The pilot house call program, now in its second year, helped save Medicare $25 million in its first year thanks to reduced costs associated with improved medication adherence and fewer ER visits and hospital readmissions. Nine of the 14 participating practices, five of which are run by VPA, earned bonuses totaling nearly $12 million.

“VPA has achieved favorable results because of the technology we deployed into the home setting,” explains Dave Viniza, chief information officer of US Medical Management, VPA’s management services organization. “Our Aprima EHR has offline capacity second to none. Our physicians have a full patient medical record regardless of the connectivity of the patient’s home. Because we were searching for consistent, informed, real-time medical decision-making, VPA also deployed StatusScope, a home-grown application that keeps providers informed, during their visits, of recommended disease-driven protocols.”

“VPA has also used predictive analytics to identify the most at-risk patients and prevent unwanted ER visits,” he says. “By reducing those, we reduce unnecessary and unwanted hospitalizations. We’re continuing to develop those analytic tools. We’re implementing an enterprise data warehouse and dashboard analytics system, as well as implementing a care management system that will automate and streamline the development of non-physician care plans and patient management.”

“We’re also investigating appropriate home-monitoring tools for our patients,” Viniza adds. “We would like to marry the monitoring to predictive applications so that we can improve early identification of approaching medical needs. The end goal is to continue reducing ambulatory-sensitive ER and hospital utilization.”

While there’s no doubt that this new era of house calls is being fueled by technology, the industry-wide shift to value-based care – however slow it may be – is also helping things along.

“Patients prefer to be at home when they can be,” Lasher says. “That’s especially true for patients with chronic or life-limiting conditions. They know that the hospital isn’t always the best place to be, and that the best treatment for them may occur in their home – treatments that can help them live longer and feel better. For Aspire, seeing our patients where they live is a real privilege. Value-based care is such an accurate statement, since, for the vast majority of our patients, their own personal values make it clear what kind of care they want, and how it should be delivered.

“Clearly, there’s a lot of opportunity to expand what can be done outside the hospital or clinic, and to care for people on their own turf, rather than in a medical setting,” he adds. “Black doctors’ bags are going to be back in style, if they’re not already.”