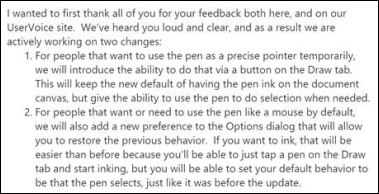 Good news from the people at Microsoft, who are listening to the user community’s pleas to return critical functionality for those using Office 365 on tablets. They’ll be adding back the ability to use the pen/stylus as a mouse. That makes me happy on multiple fronts, since not only will I be able to go back to previous workflows, but I won’t have to spend hours stripping my Surface Pro to return it to the store. There’s no ETA on the fix yet, but other than that recent failure, I really have been satisfied with my purchase.

Friday is the last day for providers and hospitals to attest for 2015 Medicare EHR Incentive Programs. If you’re on the provider side, I hope your attestation is long complete. I’ve been helping a client with a last-minute effort and we ran into a lot of issues, mostly on their side, but some with website slowness which I can only assume is due to volume. Fortunately, we finished their attestations last night and I can breathe easier going into the weekend.

Last-minute projects always make me cringe, but as a small business person, they are valuable. It’s a way to help clients in a pinch, which can bring considerable work in the future when they’re happy with your services and realize you saved their backsides. Several of my steady clients have met me while in dire straits and I’m happy to continue working with them. It can make the work unpredictable, though. I’ve been fortunate to have a couple of clinical informaticist friends that I can ask to help out when one of those situations hits or when I need coverage to take some real time off. It’s been an informal arrangement, though, and I’ve been on the fence about whether I should engage someone to work with me on a more dedicated basis.

Finding someone who knows the space in the same way I do but who isn’t already crazy busy or who doesn’t have a full-time job has been a challenge. There are a lot of inpatient CMIOs that are interested in branching out, but in order to service my clients, I needed someone with solid ambulatory experience who can also cover the softer disciplines like change leadership and team development.

After talking with multiple candidates and conducting a trial run, I’m happy to say that I officially have a partner. He’s one of my long-time mentors and I suspected that his recent retirement wouldn’t last long, so was glad to hear of his interest. It has been fun working together on projects. I’m sure that due to the difference in our ages and his more prominent career, some people might assume that I’m working for him. It’s a risk I’m willing to accept. However, my company logo (which involves a figure in a dress and stilettos with a briefcase) should make for a good icebreaker when he hands out business cards.

I’ve had quite a few emails from readers this week, which always makes me smile.

From Think Twice: “Re: MU. Your recent Curbside Consult describes all that is/was wrong with MU. Instead of ‘certifying’ systems, MU should have defined a data ontological framework, a file standard (standard XML/CCDA), and an information bus that all systems that handle PHI must comply with. In that world, we wouldn’t be certifying vendors, but rather required capabilities. It would have opened the door to innovation. I’m not sure how we would handle, app-app communication across the workflow (like SMART is supposed to address), but we’d still be much better off.  More importantly, this wouldn’t have dealt with how providers protect their data (just to keep patients inside), while using HIPAA to hide behind (another story!) Although Meaningful Use as we knew it is on the way out, there are plenty of regulatory and quasi-regulatory bodies waiting to take us to the next level as they drive towards value-based care and other buzzword-worthy initiatives. I hope they’re listening, and look at how much money has been spent vs. how many provider hours as being wasted. The recent piece on providers spending hundreds of hours keeping up with quality measures was telling (especially since we haven’t seen a commensurate uptick in patient outcomes). It may be too early to tell, but my sense from the trenches is that it hasn’t been worth it.”

From Keeping Up: “Re: HITECH. I read most of the HHS report. It’s the same garbage we hear every month about the ‘numbers’ of EPs and EHs that used a certified EHR. They may ‘use’ them, but do not attest to MU or any of the other BS. It’s the same stuff — we gave out $30 billion in incentives, EPs and EHs took that and paid it all and more to EHR vendors (they don’t say that), and it’s still a mess. The lack of vision of ONC and HHS about this is amazing to me. EPs and EHs were moving towards EHRs prior to HITECH, but instead, HHS and ONC made this artificial market. Sure, it moved the adoption needle, but to what effect? Now you have the same problems as before, but EHR vendors made a ton of money. That bubble is about to burst and it will be ugly.” He goes on to mention the lack of improved patient care, safety, security, efficiency, and costs worrying that providers will bear the blame. I don’t disagree – we’re already seeing practices who have more staff than they did five years ago but are less productive and feel like they are providing a lower quality of care. Certainly there are people who have been able to make it work, but not without a considerable amount of resources or without sacrifices at the financial or personal levels. He mentioned watching his peers leave practice due to the pressures and I’m seeing that in my community as well. Given the costs of training, the risk of burnout, and the constant external pressures, I don’t think I would recommend a career in medicine unless someone felt a true vocational calling.

From St. Elmo’s FHIR: “Re: LOINC. Regarding your comments on regulations requiring customers to use LOINC for reporting laboratory measures but not requiring lab vendors actually send the codes with the results, amen. This is one of the stupidest things that’s been done. Although you mentioned that interoperability isn’t going to change the culture of competitive advantage, eventually companies learn that interoperability isn’t in competition with this. My view is that the vendors have learned this – based on working with development teams – but it’s a time-to-market problem. The solutions they are working on today haven’t hit the market, but when they do, it will be clear that competitive advantage is built on interoperability.” As much as I’m a bit pessimistic about the future of medicine, I do want to have hope. The old adage of “knowledge is power” would seem to lead organizations to want to share as much as possible. There is a leadership training game I use called “Win All You Can,” which ultimately shows that the only way for everyone to prosper is for everyone to work together for the common good. I first ran into it during an outdoor leadership course and have used a variation of it ever since. Maybe we can get ONC to require knowledge of it (or something similar) in the next round of incentive or penalty programs.

Is interoperability really the answer? Will knowledge set us free? Email me.