From Spiffy Shades: “Re: McKesson’s ambulatory EHR/PM products. They are selling all of them to E-MDs.” McKesson will apparently exit the physician practice business by selling Medisoft, Lytec, Practice Partner, and Practice Choice to E-MDs. Marlin Equity Partners bought E-MDs in March 2015 and AdvancedMD in August 2015 to add to its MDeverywhere holding. It seems to have some synergistic plan for the hodgepodge of EHR/PM products of McKesson, which I speculate is slowly but surely divesting its way out of healthcare IT except maybe for RelayHealth. 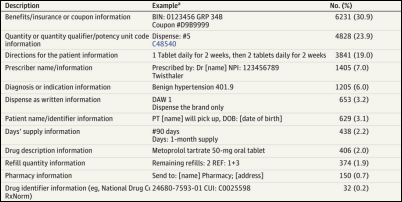 From Robert Lafsky, MD: “Re: article on EHR free-text notes. One colleague wryly laments that a lot of doctors just use the EMR as a word processor and this is a good example. The inability to deal with structured fields seems endemic. Are we just doomed to wander the desert for 40 years until a new generation has replaced us?” A study of 26,000 electronic prescriptions that were sent to community pharmacies by community-based prescribers finds that in two-thirds of them, the prescriber placed information in the free-text field that should have instead been entered as discrete data. Nearly one in five of the prescriptions had free-text instructions that didn’t match what the prescriber actually entered. Another 10 percent of prescriptions were actually cancellation requests, sent either because the EHR vendor doesn’t support the standard cancellation message or the prescriber didn’t know how to use that function. More than half of the inappropriate free-text messages involved  insurance benefits or dispensing quantities. The authors conclude that EHR and e-prescribing vendors need to improve product design and usability testing, apparently holding prescribers harmless for using their software incorrectly. 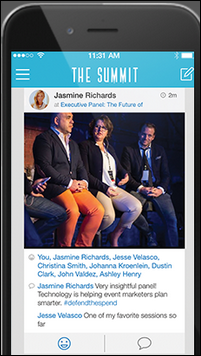 From Dingo: “Re: HIMSS conference app. You should create one so that readers can connect with each other, see a sponsor event schedule, and find social events.” HIMSS had its own app, but I didn’t try it. I assume it focused on the educational session schedule. If you used that app, what did you like and dislike about it? If not, what kind of app would you use?

From I.C. O’Jay: “Re: innovation. It’s pointless talking to a health system CIO about innovative products. They have no interest or insight.” IT executive management is very much like public health. You’re trying to do the most good with the biggest impact given a limited budget and headcount. Do I vaccinate 1,000 children or launch a nutrition education program? Do I keep a marginal but inexpensive department system and use the money to fund a revenue cycle technology project? How should I prioritize the need to apply endless system upgrades and infrastructure projects to keep the lights on against some startup’s cool but unproven app? The hardest part about running an IT organization is enlightening departments, end users, and vendors about the constant constraints under which the organization operates – enterprise IT isn’t like buying an Office Depot computer or installing an iPhone app and it never will be. Part of the job involves watching well-meaning but naive users storm off in a huff because their shallowly-researched bright idea is not feasible given the organization’s budget, tolerance for risk, competing projects, and strategic focus. You say “no” a lot, and rightfully so. In fact, I might speculate that CIO success is predicated more on what projects they don’t undertake rather than the ones they do.

From NextGen Customer: “Re: the former hospital systems business sold to QuadraMed. During a recent conference call, a comment was made that QuadraMed bought NextGen for the customers and will not be making any enhancements. One individual said we will have to move to the other product. I contacted another NextGen customer and they said they had already been approached.” Unverified. 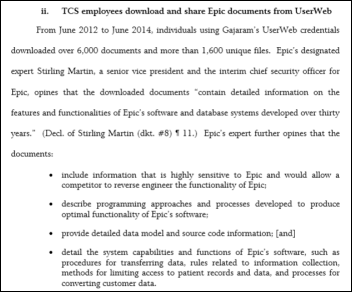 From Court Watcher: “Re: Epic v. Tata. There’s a new order on a motion for summary judgment. The court said there’s compelling evidence of unauthorized access by Tata’s employees over an extended period of time. The court found Tata guilty of violating the computer fraud laws and the Wisconsin computer crimes act. They also apparently violated their contracts.” I’ve written about this case a few times. Epic says Tata’s India-based employees claimed to be working for Kaiser Permanente in trying to slip into Verona-based classes and to download everything in the consultant portion of Epic’s UserWeb system for enhancement ideas for its Med Mantra hospital information system. Most of the legalese is over my head, but the Tata people seem to be real scumbags. People claim Epic is paranoid about protecting its intellectual property, but more than one example exists of people in a foreign company trying to steal Epic’s information to create a competing product.

From HIT Banker: “Re: HIMSS conference. For the last two years, one of our female junior staffers has been solicited by various male executives to join the guy in his hotel room. I wonder how much debauchery is going down behind the scenes at HIMSS? I would like to see a poll on this, although I doubt you would get honest responses. I might simply ask, ‘Did you do anything at HIMSS that you would not tell your significant other?’” What HIMSS attendees do as consenting adults is their own business, but I will modify your curiosity into this poll: did you experience unwanted sexual overtures or comments during the conference that made you uncomfortable? 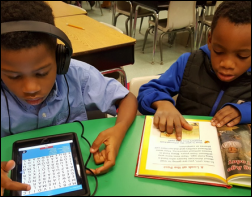 We fulfilled the DonorsChoose grant request of Ms. Jones from Georgia in providing her first grade class with an iPad, case, and headphones. She reports, “My students are excited about learning when they are handed an iPad, as if it was a treat or reward. Their little eyes light up and they become engaged in their learning and complete more tasks with a higher rate of success … when they are allowed to use the iPad, their confidence and self-esteem increases and more work is completed in a timely manner. This is mainly due to the immediate feedback after completing each assignment. This gives them a great sense of accomplishment.” 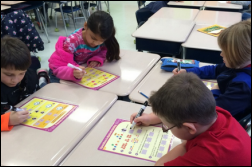 Also checking in was Ms. K from Tennessee, whose second graders are “having fun while learning” in using the seven math games we provided.

Listening: The Struts, Brit rockers that sound to me like a stew of Queen, Slade, and Quiet Riot. Then it’s off to some harder stuff from the amazing Avenged Sevenfold, to which I’ll be desk-drumming for the next several hours (especially since that particular song was dedicated to drummer The Rev, who died of a drug overdose in 2009 at 28).

March 16 (Wednesday) noon ET. “The Physiology of Electronic Fetal Monitoring.” Sponsored by PeriGen. Presenter: Emily Hamilton, MDCM, SVP of clinical research, PeriGen. This webinar will review the physiology of EFM – the essentials of how the fetal heart reacts to labor. The intended audience is clinicians looking to understand the underlying principles of EFM to enhance interpretation of fetal heart rate tracings. 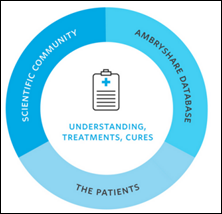 The CEO of genetic testing company Ambry Genetics makes the de-identified data of 10,000 breast and ovarian patients available to researchers, bucking the trend of biotech companies that believe they compete on data rather than testing. CEO Charlie Dunlop is blunt about his motivations: “I have stage 4 cancer myself. I don’t care what goes down. This is what we’re doing at Ambry Genetics. We’re here to try to save the world, period." The AmbryShare website defines itself as, “It’s a chance to help stop data hoarding and unlock the promise of the human genome project.”

Cerner announces a $300 million share buy-back program. Above is the one-year share price of CERN (blue, down 23 percent) vs. the Nasdaq (red, down 4 percent). Shares have dropped to July 2014 prices. 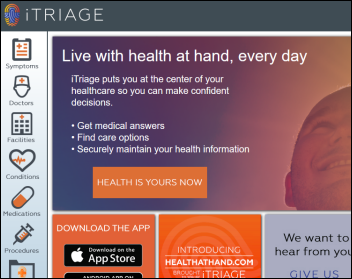 MedCity News confirms the rumors I ran here this weekend indicating that Aetna has laid off dozens of people working on its iTriage app. Aetna confirms the layoffs without providing numbers, adding that it plans to combine iTriage with its WellMatch price transparency app. 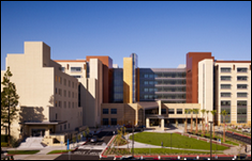 UC Irvine Health (CA) chooses Phynd to unify, manage, and share the data of its 25,000 providers across multiple IT systems. 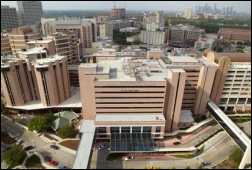 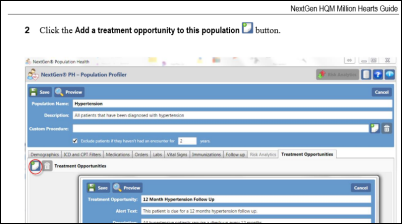 ONC releases the Million Hearts EHR Optimization Guides, showing providers who use Allscripts, Cerner, or NextGen how to use their EHRs to manage aspirin therapy, blood pressure, cholesterol, and smoking cessation. ONC calls for other EHR vendors to develop guides for their products.

A Texas anesthesiologist and hospital owner is convicted of billing $10 million for supervising CRNAs when he wasn’t actually present. The government provided evidence that at the times he was supposedly working in the OR, he was actually (a) undergoing surgery himself; (b) flying on his private jet; and (c) traveling out of state. He also signed medical records attesting to the services he provided before the surgeries even started. 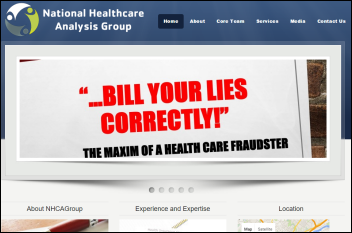 Wired profiles big data entrepreneur John Mininno, who has built a business around analyzing CMS-released claims data to find likely Medicare fraud, then finding an employee of the organization willing to file a whistleblower lawsuit in return for sharing any settlement. His programmers look for unusual patterns, such as providers who file a normal claim volume on a snowy day when they probably weren’t running at full capacity. 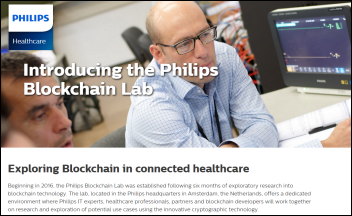 Philips launches the Netherlands-based Philips Blockchain Lab, which will explore the use of the cryptographic technology in healthcare. 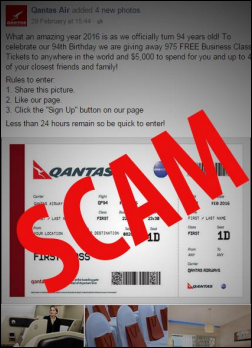 An interesting article explains the motivation of shady people who post idiotic Facebook puzzles, pet photos, and emotional stories that beg users to “like them” or share them in some way. “Like-farming” attempts to rack up a ton of exposure, after which the original post is changed to either spam or malware links that pollute your own Facebook news feed as well as those of your friends in some cases. New South Wales police warned people last week of the phony contest above (posted under a fake Qantas Air account) in which Facebookers were urged to click “like” for a chance to win free travel.

A study of Android diabetes app privacy policies finds that 81 percent have no privacy policy at all and only 4 percent of them say they will ask users before sharing their data. Most apps shared insulin and blood glucose levels, and of those that offer a privacy policy, 40 percent don’t disclose that they share data.

A stolen, unencrypted laptop belonging to physician practice Premier Healthcare (IN) exposes the information of 200,000 people. 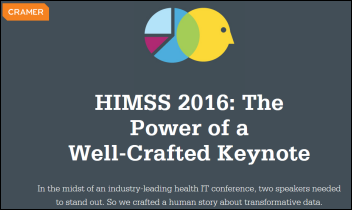 Marketing firm Cramer brags about being hired by Athenahealth to create the HIMSS16 data sharing presentation of Jonathan Bush and John Halamka, developing the “relatable, human storyline,” creating a PowerPoint to “wow the audience,” and coaching the presenters through a “table read” and “two simulated on-stage rehearsals.”

A six-hospital study finds that monitoring discharged heart failure patients with telemonitoring, telephone calls, and health coaching had no effect on 180-day readmissions.

An ED doctor in England faces a disciplinary hearing after tweeting out tirades that include a proposed fine against “ambulatory neurotics with a few aches and pains” who call an “ambulance for a broken nail, an earache, period pain, not being able to sleep …” and who are “crippling the NHS.” He also tweeted, ““I’m sure ADHD is merely a polite term for a child who is just a little sh**”