Epic gets back to its roots – and attempts to keep up with the competition – with another foray into remote hosting services.
By @JennHIStalk

Rumors began swirling earlier this year when Epic purchased Mayo Clinic’s data center in Rochester, MN. The reportedly $46 million deal will see Mayo, which is scheduled to go live on Epic in 2017, lease back the 62,000 square-foot facility to Epic for at least the next four years. It’s a somewhat unconventional arrangement that signals that the company is ready to take hold of the remote hosting market.

Epic Senior Vice President Stirling Martin explains that, “In terms of the capability of the hosted systems, it’s identical to what a self-hosted organization would have. Our mission in hosting is to allow organizations to retain all of the same flexibility and configuration they would have if they were running the systems themselves. They still have a highly open platform for interfacing and integrating with third-party systems that they’re running in their own data centers or in third-party data centers.”

Remote hosting is not a new endeavor for Epic, which started out in that very field back in 1979. “About four years ago,” Martin explains, “we embarked on building a data center both for our own purposes and with an eye towards eventually doing hosting. We made the decision about 18 months ago to move forward and get back into remote hosting. Since that point, we’ve been building up infrastructure and working with early customers to get them onto the platform.”

Epic offers two hosting options. Full hosting — which includes the production systems, training, testing, and a disaster recovery copy in a geographically separate data center –  has so far been the most common request.

Standalone disaster recovery is another option. Martin notes that, “This is a great opportunity for organizations that may not have a second data center and yet want to ensure that they have a copy of their system up and running in a data center that’s geographically separate enough to be away from a natural disaster.”

He declined to give specific pricing numbers, though he did stress that pricing ultimately comes down to the size of the organization. “The number of concurrent users is the metric we talk about most,” he explains. “We factor lots of data points into the overall sizing equation – the different products they’re going to be using, if they have one hospital and a very large ambulatory practice or many hospitals and a smaller ambulatory practice.”

Clarifying the Customer Base

In making the initial announcement about its re-entry into remote hosting, the company said it would first offer the service to its medical group and small-hospital clients, potentially opening it up to large-hospital users later.

Martin says that the remote hosting service is open to all “members” of the Epic community. “Our mission in doing this was to provide our members with an additional hosting option,” he says. “We’ve probably got a little over 250,000 end users that will be hosted by Epic as these organizations roll out their systems. We have three healthcare organizations that are live in production with a couple more lined up in the coming months. All of the members that had signed up for Epic hosting are live in a non-production way, in that they’re building up the systems as part of their implementation activities. We’re preparing them for go-lives over the next six to 12 months.”

He couldn’t comment as to the number of customers that will ultimately switch to Epic for their hosting services, though he did stress that, “feedback from sites that are live on it today is very positive.” 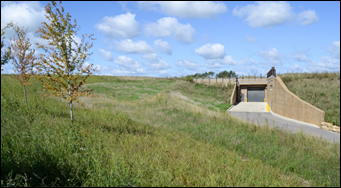 The data center’s infrastructure includes 100,000 square feet of space, buried under a nondescript hill above the floodplain on Epic’s campus and ready to accommodate added capacity as the need arises. Power generation capabilities are also underground, as is the infrastructure necessary to run critical systems.

The company is currently using a co-location facility as its secondary site until the Mayo data center can be brought up to speed. “With the purchase of that state-of-the-art data center,” says Martin, “we will migrate the existing disaster recovery systems up to the Rochester data center and then start using that as our secondary facility going forward.”

Catching Up with the Competition

Some industry insiders see Epic’s remote hosting resurgence as an attempt to keep up with Cerner, which has offered those services since 1999. Its winning DHMSM bid (with primary contractor Leidos) and the DoD’s $51 million decision to move the project’s hosting to Cerner headquarters makes the notion seem that much more valid.

“Both vendors are investing heavily in this capability,” says Impact Advisors Vice President Lydon Neumann, “which will be difficult for other competitors to match in performance and breadth of service offerings. As for Cerner, they will continue to be a strong competitor and Epic’s entry into this market segment validates Cerner’s value proposition for this increasingly attractive hosting option. Epic and Cerner are creating a significant barrier for the other vendors in the market.”

Neumann adds that remote hosting is already bolstering Epic’s long-term prospects. “The market appears to be responding favorably to Epic’s entry into this segment. As a result, more customers and a broader segment of the market are now likely to consider Epic in order to leverage external capabilities and expertise, while gaining access to more technical services to properly maintain and enhance Epic’s enterprise solutions. Customers and prospects will also be increasingly proactive in aggressively reducing costs and will look to remote hosting to solve long-term challenges of managing and sustaining their technology infrastructure.”

FirstHealth of the Carolinas Vice President of Information Systems David Dillehunt took a look at Epic’s remote hosting service as part of the health system’s overall evaluation of replacement vendors. (The North Carolina-based health system is scheduled to go live on Epic on July 1, 2017.) “It didn’t impact our decision to leave McKesson. We were forced to make a change when McKesson decided to sunset the Horizon platform. Epic had not yet gone live with their first remote-hosting customer, so we elected to do the traditional on premise implementation. However, I would bet that, like most things Epic chooses to do, it will do this well and be able to deliver a solid, reliable hosting platform,” Dillehunt explains.

“I do think this will be very interesting to many potential new clients, and possibly to some older clients as well,” he adds, “particularly where there may be issues with space, power, off-site backup availability, etc. I for one do not feel that remote hosting is the magic answer, but I do believe it is one of many and should be evaluated just like any other major choice.”