The White House will ask Congress to approve $1 billion for President Obama’s so-called “cancer moonshot.” Some of the areas to be funded within HHS are early detection via genomics, enhanced data sharing among institutions, and a virtual FDA Oncology Center of Excellence to review new combination products. 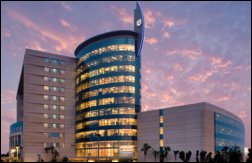 From Judo Chop: “Re: Florida Hospital and Athenahealth. This is part of the December announcement by its parent company Adventist Health System selecting Athenahealth. Florida Hospital will replace a combination of Epic ambulatory EHR that’s used in a handful of clinics, Cerner ambulatory EHR, and Allscripts (the old Misys product) PM. Most of the rest of AHS is using NextGen’s EHR/PM.“ Adventist announced in December that it will be deploying Athenahealth’s PM/EHR to 1,600 employed physicians.

From Polecat: “Re: Meaningful Use hardship exception. The new form doesn’t even ask the EP or EH to submit documentation of their claimed reason.” Correct. I think we can assume that this wink-wink form means CMS will allow anyone to avoid EHR penalties. MU is an embarrassment to everyone involved at this point and even the government is trying to distance itself from it. Just check “EHR Certification/Vendor Issues” and you’re done. 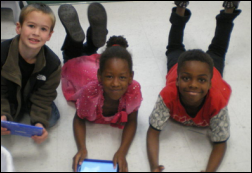 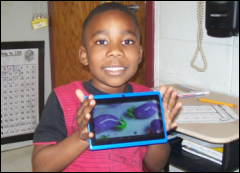 Mrs. Haley from Georgia couldn’t wait to send photos of her special education and gifted students using the three tablets we provided in funding her DonorsChoose grant request. She took these photos the day they arrived, where she had already installed reading and testing apps.

Also checking in was Mrs. B from North Carolina, who just got word that we had funded her request for science activity tubs. She says, “I couldn’t believe the email I received with information about my project … I yelled out loud and other staff members came to my classroom to see what was going on … I try to purchase what I can, but it seems as if my money is not going very far these days. Thank you very much from the bottom of my heart. You have made one teacher very happy … You will never know if a future mineralogist, petrologist, or geologist will be inspired by these kits!”

I was thinking today: has anyone actually ever heeded the warning to, “If this is a medical emergency, hang up and dial 911” after hearing those boring, time-wasting phone tree warnings when calling everyone from a dermatologist to a drugstore?

PatientSafe Solutions has mobilized clinicians and redefined clinical workflows for more than a decade. Meet our team in Booth #4257 to learn how our Clinical Communications platform improves patient care and satisfaction while decreasing costs. Meet us at HIMSS. Our team can’t wait for HIStalkapalooza this year. Look for us at the event to get your picture taken for the 2016 HIStalkapalooza video! 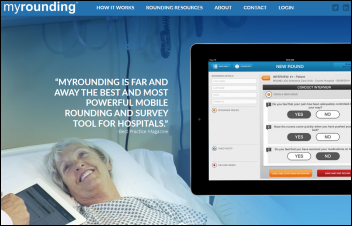 Aetna announces that its profit jumped 38 percent in the most recent quarter, mostly due to its Medicare and Medicaid business, but says it lost money on its exchange-issued policies and warns that it has “serious concerns about the sustainability of the public exchanges.”

Alphabet, the recently formed parent company of Google, surpasses Apple as the world’s most valuable company after reporting impressive numbers in its first detailed report. Alphabet made $4.9 billion in profit on $21.3 billion in revenue for the quarter. Share price jumped 8 percent on the news, raising the company’s market capitalization to $559 billion.

Sunquest parent Roper Technologies reports Q4 results: revenue flat, EPS $1.82 vs. $1.85, missing estimates for both and issuing 2016 guidance below expectations. The CEO said in the earnings call, “We think we will have mid-single digit organic growth in Medical throughout 2016 and we think that will get stronger as the year goes on. Sunquest has a number of version changes and software release updates that are rolling out in the second half that will be quite beneficial. And then Strata, Data Innovations, and SoftWriters which are growing rapidly, will become organic in the second half. Verathon and Northern Digital are going to continue to grow at a relatively high rate in 2016. And then we closed on January 7 the CliniSys acquisition in the UK, which is a European hospital laboratory software provider, and it will add to our acquisition sales growth in 2016.”

A New York Times article questions whether it was wise for the struggling Theranos to hire star litigator and company director David Boies as its legal representative, given that he would be representing Theranos management as a lawyer while his responsibility as a director is to the company’s shareholders. It concludes,

The potential for conflict is particularly great. What if Ms. Holmes resists changes that would be in the interest of shareholders? What if the board decides that it is time for her to go — and she stands her ground? The board could do little more than throw up its collective hands under the current governance structure. Mr. Boies and the other outside directors could resign in protest. But why would anyone, particularly Mr. Boies, be a director on a board that lacked the power to make fundamental changes? Indeed, what is Mr. Boies thinking? He may be paid lots of money for his roles, but for someone so successful and savvy to put himself in a position that is bound to be problematic is puzzling.

Meanwhile, Theranos finds another foot to shoot in indefinitely delaying its October promise to allow Cleveland Clinic to validate its technologies and insisting that it won’t publish anything about those technologies in peer-reviewed journals until it receives FDA approval for all 120 of its tests. 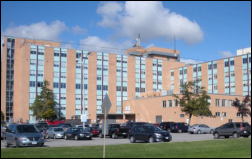 Craneware signs a $7.5 million contract with an unnamed hospital operator. 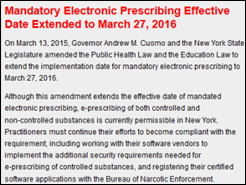 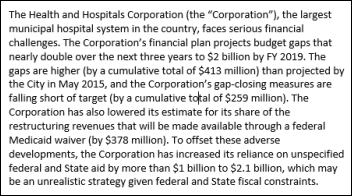 New York Mayor Bill de Blasio hires a consulting firm to figure out what to do about the city’s 11-hospital Health + Hospitals Corporation, which despite extensive city support is expected to run a deficit of $2 billion within the next three years. The health system hopes to convince more patients with commercial insurance to use its facilities than those of its competitors, all of which have similar ambitions. 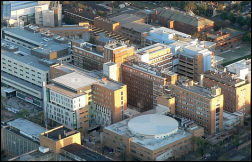 A study finds that mobile text messaging increases medication adherence rates in chronic disease patients from an assumed baseline of 50 percent to 68 percent, although the sites that are screaming this out as big news failed to note that:

This is not newsworthy other than the fact that it was published in JAMA Internal Medicine, where it will reach a wide audience. It’s also surprising that the journal misspelled the name of the Johns Hopkins Bloomberg School of Public Health in its author affiliation section. 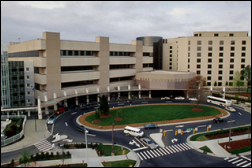 Duke University Health System (NC) reports making a record profit of $355 million for 2015, explaining that, “For the three or four years leading up to this past year, we had made a series of investments in facilities and information systems that helped to relieve capacity constraints limiting growth … With our new IT capabilities, we are able to better manage care across the spectrum and become more efficient in that way.” The system said it made a lot of money by buying up oncology practices to increase inpatient volume. 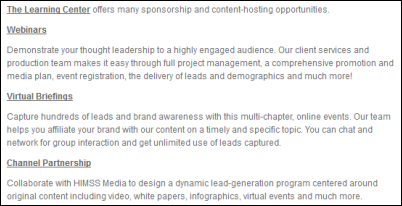 I received a survey link from HIMSS about its Learning Center, which sells thinly disguised advertising via its HIMSS Media business. Being a member of HIMSS means being inundated with its vendor-sponsored pitches, in this case disguised as “education,” where high-paying vendor members pay dearly to be hooked up with low-paying provider members in the “ladies drink free” business model.

The Virginia Tech professor who led the study proving that the water in Flint, MI contains dangerous levels of lead says public science is broken as university faculty members are pressured to get funding and to become famous. He explains, “Where were we as academics for all this time before it became financially in our interest to help? … Science should be about pursuing the truth and helping people. If you’re doing it for any other reason, you really ought to question your motives … Everyone’s invested in just cranking out more crap papers … when you reach out to them, as I did with the Centers for Disease Control and Prevention, and they do not return your phone calls, they do not share data, they do not respond to FOIA … every single rock you turn over, something slimy comes out.”

A Congressional investigation finds that despite the patient-focused claims of since-fired Turing Pharmaceuticals CEO Martin Shkreli, the company was gloating with delight at the profits it would make by jacking up the price of ancient drug Daraprim by 50-fold.

Weird News Andy titles this sad story “Out of the frying pan and into the fryer.” A patient with mental illness jumps out of a moving ambulance while being transported from a hospital and is struck and killed by a driver who then fled the scene.