CMS proposes a rule that would allow qualified entities – of which 13 have been approved so far — to provide or sell Medicare and private claims data to providers to support quality improvement. Only two of the qualified entities report provider performance nationally — Health Care Cost Institute and Amino. Physician practices (or employers paying for their services) would be able to review all-payer data for their patients.

From Eddie T. Head: “Re: CHIME’s patient identifier challenge. A 100 percent match is unrealistic. Even in countries with a national medical identifier the accuracy is about 95 percent. The 100 percent goal will get in the way of creating a real solution nationwide.” 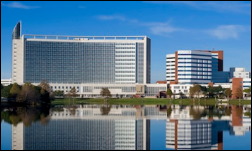 From AthenaAscending: “Re: Florida Hospital. Is replacing Epic’s PM/EHR with Athenahealth.” Unverified. 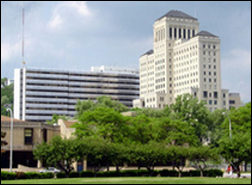 From Unintended Consequences: “Re: AGH in Pittsburgh. Its Epic acute go-live has created medical care havoc in peripheral LTAC and SNF facilities that had relied on Allscripts Sunrise for order entry and results retrieval. They are not on Epic and have resorted to a 1980s paper requisition and lab retrieval system. Doctors cannot see a list of their patients. AGH’s command team has informed doctors that stat orders must be called in and cases ordered as consultations won’t appear on the consultant’s patient list.” Unverified.

A reader asked me to post a single summary of my unsuccessful quest to obtain an electronic copy of my hospital stay information, which I’ve done here.

A surprising 80 percent of poll respondents aren’t fans of the idea of the ONC-published EHR star rating that Congress is considering. Jacob Reider commented that it’s a terrible idea and is outside of the government’s role. Ross Koppel says summarizing complex systems with a single star rating is simplistic. Barbara Hillock thinks such ratings would be misleading since they would be driven by the expectations of customers who don’t always follow the vendor’s implementation recommendations. Meltoots commented that ONC and CMS need to stop getting in the way of patient care with new programs.

New poll to your right or here: how have recent statements from CMS affected your perception of HHS/CMS/ONC?

Thanks to the following sponsors, new and renewing, that recently support HIStalk, HIStalk Practice, and HIStalk Connect. Click a logo for more information. 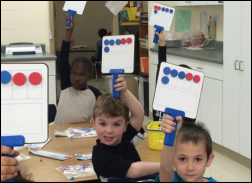 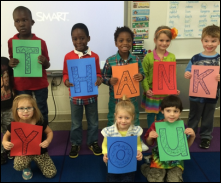 Mrs. Johnson from Illinois sent photos of her kindergarten class using the math tools we providing in funding her DonorsChoose grant request. She says, “It was so generous of you to help us succeed in getting some of the tools we need to make learning math engaging and fun! The look in these kids’ eyes when I tell them we have something new that will help us learn is motivation for me. I couldn’t have provided these materials on my own and appreciate the support you have given.”

Epic consulting firm BlueTree Network donated $1,000 to secure a spot at my CIO lunch at the HIMSS conference, which allowed me to fully fund these DonorsChoose teacher grant requests with the help of matching funds:

I have received over 1,200 requests to attend HIStalkapalooza, so I’m closing signups Monday. Sign up now or never. I’ll be able to invite most of the people who signed up. We’ll be handling invitations, RSVPs, reminders, and electronic check-in through Eventbrite this time and I expect the invitation emails will go out this week. This is where the annoying part of throwing a free party begins as it does every year when I vow that this year’s event will be the last because of the time and energy it requires: 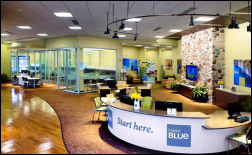 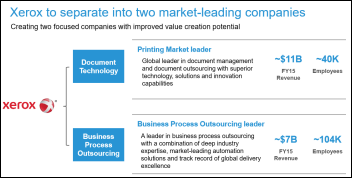 Xerox will split itself into two companies, responding to pressure from activist investor Carl Icahn to separate its $11 billion document imaging business from its $7 billion business process outsourcing. Xerox, which acquired Affiliated Computer Services for $5.6 billion in 2010 and will now basically spin it back off, has 104,000 employees who will be part of the new BPO company. Xerox announced Q4 results with the announcement: revenue down 8 percent (its 15th consecutive quarter of declining sales), adjusted EPS $0.32 vs. $0.31, beating earnings expectations. 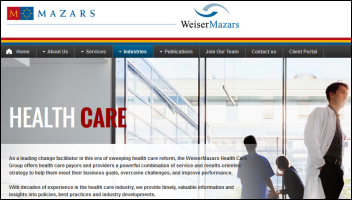 Quality Systems (NextGen) announces Q3 results: revenue down 1.7 percent, EPS $0.16 vs. $0.16, missing on revenue but beating on earnings. Shares dropped nearly 20 percent Friday on the news. Above is the one-year share price of QSII (blue, down 20.7 percent) vs. the Nasdaq (red, down 1.34 percent). Five-year performance looks a lot worse, as Quality Systems shares dropped 67 percent as the Nasdaq gained 67 percent. 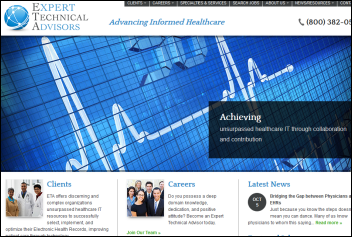 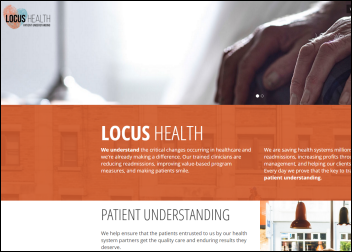 Philadelphia-based orthopedic practice The Rothman Institute and the University of Virginia Health System participate in a $4 million funding round for Locus Health, a remote care management company of which both organizations are customers.

Meditech publishes its FY2015 annual report. Revenue was down 8 percent for the year (“primarily due to lower product bookings”) and net income dropped from $124 million to $70 million. Neil Pappalardo owns about $450 million worth of shares.

Recondo Technology launches MySurePayHealth, which allows patients to estimate their out-of-pocket cost for a given procedure.

An emerging technology site profiles Valdic co-founder and CTO Drew Schiller as part of its “Today’s Entrepreneur” series, in which he lists his top three lessons learned:  (a) if someone isn’t interested in paying for your product, ask them what they would pay for; (b) reputations follow you, so treat everyone well; and (c) we are so fortunate to be living in an era where it is this easy to start a new company and iterate on ideas. 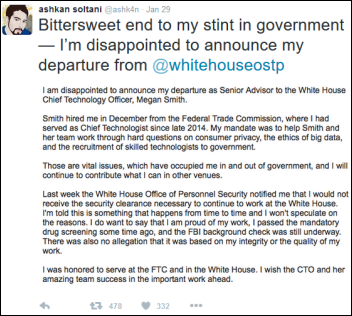 Ashkan Soltani, senior advisor to White House CTO Megan Smith on loan from the Federal Trade Commission, announces that he has effectively been fired after just six weeks on the job when the Office of Personnel Security denies his security clearance. Soltani, whose White House assignment involved privacy, data ethics, and recruiting technologists for government service, previously won a Pulitzer prize as part of the Washington Post investigative team that revealed the extent to which the National Security Agency spies on American citizens. 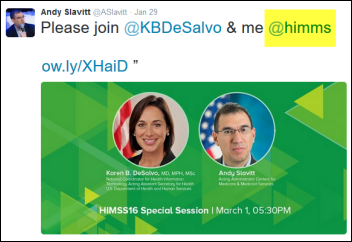 This might be the highest-profile bungling of the HIMSS acronym. Pedantic grammarians such as myself smugly note that HIMSS and HIPAA are “acronyms” as opposed to “initialisms” (acronyms are sounded out as words, while initialisms are pronounced as their individual letters, as in “CIA” or “IBM”). 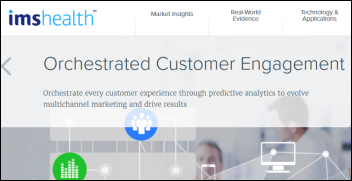 Scientific American’s “How Data Brokers Make Money Off Your Medical Records” contains no new information, but gives the public a glimpse at how companies are buying and selling their de-identified medical information. It mentions IMS Health, which takes in $2.6 billion per year by combining and repackaging information on 500 million people worldwide and then selling insights to drug companies and other to help them target sales. It repeats the now-obvious concept that it’s not hard to re-identify people by linking multiple databases. Drug company Pfizer spends $12 million per year to buy health data, but even its own analytics director says patients own their data, should be told how it’s being used, and should be given the ability to opt out of data that’s being collected for purely commercial purposes.

A Fast Company article describes the use of robots in long-term care, giving as an example Luvozo’s SAM “robotic concierge” that uses remote care staff. 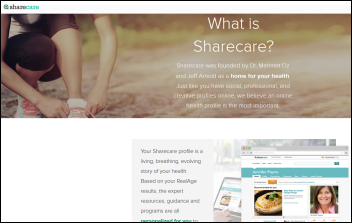 A good interview with WebMD’s dethroned founder Jeff Arnold, now CEO of Atlanta-based Sharecare, describes how the company uses individual results from its acquired RealAge health questionnaire to push content to users. Sharecare also offers personal health consultations via its AskMD app and publishes a voice-analyzing app to detect stress. On the downside, the company’s co-founder is the pseudo-medical huckster Dr. Oz.

Kaiser Health News describes the enthusiasm patients of Newport Orthopedic Institute are expressing for the empathetic, automated post-surgery daily emails they receive from the practice’s HealthLoop system. The article provides an example of a knee surgery patient who responded to a system-generated, emailed question about calf pain, which triggered his doctor to see him immediately and diagnosis his dangerous blood clot. 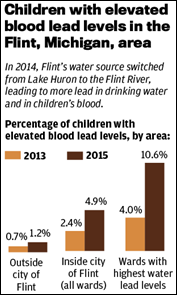 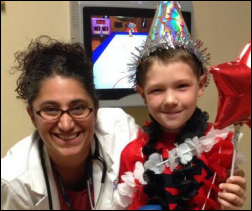 The Hurley Medical Center pediatrician who uncovered the human effects of the Flint, MI water crisis credits the hospital’s Epic system and EHRs in general for allowing her to quickly discover the increasing number of children with high levels of lead in their bloodstream. “If we did not have Epic, if we did not have (electronic medical records), if we were still on paper, it would have taken forever to get these results,” says Mona Hanna-Attisha, MD, MPH. She cross-referenced the abnormal blood levels to home addresses using geographic information system software to prove what was happening despite the denials of state officials. She is also adding an Epic flag to allow doctors to track those children for lead poisoning symptoms that can take years to emerge. Note once again the key involvement of a doctor trained in public health when discovering and responding to a regional crisis. 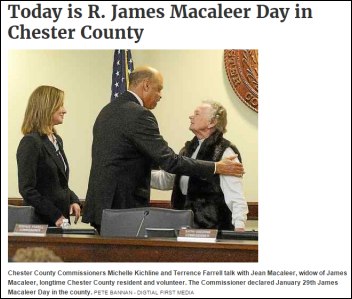 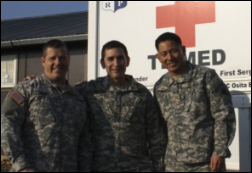 The US Army Reserve highlights the actions of three members of the 345th Combat Support Hospital of Jacksonville, FL who are deployed to Kosovo and who saved the life of a motorcycle accident victim while on leave in Greece. Those involved were Major David Whaley, who is a doctor of pharmacy; Colonel Edward Perez-Conde, brigade surgeon; and Major Kirk Shimamoto, a doctor of dental surgery. Perez-Conde says he considered using a pocketknife and ball point pen to relieve the victim’s pneumothorax, but, “we didn’t know how the police would react to a medical procedure using a pocketknife and we certainly didn’t want to go to jail.” 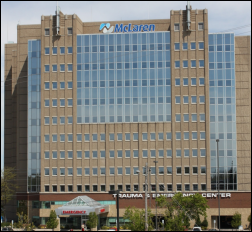 Flint-based McLaren Health Care (MI) will centralize its 13 billing and collections offices, saying it lags in standardizing its revenue cycle processes but hopes it can increase revenue by $30 million by reducing denials and increasing collections. The health system also says it is working on integrating Cerner’s EHR and patient billing systems.

An article describing how ad-supported publishers are “freaking out” over their readers using ad-blocking software provides an example in Modern Healthcare. The Interactive Advertising Bureau calls AdBlock Plus, which has been downloaded 500 million times, “unethical” and “immoral,” declining to note that publishers are producing content that few people are willing to pay for in any form, including by the viewing of ads.

A New Hampshire jury awards $32 million to a former Walmart pharmacist who claims she suffered gender discrimination in being wrongfully terminated for notifying the state’s board of pharmacy about the large number of errors the pharmacy was making, some of which the store manager inappropriately blamed on her. Mauren McPadden, who had worked for the company for 18 years, also says Walmart violated her HIPAA rights by accessing her PHI and telling co-workers that she had suffered a nervous breakdown. Walmart claims it fired her because she lost her pharmacy keys.