A $1 million CHIME prize attempts to position the industry for patient identification success.
By @JennHIStalk 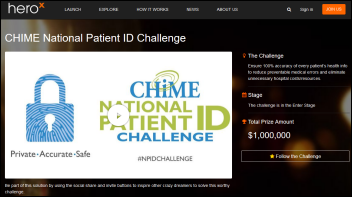 A perfect storm of healthcare concerns around near-ubiquitous EHR adoption, a resultant need for interoperability, patient safety and privacy, and federal stonewalling have swirled into an industry-wide conversation around the need for a national patient identifier.

Such an ID would, in theory, offer all providers a safe, accurate, and private way to identify patients no matter where they receive care. Correctly matching the right patient record to the right patient across care locations has the potential to save the US healthcare system money and lives.

Intermountain Healthcare CIO Marc Probst estimates that his Salt Lake City-based organization spends as much as $5 million each year on administrative and technology costs related to accurately matching patients with all of their medical records. Minnesota-based Mayo Clinic has faced similar financial fallout, paying out up to $1,200 per misidentification, according to a 2014 ONC report.

Probst puts Intermountain’s patient-matching accuracy at 95 percent, above the industry norm of 85 percent. Similar rates show up at Kaiser Permanente, though that number falls to the mid-50s when records are shared between its regions and outside of its Epic system. Some estimates put identity errors in medical records at 14 percent, accruing to an annual estimated spend of almost $9 billion.

But wait, there’s more. A 2012 CHIME survey found that nearly 20 percent of its members could attribute at least one adverse medical event to incorrect patient matching.

That’s where the rubber hits the road. Adverse medical events equate to administering the wrong medication to the wrong patient, performing unnecessary procedures on misidentified patients, and burdening incorrectly identified patients with the hospital bills of someone else. Access to another patient’s health data is also of concern, as the steady stream of healthcare hacks over the last few years shows no signs of slowing down.

While the 2012 CHIME data might be dated, the statistic strongly shouts that the healthcare industry has a moral obligation to roll out an accurate national patient ID. While such an ID has never been developed, it’s not for lack of trying. There was talk of a federal patient identifier initiative when Congress passed HIPAA in 1996, but that was ultimately shot down by the industry’s privacy contingent, resulting in a 1999 law prohibiting federal funding to create the identifier.

What’s an industry in dire need of a solution to do? While there’s talk of removing the federal prohibition within the next year or two, industry stakeholders have taken the matter into their own hands and turned to the private sector for a solution – one fueled by cold, hard cash.

The CHIME National Patient ID Challenge, originally announced last fall, made its formal debut earlier this month, exciting just about everyone who has ever taken part in the national patient ID debate. The association, which has partnered with crowdsourcing company HeroX, is looking for innovators from around the world to develop a patient ID solution that:

ONC, National Patient Safety Foundation, AHIMA, and the AMA have endorsed the contest, which will award the winning solution $1 million. Over 80 entrants in seven countries have already signed up. With submissions due April 8, the clock is ticking for entrepreneurs and established companies to finalize their ID innovations. The winner will be announced February 19, 2017 at the CHIME/HIMSS CIO Forum in Orlando.

“We recognized that this is a real challenge,” says Intermountain’s Probst, who is also chair of the CHIME Board of Trustees. “We can’t identify people as well as we’d like to and there’s security issues around that. We’ve become well aware of this over the years, and talked significantly about it for probably the last five.”

Probst attributes the timing of the competition to learning about HeroX. “We discovered there was this creative way of looking at a problem – a much broader strategy than the healthcare industry has traditionally employed. When we heard from HeroX and XPrize founder Peter Diamandis and got aligned with the HeroX team, we thought this is something we could create a challenge around, and CHIME could really get behind.”

“We’ve come to understand that it’s more difficult to model a challenge like this than any of us realized,” he adds, “and I don’t think that’s necessarily unique to patient identifiers. You’re going to throw a million dollars on the table, so you hope that the winning solution is going to be really effective.”

The $1 million prize has obviously set a fire under the healthcare community. Some wonder where the winnings will come from. “CHIME will be looking for people to partner with to help fund this – organizations that would like to have their name associated with it,” Probst explains. “That’s actively going on. The CHIME board will make sure it gets funded one way or another.”

With so many entrants — from credit bureaus to startups to clinicians to big business — committing to the contest in just over a week, competition will surely be stiff once submissions are reviewed and the chosen few move on to the “Concept Blitz” round in May. 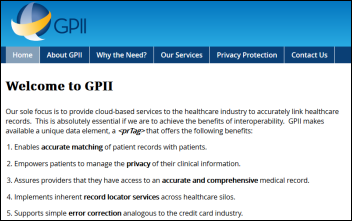 “We’ve been working on this since 1995,” says Barry Hieb, chief scientist at not-for-profit Global Patient Identifiers. “There’s been a long pause on this issue, but now there is renewed focus due to the race for interoperability. There’s a desperate need to identify patients correctly. Between 100,000 and 400,000 people die each year due to medical misidentification. That’s what keeps me awake at night. That’s not acceptable.”

Hieb, who anticipates signing GPI up for the challenge, envisions rolling out the winning solution at several pilot sites for a year or two, and then making it publicly available. “It could be a card, an app, a USB drive … the key is determining what information is accessible,” he says, adding that his other big concern is management of the solution once its 15 minutes of fame have worn off. “We’ll need to sit down with CHIME and other stakeholders to determine who is trustworthy enough to run this capability in perpetuity.” 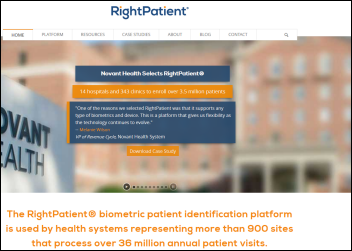 Michael Trader, CEO of biometric patient ID platform vendor and contestant RightPatient, echoes many of Hieb’s concerns. “Meaningful Use has been a big impetus for this. Now we’re at a stage where the next goal is interoperability. Combine that with the new influx of covered consumers and you’ve got to help providers avoid sharing dirty data.”

“We feel strongly that our current technology is the ultimate solution for this problem,” he adds. “The winning solution will be strong on the technical side, but will be practical, too. Providers will ultimately drive the adoption, which will in turn drive patient adoption. When all’s said and done, it’s got to be scalable and focus on multiple touch points.”

May the Best – Most Accurate – Solution Win

Probst seems confident that this competition will bring a viable solution to market. “We need these participants to figure this out,” he says. “I don’t know that it will be an algorithm. It could be a biometric, or a combination. Whatever it ends up being, we’d like to get 100 percent accurate identification. It has to be something that makes economic sense and can be reasonably introduced into the industry and afforded. All those are aspects of the challenge.”

“To the patient, this solution will enable your provider to access your medical records when you walk up to the registration desk. You won’t have to clarify. They’ll know it’s you when they create a bill or record or test or referral. We’re going to get it right.”