Lockheed Martin is known in health IT circles as having created the first CPOE system in the early 1970s when the company was operating as Lockheed (it merged with Martin Marietta in 1995 and changed its name to Lockheed Martin) but the company sold the product to Technicon in 1971, when it was named TDS. Lockheed Martin recently won the VA’s appointment scheduling system contract, bidding Epic through its recently acquired Systems Made Simple subsidiary.

With the acquisition, Leidos will become the #1 government IT contractor by revenue, with annual sales of more than $10 billion. 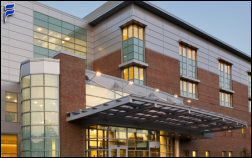 From Smartfood99: “Re: Frisbie Memorial Hospital (NH). Cerner couldn’t flip a MedSeries4 hospital – they are going with Meditech 6.1.” Frisbie’s CEO says they wanted a system that would work for their 112-bed hospital sold by “a vendor we could trust.”

From Eddie T. Head: “Re: integration with Epic’s hosted systems. I would be surprised if Epic ever agrees to host third-party products. As far as I know they have always maintained that they will host the Epic infrastructure of servers, but they will not take on the role of a customer’s IT department for anything else. If the server-to-server integration comment is correct, then it sounds like sabotage (either by malice, or by incompetence) on the part of McKesson.”

A reader asked us to find out what’s going on with RxNorm updates and code changes, which they say is causing quality measures to fail because CMS has not updated its eCQM value sets with the new codes. Jenn asked the NIH/National Library of Medicine what happens with VSAC and quality measures when RxNorm is updated:

The short answer is, nothing. But it really has nothing to do with RxNorm or any other code system. ONC/CMS (back in 2012) statically bound all of the CQM value sets to their respective code systems, so the content of those value sets is legally locked to whatever versions of code systems specified by an update. So for example, the last CQM update back in 2015 used Feb 2015 RxNorm I believe. Thus, the problem for implementers who want to use the newer, better content (Lovenox as injectable heparin) to meet the treatment criteria for a measure, but are bound to use an earlier version of RxNorm. This has been a known problem for years. The real issue is providers vs. implementers. Providers, of course, want the new content as it benefits them meeting the care goals. Implementers see too much risk in updating/floating value sets dynamically, especially those that are authored as list (extensional) to begin with rather than as rules (intentional).

This topic is known to CMS and ONC—the use of a static value set associated with each measure means that dynamic code system changes post-publication will not be reflected in the value set. To this date, we have provided the guidance that it is permissible to map where appropriate to a similar code. Where there are no similar codes, however, there will be a gap in the measure. Rob McClure, cc’d above, has been working on a proposal with CMS to provide an interim update to the value sets in the middle of the measurement period with additions only that will fill out dynamic code changes (and potentially correct errors) that affect real-world value set and measure performance.

In response to the reader’s example of CMS not updating the code sets for Lovenox as an injectable heparin that causes the VTE measure for anticoagulant therapy to fail, ONC/NLM consultant Robert McClure, MD responded:

If I was to wildly guess (a dangerous thing to do with you playing man-in-the-middle) perhaps she is not familiar with the expectation that data submitted in support of meeting an eCQM may at times require mapping, say from a code representing a branded drug (like Lovenox) to the “general form” (Enoxaparin) using RxNorm as the submitted code system. Or some entity that she’s relying upon is not getting this job done well.

There is the possibility that Sanofi (they make Lovenox) has come out with a brand new formulation of enoxaparin that did not get into the value set. If that is the problem, then this is exactly the sort of thing we are working to determine a better solution for implementers then simply “mapping to something close that is in the value set." If she is aware of such things then I encourage her to provide very specific evidence of this so we can design solutions that really work. She should do this by participating, like thousands of her colleagues have done, in the CMS/ONC eCQM JIRA site (http://jira.oncprojectracking.org) and report the specific issues so we can get to specifics.

The HCI Group donated $1,000 to participate in my CIO lunch at the HIMSS conference, with which I funded these DonorsChoose grant requests: 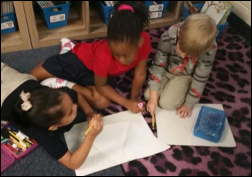 Ms. Osborne says her South Carolina elementary school class is using the math games and materials we provided in their math centers.

I was excited about Black Sabbath’s final tour, but video from their “The End” tour stop in Chicago shows Ozzie singing so wildly off key that he ruins all the songs they otherwise played excellently. I think they’re making the right decision to hang up their inverted crosses after nearly 50 years.

Amplify the impact of your patient touch points with Healthwise health education, technology, and services. Easily integrated into episodic care, care coordination, automated programs, and patient portals, Healthwise solutions give you the ability to deliver tailored, meaningful experiences. Since 1975, Healthwise has been driven by our non-profit mission to help people make better health decisions. Visit us on the HIMSS show floor in booth #3617 and at our kiosk in the Population Health Knowledge Center. To find out more about Healthwise or to schedule a one-on-one meeting, visit www.healthwise.org/himss16. 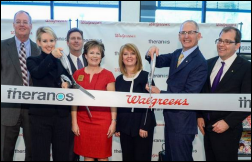 CMS inspectors have found problems at the Northern California laboratory of Theranos, according to unnamed insiders. Meanwhile, a Wall Street Journal investigation finds that not only is Theranos using its fingerstick technology for just one test, it’s also sending some of its samples out to reference labs instead of running the tests itself, apparently losing money on each (Theranos sells patients a test for $7 while paying UCSF $300 to run it). The article also reports that Walgreens has met with the company several times since October to discuss concerns about the Theranos stations in its California and Arizona drugstores and isn’t satisfied by the company’s responses. The since-fired CFO of Walgreens approved a loan of $50 million to Theranos without involving the drug company’s senior clinical executives and signed an agreement that Walgreens can’t easily escape from, although a negative CMS report might give them reason. 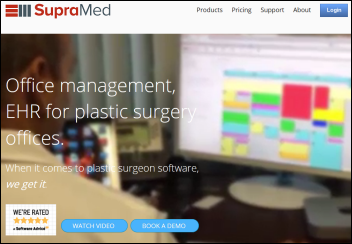 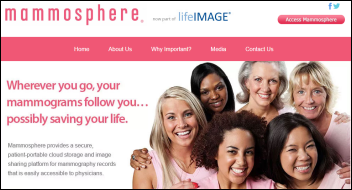 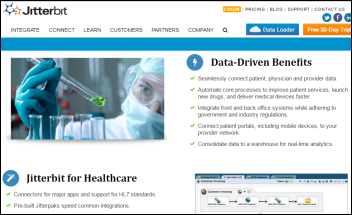 Enterprise integration vendor Jitterbit, which offers a platform for developers to build and expose APIs, raises $20 million in a Series B funding round. It lists among its customers Dignity Health, Eisenhower Medical Center, and ZirMed. Prices range from $2,000 to $6,000 per month.

Kaiser Permanente will open an 800-employee customer service center and a 900-employee IT center in metro Atlanta. 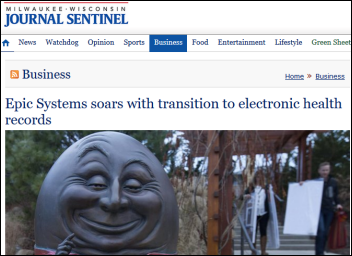 The Milwaukee paper profiles Epic with a potpourri of recycled facts: 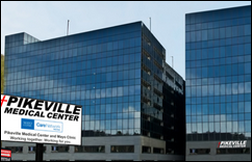 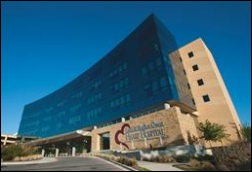 Cerner Chairman and CEO Neal Patterson notifies shareholders via an SEC filing that he was just diagnosed with a “treatable and curable” soft tissue cancer and will therefore be traveling less and attending fewer meetings as he undergoes treatment.

Nashville healthcare entrepreneur R. Clayton McWhorter, who served as CEO of HCA in the 1980s, died Saturday at 82.

The California HealthCare Foundation will cease publishing its iHealthBeat daily technology news digest as of February 1 because “its exclusive focus on health IT no longer aligns with the programmatic focus of our work.” The newsletter was managed by The Advisory Board Company under contract to CHCF. I’m surprised that HIMSS didn’t buy it and fold it into its vendor-friendly publishing arm. 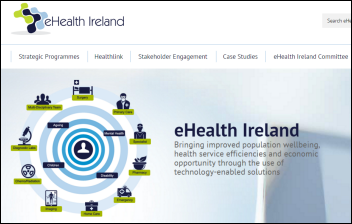 EHealth Ireland announces that available funding will allow it to increase its 288 FTE headcount by 47. 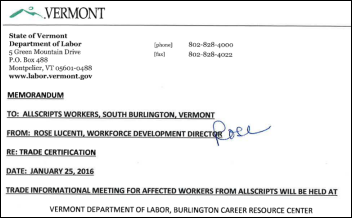 Vermont’s Depart of Labor notifies former and present employees of the South Burlington, VT office of Allscripts that they are eligible to apply for re-employment services if laid off.

CMS encourages development in state Medicaid claims processing systems by permanently extending a 90 percent federal funding match for those systems. CMS is spending $5 billion per year on state Medicaid IT and estimates that 30 states are redesigning their Medicaid eligibility or claims processing systems. Cedars-Sinai CIO Darren Dworkin tweets that it’s a much bigger vendor opportunity than any population health app although it’s likely open only to large government contractors. 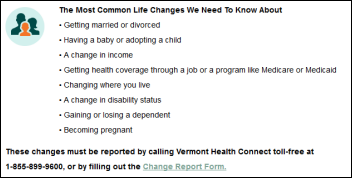 Blue Cross Blue Shield of Vermont calls for an independent review of the state’s Vermont Health Connect insurance exchange as errors force it to once again turn off the ability to enter “change of circumstance” situations. The state blames original contractor CGI and a consulting firm it hired that has since gone out of business. BCBS says exchange problems have prevented some of its customers from renewing their policies and doesn’t allow the company to reconcile its customer accounts. The exchange cost over $200 million to develop, nearly all of that paid by federal taxpayers.

A New York Times article describes the security-required modifications that are required before government officials (including the President) can bring mobile devices into the White House. A general who bought one of the first iPads in 2010 says DARPA technicians removed the device’s cameras, wireless chips, location sensors, microphones, and on-board storage capabilities, leaving him with “a pretty dumb iPad.” The article recounts a 2013 interview in which former VP Dick Cheney revealed that when his replacement defibrillator was implanted in 2007, his cardiologist insisted on disabling its wireless capability for fear someone might use it to assassinate him.

A Congressional Budget Office report finds that the federal government spend $936 billion last year on Medicare, Medicaid, and ACA subsidies vs. $882 billion on Social Security. The report warns about increased spending on mandatory programs and predicts that the federal deficit will increase.

CMS posts its 2017 Medicare EHR Incentive hardship exception application, due March 15 if EPs are involved or April 1 for just eligible hospitals, with these allowable reasons: 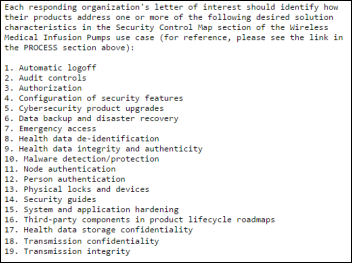 Titus Regional Medical Center (TX) finally regains access to its EHR more than a week after its servers were locked by ransomware. The hospital says it did not pay the money demanded and that the FBI is investigating. The Dallas Area Rapid Transit Authority was also recently infected with ransomware that demanded payment of $63,000 to restore access to encrypted files. DART declined to pay and was able to recover most files from backup copies, but some information was lost and some online services remain unavailable. The FBI stated a few weeks ago that it might make sense for some businesses to pay the ransom demanded, which was the case with at least one police department and a sheriff’s office that have paid to get their files back. The hackers behind the CryptoWall ransomware creation tool recently upgraded their product with a redesign of the ransom note. 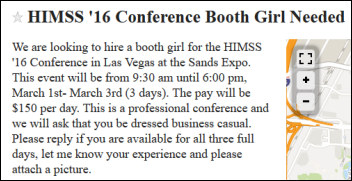 Apparently the unnamed health IT vendor who ran this ad in the Las Vegas Craigslist values its customers about as much as it does women in seeking a “booth girl” whose primary attribute is appearance.

The inquiring mind of Weird News Andy wonders whether a drug that can cure fear will work in cases of pharmacophobia, iatrophobia, and phagophobia.