The bumpy road McKesson and its users have found themselves on in the transition from Horizon to Paragon.
By @JennHIStalk 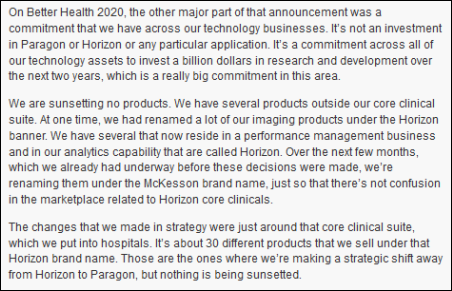 It’s been four years since Atlanta-based McKesson announced its decision to shift resources away from its Horizon Clinicals product line — known for serving several hundred large facilities of 300 beds and up — and to make Paragon its centerpiece hospital IT system.

The move — part of the company’s broader Better Health 2020 initiative of increased investment, research, and development of Paragon — was seen by the industry as an attempt to streamline McKesson’s technology solutions to better serve a customer base that was becoming increasingly vocal in its need for an integrated offering. 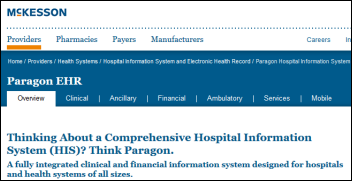 McKesson has faced an uphill battle in its attempts to convert Horizon customers to Paragon. Changes in leadership, rumored employee discontent, and user push-back have all played their part in McKesson’s attempt to remain competitive with scalable technology that can keep up with federal regulations, evolving payment models, and a customer base that seems to be jumping ship to Cerner and Epic in numbers the company didn’t anticipate.

The Evolution of Industry Reaction

Initial reactions to McKesson’s decision were tempered, with analysts and industry insiders coupling their wait-and-see attitudes with a healthy dose of skepticism regarding the company’s financial stakes. “On one hand, I laud MPT for coming clean on the challenges it has had with the development and support of the Horizon product,” Aspen Advisors (now part of The Chartis Group) Founder and Managing Principal Dan Herman said in a 2011 year-end assessment. “However, it appears that [McKesson’]s go-forward strategy is ‘déjà vu’ – a poorly thought-out approach to integrate disparate platforms, enhance a product that has experienced success in a focused marketplace (Paragon), and promise to customers that [McKesson] is committed to delivering a ‘fully integrated core clinical and revenue cycle IT system.’”

The situation wasn’t as positive after a few years and a few Horizon to Paragon migrations, both from an end user and company perspective. “As a customer, we have noticed that support and services have steadily declined since the Better Health 2020 announcement …. The average tenure of support employees supporting us has dropped severely with resignations,” noted one HIStalk reader and McKesson Horizon customer in 2013. “We have to run a gauntlet of triage and bottom-tier support before most of our issues are escalated to a rare senior resource. They are exerting pressure for us to migrate to Paragon while failing in their commitment to support us on Horizon. Actions speak louder than words and customers have been left to deal with the fallout.”

Fewer than one-fourth of respondents to an HIStalk reader poll in December 2011 said they had a positive reaction to McKesson’s Better Health 2020 plan. Three-quarters of respondents to a September 2012 reader poll said McKesson’s healthcare IT position had worsened in the past year, with one respondent commenting that the plan to move Horizon users to Paragon was, “Nothing more than puff-piece marketing. There was no tangible follow-up with their closest clients to show them concrete plans. The traditional, ‘Trust us because we’ve worked so hard together all these years’ and the implications of ‘we are too big to fail’ just do not hold water.”

The corporate side of the story correlated with user frustration, as McKesson leadership shuffled and Horizon employees were urged to take jobs at RelayHealth, which expanded to over 1,000 employees in 2013. McKesson’s February 2015 earnings call offered a slightly rosier picture of the company’s migration attempts. Chairman, President, and CEO John Hammergren mentioned that the Technology Solutions division’s seven percent drop in revenue was in line with expectations of lower Horizon Clinicals revenue, and that the company was “in [the] middle of the game” in trying to migrate customers.

He added that, “As you think out two or three years, the EMR space and the transition away from Horizon will be more complete or complete, and we’ll see more results, we think, in terms of this pay-for-performance priority.”

Fast forward almost a year. Hammergren’s prediction of a transition away from Horizon seems to be coming true, though not necessarily with the outcome he had hoped.

“The move from Horizon to Paragon has actually been pretty painful for McKesson and for their customers,” says Coray Tate, vice president of clinical research at KLAS Enterprises. “That’s not a secret. It’s a little bit of a perfect storm that Paragon got caught up in.”

Paragon, Tate explains, has suffered not only from a Horizon customer base that was unenthusiastic about switching systems and wary of Paragon’s ability to scale to larger facilities, but also from bad timing. The leader in KLAS customer satisfaction rankings for small community hospitals was caught up in the rollout of Meaningful Use and the prospect of a switch to ICD-10. Toss in high-level leadership changes and the “perennial leader” found itself falling behind.

“They took a product that had really struggled,” says Tate. “They reset expectations and have actually done a really good job of developing on that. But now you’ve got all these external pressures that they haven’t been able to meet. Meaningful Use made EHRs become a physician tool, and so that part has been the biggest gap and they are having a hard time getting to the point where physicians are happy with it. That’s not unique to Paragon, but that is definitely one of Paragon’s struggles and one of the reasons why you’ve seen their scores drop in the small market.”

Tate’s insight into market forces have been playing out in Horizon facilities. Mike Jefferies, a former McKesson technical advisor who is now vice president of IS at McKesson customer Longmont United Hospital (CO), agrees with the Better Health 2020 strategy. However, he questions whether big Horizon customers are comfortable with the idea of migrating to Paragon.

“You’ve seen a huge consolidation in healthcare,” Jefferies explained in a February 2015 HIStalk interview. “That consolidation has favored EHRs that handle a larger scale, which in our market means Cerner or Epic. What a larger organization consolidates smaller hospitals and organizations, they certainly aren’t going to uptake that smaller community EHR.” 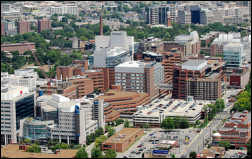 Vanderbilt University Medical Center (TN) is one such customer. It announced its move from Horizon – much of which it had self-developed as WizOrder and then licensed to McKesson in 2001 to create Horizon Expert Orders — to Epic in December 2015, with an anticipated go-live in 2017.

VUMC Chief Informatics Officer Kevin Johnson, MD, MS, who is spearheading the effort, says that its decision was certainly strategic, though the IT team was understandably disappointed to hear the Horizon/Paragon news. “We realized that McKesson was focusing on a different segment of the healthcare market with the Paragon system,” he explains. “Therefore, we had begun surveying the landscape to be proactive about the move at the same time that McKesson sent us the announcement.”

“We have enjoyed a long history with Epic as one of their first revenue cycle clients, dating back to 1995,“ Johnson adds. “We had made a decision to upgrade our revenue cycle and billing system to a more recent Epic version for inpatient and outpatient billing. We also have Cerner’s lab system. Our decision, therefore, was to migrate our revenue cycle/clinical/lab environment to Epic/Epic/Cerner or Epic/Cerner/Cerner. Paragon is a system constructed with a different size and complexity health system in mind. Both Cerner and Epic were good choices for us, and after a thorough evaluation, we chose Epic for our clinical system.”

Mike Lucey, founder and president of Paragon consulting firm Community Hospital Advisors, paints a more intimate picture of Horizon end user reaction. ”I work with the IT folks and the doctors, nurses, therapists, and revenue cycle folks that actually use the product. They take it personally. This is their product,” he explains. “It’s very hard for the users to get around the idea that McKesson is taking something away that they like and works for them and giving them something that for years and years has been pitched as not good enough for their needs. They feel like they had the rug pulled out from under them.”

In Lucey’s best estimation, between 50 and 60 Horizon customers are still evaluating their options and  “a couple hundred” are on Paragon, with half of those being migrations.

“It’s important to remember that frustration has a half-life,” he says. “People get frustrated, they get angry, they stomp their feet. They run around and they put out RFPs and they get their responses back. Then the reality of money sets in. I think that’s where we are now. How many phases are there to grief? You know, you have denial. They kind of get stuck on anger for a while. Then somewhere along the way there’s acceptance. I think that’s the phase this market has gotten to. Folks are recognizing that they need to make a rational decision with good information.”

The Positives of Paragon

It’s not all doom and gloom, as Lucey’s current Paragon customer estimates attest. He is quick to emphasize that Paragon works, though the definition of “works” is, as with all IT systems, at the discretion of the implementing organization.

“The underlying technology and the functionality of Paragon is effective. It can get the job done for hospitals and multi-facility organizations, but it has to be put in well. It’s an issue of accountability. You can find many instances of Paragon implementations where the product is working very, very effectively. The difference between where it’s effective and ineffective is ownership. If the hospital owns it, it works well. If they don’t, it usually stinks.”

Both Lucey and Tate believe that product development and overall quality will make or break Paragon. “They’re going to have to be able to get code out to increase the physician experience,” Tate explains. “The code quality of the releases has got to get better. There have been reports of things being buggy as releases have come out. Overall, it’s going to have to mature to more of a clinical solution, meaning that it’s easier and faster for physicians to use.”

Lucey agrees that McKesson needs to show its commitment to Paragon by improving code quality within a few months. He adds that the company will have to deal with employee challenges. “A lot of them are the same people that were previously doing that for Horizon. A lot of them are still upset. Can they change uniforms from Horizon to Paragon, pick up the mantle, and advocate for it? Make it better, support it well, and sell it effectively? I don’t think a lot of them can, quite frankly.”

Lucey’s insight into McKesson’s internal struggles is shored up by several HIStalk reader reports that McKesson has turned to offshore resources to tackle Paragon’s development and that the company has begun pitching its technology division to venture capitalist firms, reported privately to HIStalk by someone who claimed to have been present in one of the meetings. McKesson President Nimesh Shah was unavailable for comment due to the company’s pre-earnings quiet period through April 1.

McKesson’s commitment to Paragon will determine whether it will continue to meet user needs, remain competitive, and capture a significant share of the Horizon customer base that is being forced to seek an alternative from McKesson or its competitors.