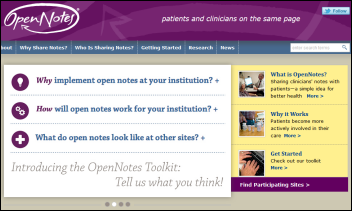 Five foundations, including the Gordon and Betty Moore Foundation and Robert Wood Johnson Foundation, provide $10 million to expand the reach of the OpenNotes initiative to give patients access to their visit notes. 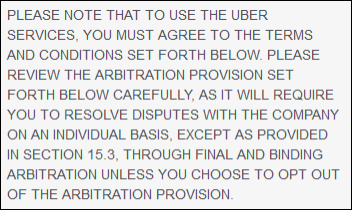 From Mutual Arbitration: “Re: arbitration clauses. Now Uber is doing them, only they are blasting them to the smartphones of their drives who have to tap ‘agree’ to keep driving. Leave it to Uber to get 400,000 agreements signed almost instantly.”

From Petal Pusher: “Re: another outrageous hospital billing practice. A friend who was admitted to a major NYC hospital says a clinical psychologist came to his bedside, introduced herself, and asked if he wanted to talk about how he was feeling. Sure, he said, so they spoke for 20-30 minutes. She came back a few days later. Surprise – this was charged to his bill even though it wasn’t told it would be billable, he didn’t ask for it, and it was never ordered for him. He thought it was part of the hospital service, for which they billed $7,700 per day.” I suppose the message here is that when you’re hospitalized, just answering the “how are you doing” question from some stranger who wanders into your room could trigger a bill. 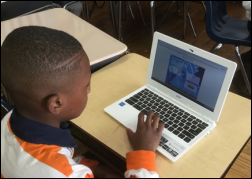 Mrs. Shaw reports that not only were her fourth graders named the top math class in her Pennsylvania school, two of her students were among the top individual scorers as well thanks to the Chromebook and accessories we provided for math practice via DonorsChoose. 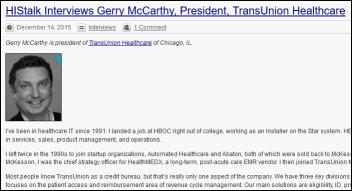 I sent the email blast and tweet on my interview with Gerry McCarthy late Monday afternoon. Gerry emailed me four hours later to let me know that he had already received over 300 emails, calls, and LinkedIn messages in response. I appreciate knowing that since, as I told Gerry in reply, HIStalk is to me just an empty room in which I sit while attempting to fill an empty screen each day in a quite personal way, so I don’t have a good view of what it looks like on the other side of that screen even though I’ve been doing it for nearly 13 years.

Here’s the inimitable Vince Ciotti and Frank Poggio doing Tuesday’s webinar, “CPSI Takeover of Healthland, Are You Ready?” You will no doubt be entertained by their wry humor even if you have no horse in that particular race. 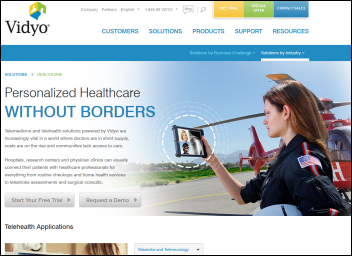 Telehealth and videoconferencing platform vendor Vidyo receives a $10 million investment from the venture capital arm of Kaiser Permanente, increasing its total to $163 million. 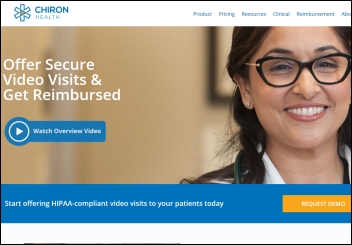 Dell is reported to be trying to sell the former Perot Systems for more than $5 billion to help pay for its EMC acquisition, which was previously rumored in early November and reported here. Dell acquired Perot for $3.9 billion in 2009 and is rumored to be talking to Tata, Atos, Genpact, and CGI about buying it. 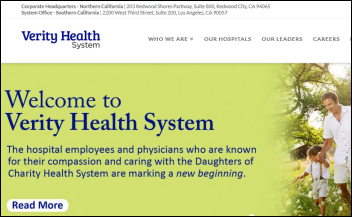 In a stellar example of how American healthcare is an ugly mix of compassion and profit-seeking, Daughters of Charity Health System (CA) receives a $260 million investment from a hedge fund that also has the option to buy the six-hospital system outright after three years.

Lisa Gallagher (HIMSS) and Arien Malec (RelayHealth) will replace John Halamka as co-chairs of the Health IT Standards Committee upon expiration of Halamka’s term in January.

Allscripts adds self-pay capability to its FollowMyHealth patient portal by integrating functionality of its Payerpath products. 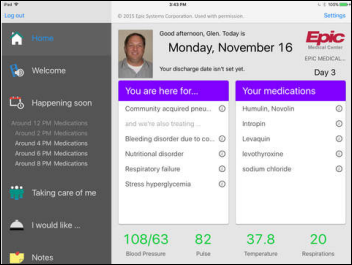 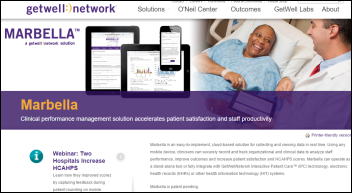 Microsoft will end support and updates for Internet Explorer 8 on January 12 but is selling custom support agreements for customers unable to upgrade their browser, many of which I would guess are in health systems. IE8 was released in March 2009, replaced by IE9 in March 2011.

A federal judge denies a motion brought by the Texas Medical Board that sought to dismiss Teladoc’s lawsuit against it, allowing the lawsuit to proceed. Teladoc successfully argued that the board’s rule that allows telemedicine sessions only after an initial face-to-face visit unfairly limits competition. 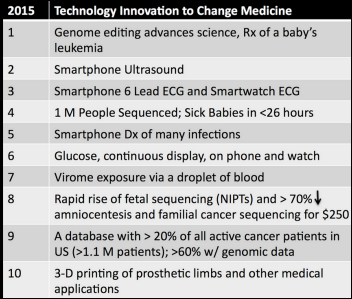 Eric Topol, MD lists his top developments from 2015 that will change medicine. 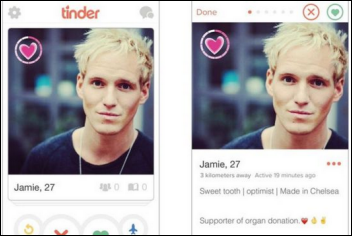 In England, dating app Tinder helps the NHS raise organ donation awareness among its younger users by suggesting they sign up as donors when they swipe a supporter’s photo.

A Wall Street Journal article recaps recent studies showing that patients resent doctors who spend a significant portion of their encounter working on a computer instead of making eye contact, suggesting that computers aren’t the problem but rather how they are physically positioned and how the doctors choose to use them. It will be interesting to see what happens as medicine shifts to newer graduates unaccustomed to looking up from their phones to see the actual world around them, or perhaps newer patients will be perfectly happy receiving their medical care from the equivalent of a Facebook post and reply.

An interesting New York Times article by Abigail Zuger, MD describes the common situation in which she uses around 10 information systems that each have their own password composition rules and expiration dates, forcing her to keep an index card listing them all in her pocket at all times. She adds, as the subject of the article suggests, that she’s seeing a “retro explosion of paper” as non-interoperable systems force reliance on hand-delivered paper or faxes. She describes what it’s like: “Who knows what the biblical stonemasons sang to themselves during work hours at their Tower of Babel? This is the soundtrack at ours: ‘What exactly did the kidney guy tell you to do?’ ‘Are you sure?’ ‘How did the ER explain that?’ ‘Could you just bring in the new pills next time?’” 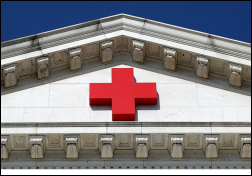 ProPublica digs into significant problems at the American Red Cross in an article called “The Corporate Takeover of the Red Cross” as the charity struggles in the fifth year under a leadership team that was mostly brought over from AT&T. The article says Red Cross has cut its payroll by a third, eliminated jobs, closed chapters in reducing their number from 700 to 250, alienated volunteers, and bungled several emergency response efforts to the point that some emergency planners have decided not to use its services. Surprisingly, its business of selling donated blood to hospitals lost $100 million in the most recent fiscal year because of revised clinical guidelines that reduced blood demand and its failure to adopt industry standard scannable labels. It plans to increase sales of its CPR training programs from $150 million per year to $700 million fizzled as actual revenue instead dropped. An internal survey found that only 35 percent of employees trust the organization’s executives — many employees call the charity “the AT&T retirement plan” — and volunteer satisfaction dropped 20 percent in one year to 32 percent. The CEO of the Center of Volunteer and Nonprofit Leadership, in observing the inept response by Red Cross after a California wildfire while running billboards using the event to solicit donations, concludes, “I view them more as a fundraising and marketing organization than a disaster relief or charity group.”