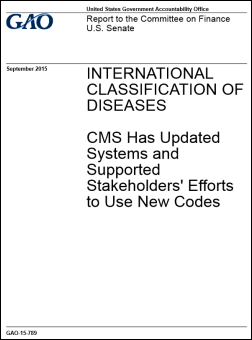 A GAO report says CMS has done everything right in preparing for the ICD-10 switchover next week, but al software changes are likely to have unplanned problems and nobody will really know how well CMS did until it starts processing ICD-10 codes. CMS spent $116 million to update its claims processing systems, with last year’s one-year delay adding to the cost as CMS had to put the ICD-9 logic back in place after the unexpected decision. Problems or not, to get GAO’s blessing for following complex government procedures is impressive.

From Meditech Customer: “Re: Meaningful Use. I’m seeking input from health systems that have undergone a system conversion during attestation. How have you handled the need to have data from the old and the new system available if you changed vendors?” Comments are welcome.

From Tuna Piano: “Re: Epic. I left the company four years ago. The only safe place to comment is from the sidelines. Epic will go after folks who speak ill of them. I know of at least one instance where Epic said they would withdraw from an RFP unless providers who were speaking ill of them stopped. Epic offers a great EMR and is a leader in so many ways, but there is no need to fear fair discourse or interoperability.” Unverified. If true, the most amazing aspect is that Epic’s threat to pull out of an RFP scares prospects so much they’ll squelch their own people. What kind of prospective vendor has that amount of clout?

From CD: “Re: McKesson. I heard they’re doing work with CRM/case management vendor Pegasystems. Could be a future acquisition?”

From Proud Yankee: “Re: Cerner. Interoperability may have gotten them the DoD bid.” The HIMSS-owned publication’s justification of its conclusion (published on July 30, the day the DoD bid was announced) is pathetic, citing a bunch of unrelated facts such as Cerner’s membership in CommonWell, its participation in DirectTrust, and an unsubstantiated claim that the market “perceives” that Cerner is more open than Epic. No evidence was provided that the DoD even considered interoperability as a reason to choose Leidos (and thus its partner Cerner). That may or may not have been the case, but it’s still just time-wasting speculative filler from the cheap sets as to why DoD chose the Leidos bid package and which EHR characteristics they valued since none of us really know. The reporter’s need to fill space is not necessarily congruent with the reader’s desire to get only concise, useful information.

My latest grammar and use peeve: saying “build out” instead of just “build,” which is admirable in trying to make something conceptual seem more concrete by using a construction term, but is still superfluous and therefore annoying. I’m also increasingly peeved when “spend” is replaced with “invest” to editorialize an expense into the financing of a wise decision. It also really bugs me that people (loosers?) who confuse “loose” with “lose” and say something like “I loose my cool.” 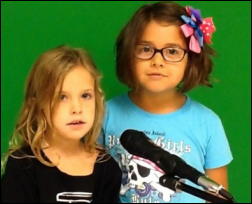 Mrs. Henson says her Arkansas second graders are using the wireless microphone photo booth setup we provider via DonorsChoose to create YouTube videos about what they’ve learned, using a green screen setup to add photos to the produced video. She says, “When a six-year-old has the courage to stand up in front of a small crowd of people and talk using a microphone, then I have created a future leader, or at least a very confident adult.” Another teacher borrows it to create news and events broadcasts that are played throughout the building.

I was thinking about the glut of worthless information contained in the typical patient’s medical record. It would be interesting if the patient and each person who cares for them could electronically flag individual data elements or snips of text as important, taking away the noise caused by capture of pointless click boxes and data points. It would also give the patient a voice in letting caregivers know which items they think are most relevant. Our old problem was that we collected too little data electronically. Our new problem is that we collect too much that isn’t relevant and fail to highlight the important parts. 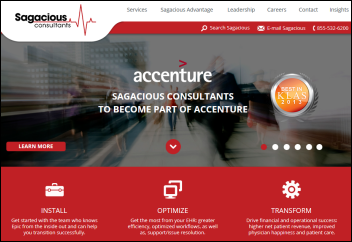 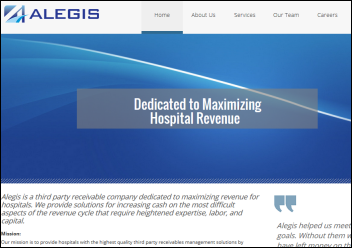 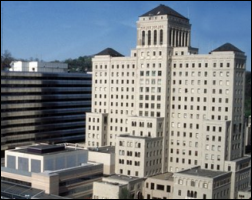 The Central Virginia Health Services FQHC chooses the eClinicalWorks EHR for its 70 providers.

The FHIR team publishes its second DSTU (draft standards for trial use) that includes a simplified RESTful API, extended search and versioning, definition of a terminology service, and broader functionality. This is the final specification before FHIR is published as a standard in 2017.

Leidos donates another $40,000 to Georgia Tech’s Interoperability and Integration Innovation Lab, this time to fund a pilot data analytics platform. 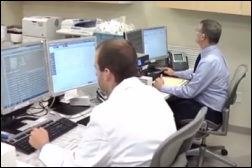 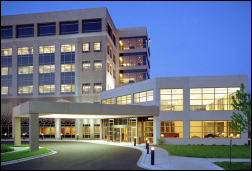 Riverside Medical Center (IL) will implement Epic, planning to go live December 31 for its 325 inpatient beds at a cost of $35 million. 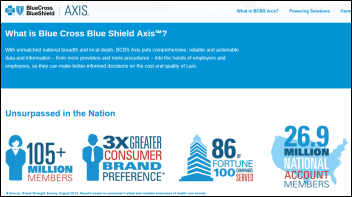 Blue Cross Blue Shield Association announces that all of its 36 BCBS companies will contribute their quality and cost information to BCBS Axis, which will include information on one-third of Americans. Employers will be able to compare cost and outcomes and consumers will have access to provider and procedure information. 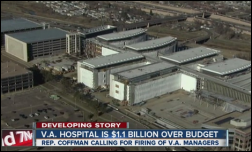 Congress may allow the VA to transfer $625 million from its budget to complete a scaled-back version of its half-built Denver hospital, which is $1 billion over budget.

The federal government’s Office of Personnel Management says that 5.6 million fingerprint profiles were stolen in its June 2015 breach, five times the number it originally reported. That’s an interesting shortcoming of biometrics – unlike a credit card number or password, users can’t simply swap them out once they’ve been compromised. Here’s a question for experts – what could a hacker do with the fingerprint profiles without having the fingerprints themselves? My understanding is that’s what stored is a mathematical model of the fingerprint pattern, which doesn’t seem like it could be used directly to mimic biometric ID. Meanwhile, the government has awarded a contract worth at least $133 million to provide identity theft services to the 21.5 million people whose information was exposed and expects to pay another $500 million for post-breach services.

HP will add Department of Defense-developed malware-blocking firmware to its LaserJet Enterprise printers. 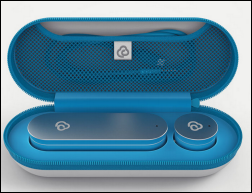 Two Australia-based physicians will sell their CliniCloud kit — a smartphone-powered digital stethoscope and no-contact thermometer – in US Best Buy stores starting in November. The planned retail price is $149.

In England, the Leeds City Council hosts an NHS-funded open source healthcare project called Ripple, directed by a physician who was a chief clinical information officer at the Leeds Teaching Hospital. The Integrated Digital Care Record assembles information from NHS systems into a dashboard (via an integration engine) and offers online appointment scheduling. 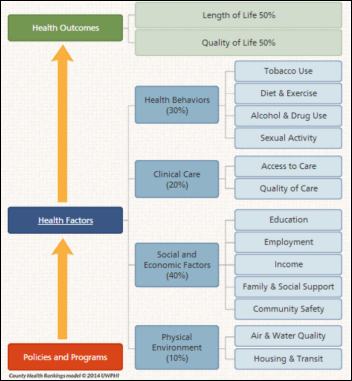 A Forbes article says that deflationary economics (reduced spending) will create startup opportunities in healthcare as it did for efficient online startups such as Amazon, where incumbent healthcare providers locked into a high-cost, poor-service, high-practitioner burnout model are vulnerable to lower-cost startups. It cites a study concluding that only 20 percent of health outcomes are driven by clinical care (“with a few exceptions, hospitalizations represent a failure to extinguish a medical ‘fire’ when it’s small.”) I don’t necessarily disagree, but I would observe that it’s naive to assume that big health systems, insurance companies, pharma, and medical equipment vendors will simply bow to better, cheaper competitors without first unleashing their extensive financial and legislative influence to protect their fiefdoms. The real determinant is the consumer, who despite being characterized as being fed up with the healthcare systems, seems grateful to have access to it even with its obvious faults.

Processed food vendor Nestle moves into higher-margin healthcare products in announcing that it will co-develop an Alzheimer’s disease diagnostic test with a Swiss biotech company. 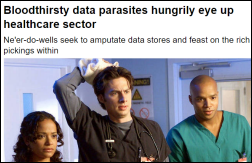 Need a good example of hammy, click-baiting headlines and irrelevant photos? This one takes a dry study and turns it into a comic book just like most of the reader-desperate health IT sites do in sounding like the old Batman show (Pow! Bam! Thwack!)

@JennHIStalk noticed this article describing the 18 bizarre domain names bought by Kaiser Permanente, all variations of HowKaiserKilledMyKid.com. They are registered to MarkMonitor, a Thomson Reuters company that protects brands from being hijacked. 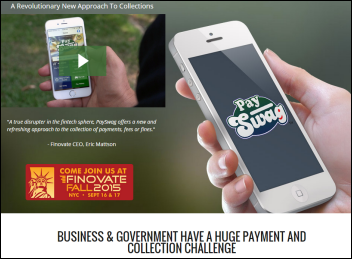 This could be interesting for healthcare. A startup creates a payment collections app that sends payment reminders, rewards customers for paying their bills on time, and the ability to request payment plan changes electronically after losing a job or bearing unexpected expenses. 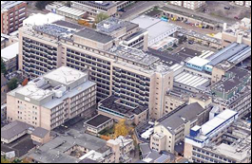 In the UK, Computing magazine digs into the Epic project costs for Cambridge University Hospitals NHS Foundation Trust, which was just put into “special measures” for incurring host of financial, clinical and Epic-related problems. The project will cost $300 million over 10 years, of which Epic will be paid $91 million and the rest is IT infrastructure. Beyond that, the systems Epic replaced will remain in place at an annual cost of $15 million until their information can be migrated to Epic.

A note to vendors: your “how to prepare for ICD-10” articles are too late. It’s here and there’s no time left to start training, analyze the most commonly used codes, or arrange loans in case receivables get hung up.