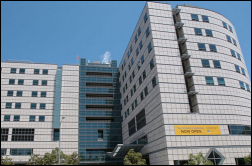 UCLA Health announces that its systems have been breached in a criminal cyberattack, exposing the information of 4.5 million patients. UCLA contacted the FBI in October 2014 when it noticed suspicious activity, but didn’t realize the hackers had gained access to patient information until May 2015. UCLA has hired additional IT security companies and expanded its internal security team in response to the breach.

The many recent healthcare breaches suggest that basically everybody who has ever been a patient or bought medical insurance should just accept the fact that their information could be exposed, causing nothing more than embarrassment other than in the case of identity theft. That makes me wonder which data elements are required to steal someone’s identity and whether providers should be storing those elements given their substandard security. Or if we’re really paranoid about someone finding out about our blood pressure or hemorrhoids (does anyone really care?), whether pre-Internet HIPAA laws should be extended beyond just providers to everybody.

From Publius: “Re: DoD EHR bid. Will announce Friday 7/17 their selection of Epic/IBM for the DHMSM project. IBM is meeting with consulting firms on Monday 7/20 to deliver Statements of Work (SOWs). Seattle/Tacoma area is the first deployment, Washington DC, Europe, then Asia. Consultant pay rates are expected to be below market initially.” Unverified. My insider says Friday at 4:00 p.m. Eastern was the deadline for the DoD folks to turn in their scoring for tabulation following a two-day extension. Unless DoD ignores their stated methodology, nobody knows the winner yet. Maybe next week, although the week after seems more likely. Another source says the announcement date will be August 14. Gossiping about the outcome is fun and I’ve heard a bunch of wild, unverified rumors, such as one of the three bidders failing to make the final cut due to licensing and offshoring issues. I’m trying to picture the reaction in the three camps when the winner is named. Maybe the winner will become so distracted by DoD’s demands that the other two will gain non-governmental market share. Remember NPfIT, where every successful and initially giddy bidder nearly went out of business after failing to meet milestones tied to payments.

From Truven Watcher: “Re: Truven. Rumors are that TriZetto is in talks with Veritas Capital to buy it.” Unverified. TriZetto was acquired last fall for $2.7 billion by Cognizant, which has expressed interest in more acquisitions. 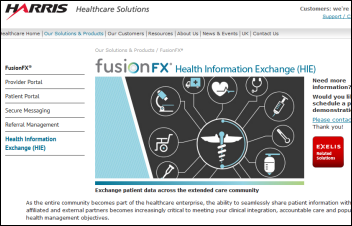 From Mr. Black: “Re: NantHealth acquisition of Harris Healthcare. The best part of the NantHealth purchase is Allscripts gave them $200 million, which they in turn gave them $100 million, but since Allscripts essentially gave them their money back (and then some), they went and purchased a competitor. It’s just laughable.”

From Wintry Mix: “Re: Allscripts. Trying to convince me that they have a truly integrated, single database, single code set acute and ambulatory offering along the same lines as Cerner, Epic, and Meditech. No interfaces, one patient/one record, etc. It wasn’t long ago that Allscripts included zero dollar interfaces between the Touchworks PM and EMR components in their ambulatory contracts since they hadn’t fully integrated the A4 PM system, let alone folding in Eclipsys. Can anyone validate their claim?” 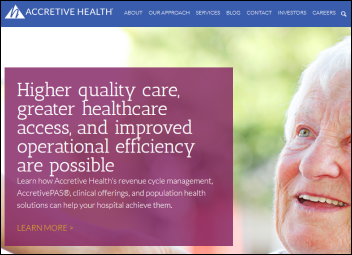 From ThePope: “Re: Ascension Health. The largest Catholic Health System in the world is making a coercive offer to buy one of its vendors at a 50 percent discount to market value, an unprecedented move for a faith-based, not-for-profit system.” Ascension Health makes a lowball offer of half the stock market value of revenue cycle vendor Accretive Health after announcing that it won’t renew the company’s contract, which accounts for half of Accretive’s total revenue. Accretive Health rejected the offer, but its shares tanked that same 50 percent on Friday, wiping out more than $250 million in equity. The company is “seeking strategic alternatives” as shares have dropped 71 percent in the past year. Former McKesson executive Emad Rizk, MD, who took the Accretive CEO job a year ago, saw his net worth plunge $3 million between Friday’s breakfast and dinner as the stock went down in flames following Ascension’s offer/threat.

I was surprised that more than half of poll respondents haven’t completed an Advance Directive, meaning that if they’re lying brain-dead on a ventilator in a hospital bed (after an accident or stroke or whatever tragedy can happen at any time and at any age), they’re sticking someone else with the decision of whether to pull the plug or let them lie in expensive vegetative limbo indefinitely. Take charge before it’s too late – it’s easy to create an Advance Directive and Healthcare Power of Attorney that makes your wishes clear and legally binding. New poll to your right or here, in recognition of summer vacations: how many paid days away from work will you take in 2015?

Thanks to TeraMedica, now part of Fujifilm, which has upgraded its HIStalk sponsorship to Platinum.

A small “my medical records saga” update: I thought I would be clever in sending my CareSync records to my Carebox account using Direct messaging, but CareSync didn’t recognize my Carebox Direct address as valid for some reason even though it allows a Direct address as a “send to” option. I’ve let them know it didn’t work. I also requested to have my PCP’s records added, which is a one-button CareSync click followed by a quick provider database lookup.

July 22 (Wednesday) 1:00 ET. “Achieve Your Quality Objectives Before 2018.” Sponsored by CitiusTech. Presenters: Jeffrey Springer, VP of product management, CitiusTech; Dennis Swarup, VP of corporate development, CitiusTech. The presenters will address best practices for building and managing CQMs and reports, especially as their complexity increases over time. They will also cover quality improvement initiatives that can help healthcare systems simplify their journey to value-based care. The webinar will conclude with an overview of how CitiusTech’s hosted BI-Clinical analytics platform, which supports over 600 regulatory and disease-specific CQMs, supports clients in their CQM strategies.

July 30 (Thursday) 3:00 ET. “De-Silo Your Disparate IT Systems Around the Patient with VNA.” Sponsored by Lexmark. Presenters: Steven W. Campbell, manager of diagnostic applications and interfaces, Piedmont Healthcare; Larry Sitka, VNA evangelist, Lexmark. The entire patient record, including both DICOM and non-DICOM data, should be available at the point of need. Disparate, aging systems that hide data inside departmental silos won’t cut it, nor will IT systems that can’t integrate medical images meaningfully. Learn how Piedmont Healthcare used a vendor-neutral archive to quickly and easily migrate its images and refocus its systems around its patients.

Previous webinars are on the YouTube channel. Contact Lorre for webinar services including discounts for signing up by Labor Day. 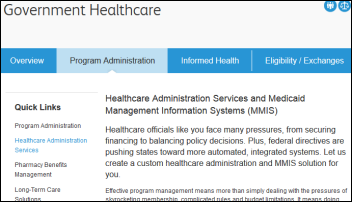 Xerox takes a $145 million charge as it decides to cut back its Medicaid systems business within its Government Healthcare Solutions division. 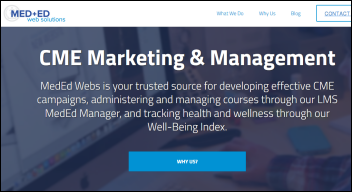 Mayo Clinic licenses its stress level software for physicians, residents, and medical students to Corporate Web Services, which developed the interactive versions of the tools and will market the products through its Med+Ed Web Solutions business. 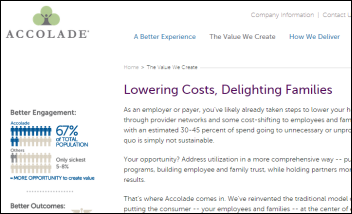 Allscripts reports preliminary Q2 estimates that beat analyst expectations for both revenue and earnings, sending shares up 9 percent on Friday. Above is the one-year MDRX share price chart (blue, down 11 percent) vs. the Nasdaq (red, up 18 percent). 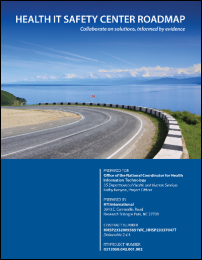 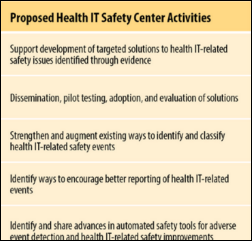 ONC releases its consultant-developed roadmap for a Health IT Safety Center, estimating the cost of operating the public-private partnership at $20 million over five years. The safety center wouldn’t seem to do much actual work for that investment since the proposal says it won’t oversee or investigate anything, won’t collect data, and won’t serve as a Patient Safety Organization. It would mostly just try to get stakeholders together and share information within its core functions of convening, researching, and disseminating. The report suggests that initial funding could come from ONC or AHRQ (assuming the government doesn’t dissolve AHRQ, after which this report seems to suggest that the Safety Center be modeled) and the center would have to figure out how to fund itself by Year 5. It calls for at least 10 FTEs along with IT and travel costs. It’s way too touchy-feely to raise my level of interest and fails to address any pressing issues, such as the need for centralized data collection, incident investigation, and provider safety awareness. It seems like a waste of taxpayer money in the proposed form as it tries to avoid offending anyone, including those who need offending, and how it will eventually fund itself raises interesting questions. I don’t think this will help ONC’s case in trying to convince Congress to underwrite its search for post-Meaningful Use relevance.

A New York Times article notes the ongoing use of HIPAA as a healthcare provider “code of silence” in misinterpreting the law by either ignorance or indifference, such as when a woman called the ED to provide the medical history of her 85-year-old mother and was told they couldn’t take her information because of HIPAA, which led to the doctor ordering a drug to which the patient was allergic. A church stopped listing the names of ill members in its bulletin, with the minister claiming it had to stop because of HIPAA. The article also notes that patients can give consent verbally to allow their information to be shared even though hospitals often require them to sign a form.

A rural Virginia field hospital set up by Remote Area Medical becomes the first US recipient of a package delivered by FAA-approved drone as medical supplies are flown in as a test that also involves NASA. The 10-pound drones were provided by Flirtey, which calls itself “the world’s first autonomous aerial delivery company” in offering last-mile logistics.

A KQED analysis finds that the Bay area has the lowest rate of graduating medical students who continue on to residency in “Dropout Docs: Bay Area Doctors Quit Medicine to Work for Digital Health Startups.” A third of Stanford’s medical graduates effectively end their medical careers by not even applying to residency programs. The article notes that biotech and digital health companies offer opportunities that appeal to new graduates worried about excessive patient loads and lack of provider satisfaction, with one physician adding, “I loved working with patients, but I looked around me and realized that I didn’t want the jobs of anybody who had ‘succeeded’ as a clinician. Tech culture is very appealing when juxtaposed against the hierarchy and myriad hoops to be jumped through in clinical medicine.” 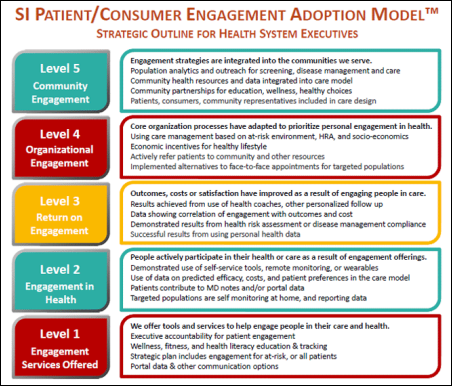 Scottsdale Institute announces its Patient/Consumer Engagement Adoption Model that includes a self-administered assessment. It’s free to all US health systems and clinics. 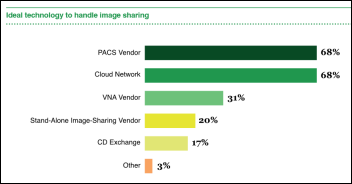 A new, free Peer60 report finds that two-thirds of providers consider image-sharing to be critical, with most of them a lot more interested in receiving images from outside facilities rather than sending them (obviously that’s a problem). Nuance’s PowerShare Network (the acquired Accelerad and SeeMyRadiology.com) had the top market share and market awareness.

Weird News Andy says this story is Finger Kissing Good, in which the CDC quite unnecessarily advises him to avoid kissing pet chickens due to potential salmonella infections. WNA adds some trivia in noting that Peach Melba and Melba Toast were both named in honor of Australian soprano Nellie Melba, which inspired him to christen his seafood creation in honor of his favorite singer Ella Fitzgerald as Salmon Ella.