I’ve been on the road fairly often over the last month. Most of my trips have been to work with small or mid-size provider groups for ICD-10 training. The sheer amount of misinformation floating around the physician lounges across the country appears to be staggering.

At the site I visited today, the physician leaders were actually cringing at some of the questions their providers were asking. I’m sure they thought they had already done a fairly good job educating their providers, but it just goes to show that you can never have enough training. It reminded me a bit of when our residents used to teach a sex education class at the local middle school and kids had the opportunity to ask anonymous (and often myth-laden) questions on slips of paper. We saw some doozies, but this was even more fun because very educated people were asking these wild questions out loud and in front of their peers.

Most of the questions revolved around creative ways to avoid ICD-10 or the lack of need to learn it since it has so many codes it might as well be impossible. It’s hard to convince people that it’s not going away when we’ve had unexpected delays before. It’s also hard to keep them from acting out of fear or panic because they haven’t done anything to prepare for the last several years despite plenty of advance warning. I’m hoping that the fact that their organizations paid good money to bring in an honest to goodness physician to deliver their training will help add a reality check.

Despite the fear and resistance, most of them have done just fine during our structured practice sessions. The fact that they’re using EHRs is going to make the transition pretty seamless, unlike having to use pocket reference cards or laminated cheat sheets.

One of my clients made me smile as their planning document kept going back and forth in email. They wanted me to train onsite at their clinics and were trying to figure out the best way to block schedules and ensure adequate time with the care teams as I crisscrossed the city. When the last document arrived, it was named “Copy of copy of copy of final schedule working copy version8.” I’m glad that explaining document versioning was out of scope for this engagement because I probably couldn’t have done it with a straight face. I give them full credit for trying, however.

Since I had six flights this week, I honed my personal ICD-10 skills:

Unfortunately, I couldn’t find a code for “personal psychotic reaction due to child playing games on iPad without headphones.” so if anyone locates it, please let me know. I heard from a fellow road warrior that there is a restaurant that allows you to relive the glory days of flying as you dine aboard a replica Pan Am 747. I’m thinking it might be time to find a client in Los Angeles so I can check it out.

Mr. H mentioned earlier this week about his LinkedIn pet peeves. Although he focused on problems with user profile pictures, I wanted to throw in my two cents. If you’re going to try to connect with me, I am more likely to ignore you if you use the stock “I’d like to connect with you on LinkedIn” greeting. Even if we just met in passing or you’re a friend of a friend, at least add a personal comment that lets me know you’re not an anonymous “medical researcher” or a medical student from halfway around the world just looking to connect with MDs.

From Jimmy the Greek: “Re: patient recording colonoscopy. Please tell me this is at least as good as a Weird News Andy piece.” Yes, yes it is. A Virginia man receives $500K after recording his physician’s inappropriate comments during a colonoscopy. Although I don’t in any way condone the physician behavior, I wonder why the patient had his phone during the procedure. At most of the facilities where I’ve worked, patients who are being sedated have to put their personal belongings in a locker during procedures. Even if you’re not sedated, I doubt they’d let you take your phone to the GI lab. I’d hope that clinicians would be professional at all times, but this should be a lesson for our colleagues with borderline (or over the line) behavior. 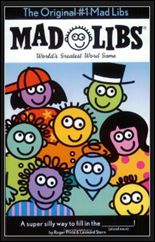 My nephews like to play Mad Libs, the word game where you one player asks for a list of nouns, adverbs, and adjectives then reads back a funny story populated with the words. I received a spam email the other day that must have come from the creators of Mad Libs. Rather than parts of speech, though, it was populated with random, techy-sounding words strung together to form the name of the company and its services. Anyone asking for “thought leadership content” cracks me up, as did the suggestion that the sender had met me at a party at my home in a state where I’ve never lived. Nice try, but no go.

What’s your most entertaining variety of spam? Email me.