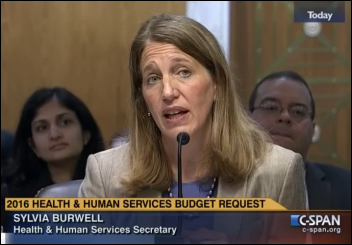 HHS Secretary Sylvia Burwell, testifying on the department’s $84 billion 2016 budget request, is challenged by Sen. Lamar Alexander (R-TN) who stated that half of doctors don’t like their EHRs to the point that they’ll accept Medicare penalties rather than deal with workflow disruption, adding that the AMA found that 70 percent of doctors say their EHRs weren’t worth the cost and that EHRs are the leading cause of physician dissatisfaction. Burwell responded that HHS will work with Congress on a list of administrative action items related to EHRs, which seems to refer to the work of the HELP committee that most recently talked about interoperability and interviewed Epic’s Peter DeVault. What worries me most about the entire exchange is that nobody questioned whether HHS or Congress have any business involving themselves with how doctors use EHRs, where Burwell’s response might have logically been, “Respectfully, our job is making taxpayer payments to providers who choose to participate in Medicare and HITECH, but otherwise the EHRs that providers buy, use, and complain about really aren’t under the government’s purview. We should be monitoring the outcomes, not prescribing the process, which is how government works with all other industries.”

Poll respondents grade the HIMSS conference with somewhere in the C-plus range. A consulting company vendor says it was successful in meeting with clients and networking with peers, while a CIO observes that the HIMSS conference is all sizzle and no steak as it keeps growing and ratio of vendors to providers seems to be going up as well. New poll to your right or here: what do you think about the fact that most health IT vendor executives are white men? (“I’m not thinking about it at all” is a poll option as well). Add a comment to support your position if you like. 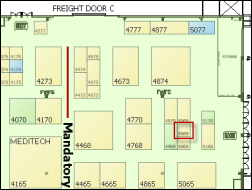 We were signing up for our microscopic booth for HIMSS in Las Vegas and were surprised to find that nearly all of the exhibit spaces have already been taken in the booth signup frenzy that occurs even before the previous conference is over. I don’t have the money or HIMSS points to play with the big boys, but even the 10×10 spaces in weird locations were mostly booked up. The tiniest parcels run around $5,500 and I declined the $2,500 extra HIMSS wanted for a corner space (they didn’t charge extra for our corner spot the past two years). We’ll be in #5069, with our presence probably annoying our next door neighbors Varian Medical Systems and Patient Prompt even though we’ll keep their area busier than it would be otherwise as we have a fun cast of characters running around. At least we don’t have much stuff to stick in there – we brought everything we used in our McCormick Place booth in one large duffel bag and set it up in maybe 20 minutes. There’s no ROI since we don’t have anything to sell, but we like just saying hello and giving our boothless friends a place to hang out. 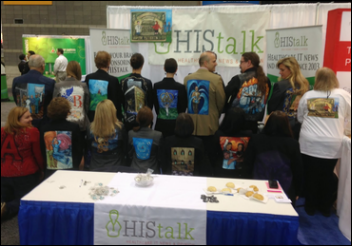 Speaking of our McCormick Place booth, patient advocate Regina Holliday wrote a nice summary of the time she spent there and her HIMSS experience in general.

I forgot to mention an unpleasant encounter Lorre had with the “HIMSS police,” who were a little bit snippy in confronting her at our booth and demanding that we stop using the name “HIMSS Bingo” in referring to a contest that we had nothing to do with other than allowing winners to pick up their prizes there. The HIMSS person was too busy scolding to hear that she had the wrong scoldee.

Most people think of Epic first on the list of Madison-connected companies. Here’s another that just came to me: John Holton, who graduated from UW in 1975, founded Atwork in 1983 and then Scheduling.com (now SCI Solutions) in 1999, although both operated out of California rather than Wisconsin.

Feel free to skip this section if you aren’t following our project as it winds down – the normal stuff follows.

Thanks to new participant The Breakaway Group, who donated $500 to get on Centura SVP/CIO Dana Moore’s dance card. I’ve funded $10,478.21 in projects, including these new ones, including some I chose in Colorado since that’s where Dana lives:

None scheduled soon. Contact Lorre for information about webinar services. 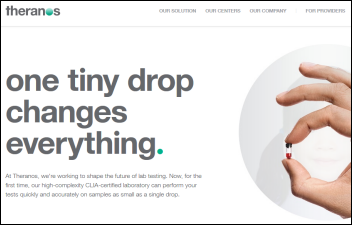 Business Insider runs the first skeptical article I’ve seen about Silicon Valley lab darling Theranos and its $4.5 billion net worth, 31-year-old founder Elizabeth Holmes. Experts say they have no idea how the company’s technology works because Theranos won’t publish peer-reviewed studies about its tests, won’t let independent experts review its labs, and doesn’t acknowledge whether it’s actually using the same analytical machines as other labs in addition to its small-sample size equipment that other labs use as well. The article also questions whether can scale given its plans to perform 1 million tests in 2016, less than 0.2 percent of the number performed by Quest. Quest and other competitors are questioning whether tests performed by Theranos using capillary blood (microfluidics) are accurate. 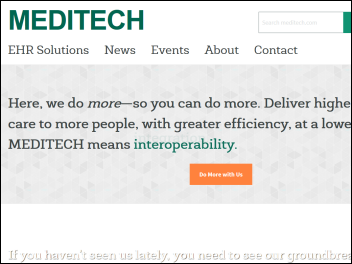 Avera Health System (SD) selects Meditech 6.1 Web EHR for 33 hospitals and 208 clinics. The press release isn’t clear as to whether this is an all-new product and Googling the term “Meditech Web EHR” brings up a non-specific mention on the company’s website, which used to be a no-nonsense list of information but is now maddeningly glossy and detail-free, with artsy scrolling pages and oversized type crying for Internet attention without providing much value in return. Click “EHR Solutions” and you won’t see a list of them. I don’t fully understand how a product can be “groundbreaking” if it’s in version 6.1 or whether this is just a new Web front end for the same old products.

The VA forms an 11-member medical advisory group to advise it on healthcare delivery issues. 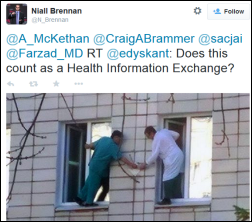 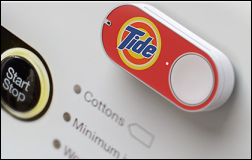 Healthcare is always a lagging chaser of consumer technologies, so I’m not quite sure what to make of the just-announced Amazon Dash, a WiFi-connected, product-specific stick-on electronic button that lets users restock a particular product with a single press. It’s either a brilliant time-saver that creates even more loyalty to Amazon and the products it sells or, as The New Yorker opines, “an uneasy image of our homes as giant Skinner boxes, and of us as rats pressing pleasure levers until we pass out from exhaustion” that bypasses the brief thinking moment of “Why am I using all this stuff?” while driving to the store. I didn’t realize that Amazon already offers a speech recognition and barcode scanning version of Dash for users of its expensive AmazonFresh grocery delivery service in Seattle, California, and New York metro areas.

USA Today profiles the involvement of patients in the EHR selection of Partners HealthCare (MA), which invited a patient who sits on its advisory board to help choose its $700 million system. I like the approach, although I can’t help but think of the economic strong-arming and brand name-brandishing Partners does to squeeze out competitors and force insurers to pay its exorbitant rates, which isn’t really in the best interests of patients or the healthcare economy in general.

An investigation has been underway in Texas to review the state’s issuance of a no-bid Medicaid anti-fraud system contract to a local bidder with zero experience. The Houston newspaper points out that the state was already using a similar system that had recovered $56 million against its original cost of $16 million, while the new $20 million system (with a pending $90 million extension) has recovered zero dollars. Nearly all of the funds came from all of us who pay federal taxes. State government was asleep at the wheel, with a prime example being that the contractor (21CT) billed it the full price of a $452,000 project the day after the purchase order was signed and the state paid it immediately. A few state employees have been fired and a criminal investigation is underway. The state’s HHS inspector general who arranged the deal lied to CMS by claiming that a competitive bidding process had been conducted and then resigned after local newspapers exposed the scandal.